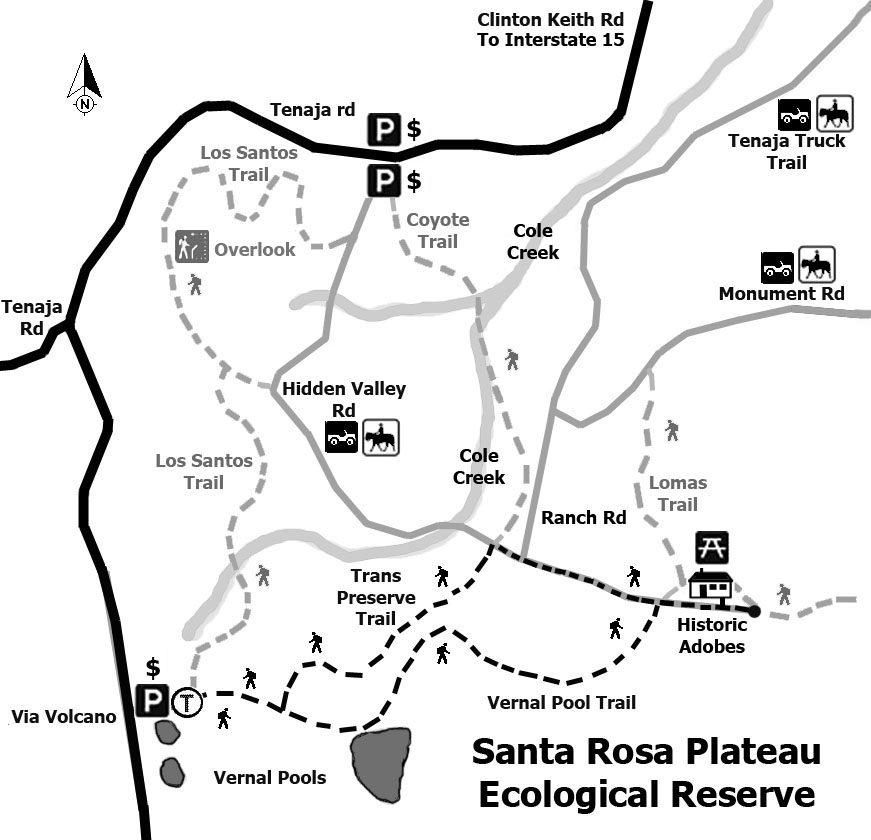 Wonder what Southern California looked like before subdivisions and freeways were built around World War II? The Santa Rosa Plateau Ecological Preserve is a rare gem jut for that. Inhabited for up to 8,000 years by ancestors of the Payómkawichum, the preserve traces its recent history to Rancho Santa Rosa, which was granted to Juan Moreno in 1846. The preserve as we know it today began to take shape in 1984 when the Nature Conservancy made the initial land purchase. It has long been recognized for its significant resources, which include two historic adobes, rare Engelmann’s oak woodlands, volcanic soils with vernal pools, running creeks, over 200 bird species, dozens of mammal species, and more than 50 rare, threatened, or endangered plant species.

A recommended hike is the Vernal Pool Trail to the adobes. The trail to the adobes is surrounded by green meadows that transform to a buttery tan when they dry out in early summer. Occasionally passing beneath occasional massive, ancient, blue-gray Engelmann’s oaks is a treat.

From the trailhead, follow the trail to the vernal pool boardwalk, then continue on the Vernal Pool Trail 1.7 miles to Ranch Road, and turn right, approximately 0.5 mile to the adobes. Returning from the adobes, follow Ranch House Road west to the Trans Preserve Trail, turn left (south). The trail climbs moderately to an oak forest, offering lovely views of the valley and distant ridges. When you reach the Vernal Pool Trail, turn right to return to your vehicle.

We’ve rated the difficulty for this hike moderate, with 300 feet of elevation gain/loss. Horseback riding and mountain biking permitted. There is a day use fee. Before you go, check to ensure the trail is open. More detailed information about the area can be found at the Santa Rosa Plateau Ecological Reserve.

There's so much to see here it’s hard to know where to start. But a must-see, of course, are the vernal pools. Vernal pools form in shallow depressions after rains. They retain water for only a few months and dry out completely in the summer. A number of rare plants and animals have evolved mechanisms enabling them to survive and even depend on these special environmental conditions. Early spring, especially early to late March, is the best time to visit.

The trail includes a boardwalk over a huge vernal pool where, if there has been a good rainfall season, and with some luck, you can search for fairy shrimp and tadpoles typically seen in early spring. Fairy shrimp (Branchinecta spp.) are small crustaceans up to an inch-and-a-half in size that rapidly complete their life cycle when water fills vernal pools. After breeding, eggs settle to the bottom of the pool, to hatch out the next time the pool is filled. Tadpoles will eat fairy shrimp. Also look for the two-striped garter snake (Thamnophis hammondii) that may be sunning itself on the boardwalk, or it might be hunting, in turn, for the tadpoles who just consumed the fairy shrimp. Don't worry though, they are not dangerous to humans.

There's lots for burgeoning botanists to see too. Chocolate lilies, shooting stars, blue dicks, and many other species are some of the attractions on this hike. In 2007, the discovery of a new species of Broadiaea was published in the quarterly scientific journal of the California Botanical Society. Called the Santa Rosa Basalt Brodiaea (Brodiaea santarosae), it is endemic to this location and is on the rare and endangered list of the California Native Plant Society. Only four known populations have been recorded. The small herb has what appears to be six large purplish petals (they’re actually tepals). Allergy sufferers rejoice—its sterile stamens can’t produce pollen.

Also watch for coyotes or badgers. American badgers (Taxidea taxus) are seldom seen, but their dens, which are commonly 6-10 inches high and slightly broader, can be easily identified if spotted.