6 miles out and back 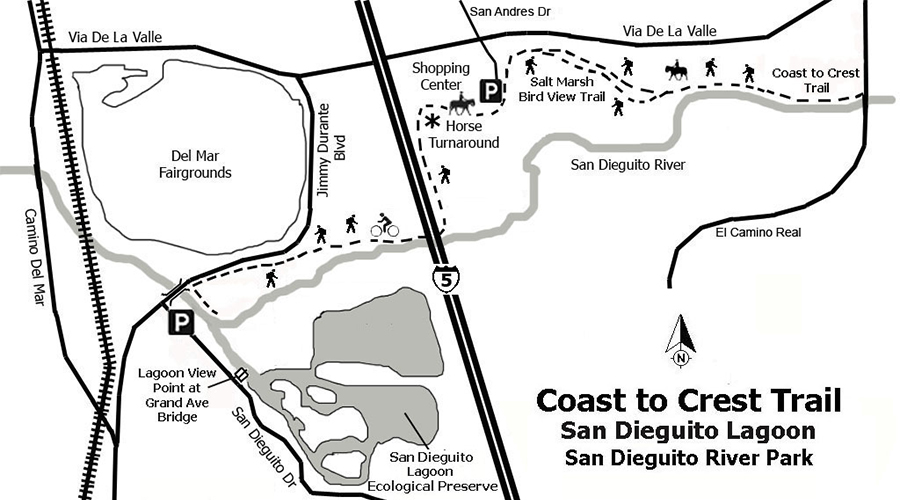 The San Dieguito watershed source is Volcan Mountain with waters flowing west to San Dieguito Lagoon. The lagoon is the current start of the Coast to Crest Trail that follows the San Dieguito River watershed for 71 miles to its source. There are 45 miles of the trail completed with 12 maps covering 14 trails listed at San Dieguito River Park and a QR scan code that can be read using a mobile app to download information at 20 locations along the first 2 miles of the Coast to Crest Trail. The official San Dieguito Lagoon Staging Area is off San Andres, which is an alternate starting point for this hike that makes it shorter in length. This particular hike, however, begins further west.

From the parking area, go to Jimmy Durante Boulevard and turn right, walking east until directly on the bridge, where 500 feet southeast is the Grand Avenue Bridge Overlook. Once past the bridge, make another right turn to the large San Dieguito River Park sign. Once past the bridge, you will come to the large San Dieguito River Park sign. From this point, one can access the short Boardwalk Trail along a portion of the river or start the Coast to Crest Trail. Originally, the Boardwalk continued along the river and was to be the western end of the Coast to Crest Trail along Jimmy Durante Boulevard. Now it is truncated to a few hundred yards where a turnaround and viewing platform have been established.

To start the Coast to Crest trail, continue east from the River Park sign towards the I-5 underpass. Continue on the Lagoon Trail under I-5, then past San Andres Drive where there is a slight incline onto the Salt Marsh Bird View Trail. From there, follow the trail to El Camino Real, viewing the river whenever it is not hidden by the taller riparian plants. There is a riding school and horses in paddocks on the north side. At El Camino Real, turn around and head back to your vehicle. If parked at the end of San Andres Drive, modify the walk appropriately.

We’ve rated the difficulty for this hike easy, with minimal elevation gain. Before you go, check to ensure the trail is open. More detailed information about the area can be found at San Dieguito River Park.

Between birds and history, there’s a lot of flying stories here. In the 1920s there was a Navy emergency airfield here named San Dieguito Field, later noted in the Del Mar Racetrack song “Where the Turf Meets the Surf...take a plane.” During WWII there were two blimps at the airfield in support of the anti-submarine patrols. The airfield was assigned to the Navy until returned to civilian control in 1947 when it was named Del Mar Airport. The airport was closed in 1959 for the I-5 right-of-way with a remnant of a blimp mooring dock circle seen on the west side until 2006.

Keep an eye out for American kestrels (Falco sparverius), North America’s smallest falcon, which is the size of a dove. Look for kestrels on the top of poles or perching on wires. They have a tan to reddish-orange back and tail with vertical black bars around the throat. Males have deeper colors and blue-gray wings.

From the Boardwalk, you’ll see nests under the Jimmy Durante Boulevard bridge that are built of mud pellets and fibers and are used by birds that fly with open mouths, scooping up both insects and water as needed. The nests belong to cliff swallows (Petrochelidon pyrrhonota), which have square-tipped tails, brick-red faces, dark backs, whitish foreheads and bellies, and pumpkin-colored rumps.

Once near the I-5 underpass, look for a mix of California horn snail shells, shore crabs with symmetric claws, and fiddler crabs (Uca pugilator), named for the males that have one large claw. Fiddler crabs shift through the sediment for anything edible, making them detritivores, or animals that feed on dead organic material. Detritivores are important decomposers adding to the nutrient cycle.

Other birds that you might see here include the western sandpiper (Calidris mauri), the willet (Triga semipalmata), and the lesser scaup (Aythya affinis). The western sandpiper is one of the most abundant shorebirds in North America. It is a migrant that breeds on the tundra in western Alaska and winters on the shores of much of North America. Look for a small bird plain gray on top and mostly white on the bottom with dark legs and a dark slightly curved bill. Before it departs in the spring, it grows many chestnut-red feathers on the upper parts.

The willet is another bird in the sandpiper family but is much larger than the western sandpiper with gray legs and a long, dark straight bill. It is dark gray above and lighter beneath with a stocky build. In flight, it shows a bold black and white stripe on its wings. The tail is white with a dark band at the end. Also a migrant, it winters in the same locations as the western sandpiper and forages for similar but larger food.

The widespread lesser scaup is a medium-sized duck with a bluish bill with a black tip. Males have a black head, neck, chest, and tail, a gray back, and white sides. Females are mostly brown with a contrasting white face. The chicks can dive on the same day they are hatched but can only stay under for a moment because they are so buoyant, which makes watching them extra cute.

From I-5 go west on Via de la Valle for 0.3 mile. Turn left onto Jimmy Durante Boulevard. Go 0.9 mile. Just after crossing the bridge over the San Dieguito River, turn left onto San Dieguito Drive. Go 0.3 mile and park in the Lagoon Viewpoint at Old Grand Avenue Bridge lot on the left. For a shorter hike, park at the San Andres trailhead. From I-5 go east on Via de la Valle. Turn right on San Andres and park. Access trail at kiosk. Trailhead GPS: N32.96775, W117.26012