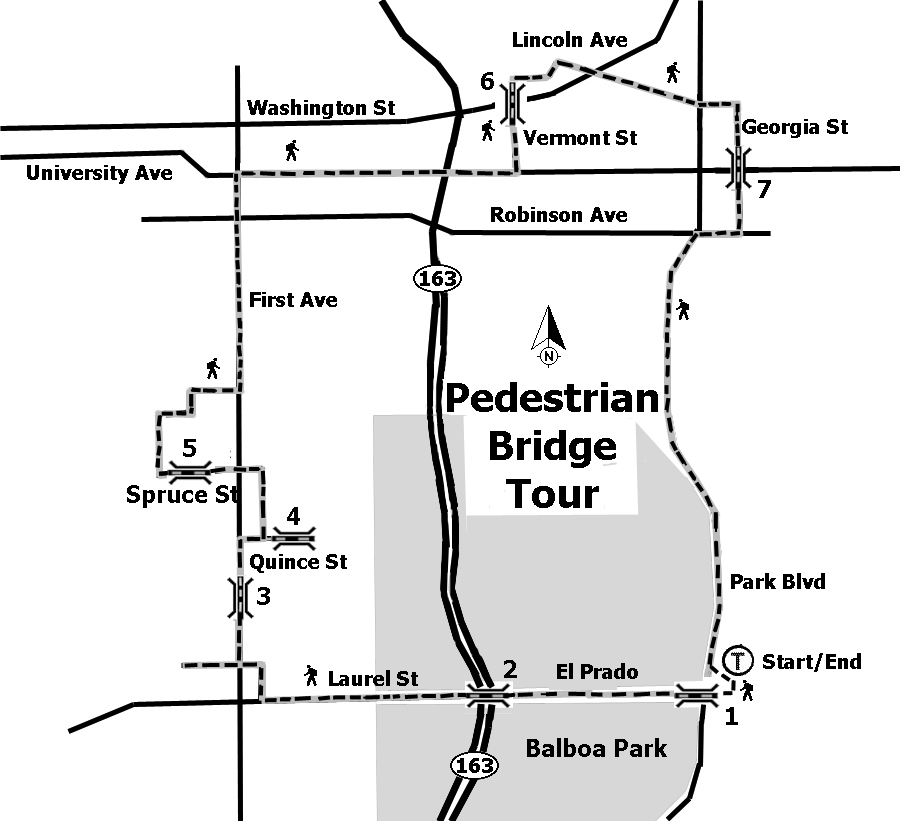 You don’t have to pull on heavy hiking boots to enjoy a bit of nature and history. The Pedestrian Bridge Tour, often called the Seven Bridges Trail, takes you on an urban hike through Balboa Park, Banker’s Hill, and Hillcrest so you can experience a bit of early San Diego history.

Start at the east side of Park Boulevard and Village Place at the Inez Grant Parker Memorial Rose Garden. You can view the adjacent xeriscape garden before crossing the first pedestrian bridge over Park Boulevard towards The Nat (wave hello!). From there, follow the map closely and you’ll eventually cross the Cabrillo Bridge built in 1915 (sometimes called the Laurel Street Bridge), then the 1931 First Avenue Bridge for a view of Maple Canyon, the Quince Street Bridge, the 1912 Spruce Street Suspension Bridge crossing over Kate Sessions Canyon, the Vermont Street Bridge, and finally the 1914 Georgia Street Bridge now designated as a local, state, and national landmark. Turn left or west on Robinson Avenue and then left or south again on Park Boulevard to return to the start.

Before you go, check to ensure the trail is open. More detailed information about plants, wildlife, history, and geology of the area can be found at Balboa Park.

With murals, commemorative plaques, and buildings of note, there is so much history on this walk it would take a whole book to explore. To begin, the Inez Grant Parker Memorial Rose Garden is one of only 10 U.S. gardens (as of 2015) to receive an “Award of Excellence” from the World Federation of Rose Societies. Built for the 1915 Panama-California Exposition, the Cabrillo Bridge was the first multiple-arched cantilever bridge in California and spanned a small lake. When crossing 2nd Avenue, you’ll be able to view one of the 10 churches renowned architect Irving Gill designed on the southwest corner.

The Quince Street Bridge is a wooden trestle bridge built in 1905 with a construction cost of less than $1,000 to allow an easier access to the 4th Avenue trolley station. When you reach the Vermont Street Bridge, you’ll see inspiring quotes on the panels that span the bridge. Built in 1995, it replaced a 1916 wooden trestle bridge that allowed residents to access the University Avenue trolley line that was the primary transportation corridor in San Diego from 1888-1949. The Georgia Street Bridge was originally built in 1907 as a redwood truss bridge. It was constructed after the ridge was cut to allow the streetcar line to extend eastward to Fairmont Avenue, opening North Park and other surrounding areas to development. In 1914, the current concrete bridge was built and is now designated as a local, state, and national landmark.

Naturally there’s wildlife to be found here too. Red-tailed hawks are often seen over Balboa Park. Keep an eye out for insects, like various butterflies and figeater beetles (often mistaken for green June beetles or Japanese beetles). You can also find lizards like green anoles, or see which birds you can spy out in trees and bushes, and of course there’s any number of finds for sidewalk botany enthusiasts.

We share more of the history found on every turn of this walk in our book (linked below).