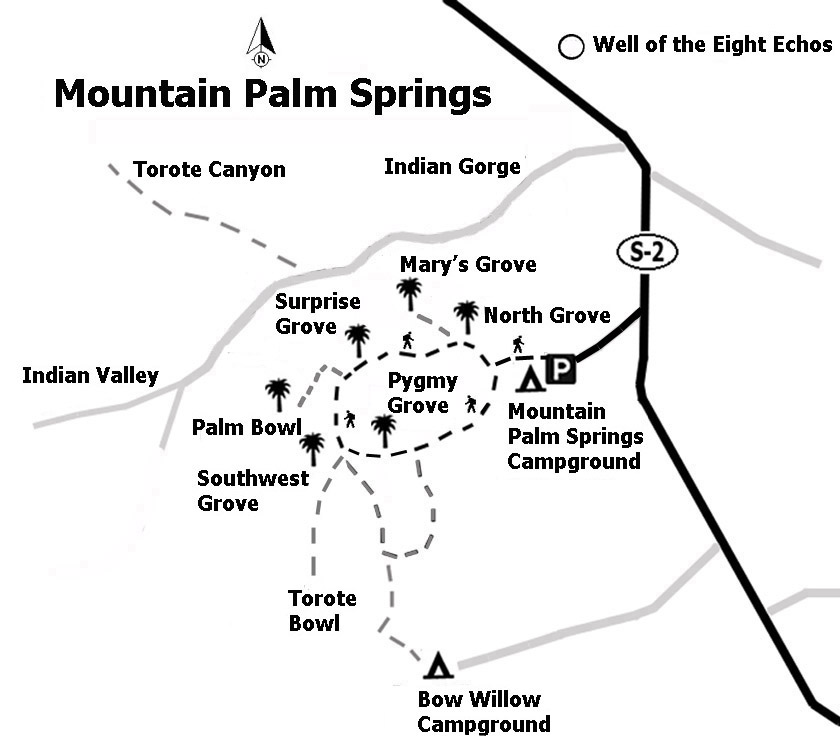 Explore beautiful desert palm groves in the southern Anza-Borrego Desert State Park at the foot of the Tierra Blanca Mountains. Six oases with well-established trees provide shade for hikers and a nice respite for wildlife with intermittent streams of water. The palms are ancient remnants from a time before there was a desert when the climate could accommodate more tropical plants.

This loop of almost 3 miles visits four groves, starting from an interpretive panel at the trailhead. First is Pygmy Grove on the north side of the trail with almost 40 trees. You’ll see many with burned skirts and trunks from a fire, but very much alive with new seedlings in the grove. The trail curves to the left and then back to the right following a ridge west that leads to Southwest Grove with well over 100 trees. This grove is about 0.5 mile from the beginning trailhead. If hikers want to extend this loop hike by a mile, they can follow the well-marked trail up the steep ridge to the south another half-mile to Torote Bowl where several elephant trees are found.

Across from the Torote Bowl trail sign is a narrow and rather obscure trail that climbs a ridge on the north side next to a tagged elephant tree. This is the trail to Surprise Grove that drops into the next canyon after a little more than a 0.5 mile. Surprise Grove has over 30 trees. Up-canyon less than 0.5 mile from Surprise Grove is Palm Bowl tucked into a large mesquite-filled bowl with well over 50 trees. Retrace your way back to Surprise Grove and follow the canyon down another half-mile to the junction with a canyon leading north to North Grove and Mary’s Grove. The 2.5-mile loop hike turns right and heads back to the parking area and trailhead that is clearly visible.

We’ve rated the difficulty for this hike moderate, with elevation gain/loss of up to 500 feet. Dogs are not allowed. Vault toilet at entrance. Before you go, check to ensure the trail is open. More detailed information about the area can be found at Anza-Borrego Desert State Park.

Approaching the trail, you’ll find a rich desert scrub community consisting of several varieties of cactus, ocotillo, creosote bush, white bur-sage or burrobush, and desert holly (Atriplex hymenelytra), a silvery-gray to white shrub with red fruit that is the most drought-tolerant saltbush in the desert. The surrounding hillsides are covered with tall barrel cactus and occasional milkweed. Brittlebush or encelia and white rhatany or krameria are all found along the trail.

With a large leaf surface exposed to the sun and a short root system, the native California fan palm (Washingtonia filifera) is an unlikely desert plant with its rapid rate of water evaporation and its dependence on water. However, an underground water source close to the surface allows the roots to sit in water.

Honey mesquite (Prosopis glandulosa) is in the canyon drainage and was a major source of food for Kumeyaay ancestors. Mesquite and desert agave were the two major plants harvested in the desert with major seasonal home sites located near these two resources, along with a water source and granitic rocks that could be used to process these plants. The two major higher elevation plants needed for survival were oak trees for their acorns and pine trees for their pine nuts. The commonality for these four food resources is the abundance that could be harvested in some years and the ability to store them for use during times of famine.

Finally, there’s a small chance of spotting a great horned owl (Bubo virginianus) near the palm groves. It has two long ear tufts and large yellow eyes. The eyes do not move in their sockets, but the owl can swivel its head 180 degrees to see in any direction. It is a fierce predator that can take large prey. The female is larger than the male.