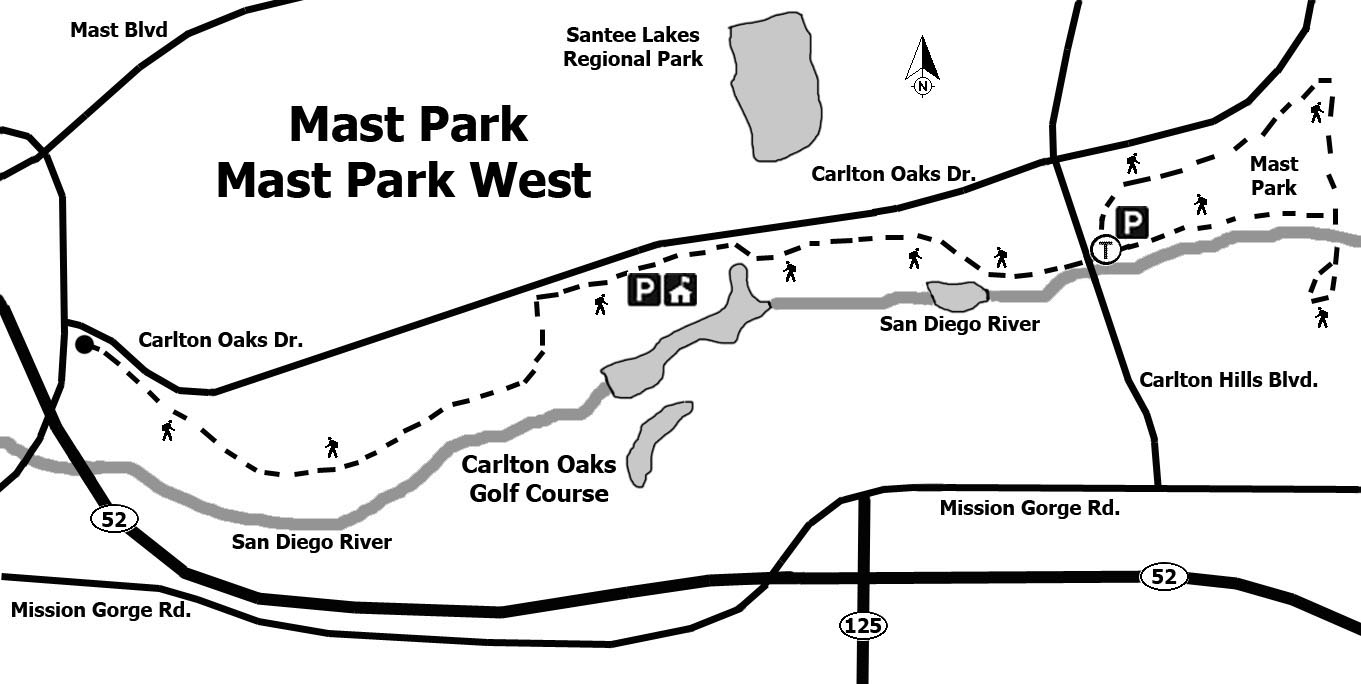 Mast Park and Mast Park West are trail segments along the San Diego River Trail, a regional multi-use trail that will someday make it possible to trek from Ocean Beach to the mountains near Julian. Each trail segment has its own management jurisdiction and works with the nonprofit San Diego River Park Foundation and the State of California’s San Diego River Conservancy for the common goal of preserving riparian habitat and completing this contiguous regional trail of over 50 miles. This segment of the trail offers an easy stroll under trees and by waterways and follows the San Diego River through the community of Santee, currently ending at a local golf course. There are benches to sit on, a native plant garden to explore, and spots to look out on the river. There are interpretive signs telling about the river ecosystem and enough open space to forget about busy city life.

Loop trails for both Mast Park and Mast Park West begin at the welcome sign off the parking lot. Facing the sign, there is a road off to your right that descends to another lot where the walk to Mast Park West begins by going under the Carlton Hills Boulevard bridge. The Mast Park West trail also begins on the other side of Carlton Hills Boulevard at a kiosk and small picnic area near a small shopping center. From both entrances the trail follows the river west and then runs alongside a golf course. Along here the trail becomes the San Diego River Trail and winds around near CA-52. This is a longer walk than Mast Park to the east.

Before you go, check to ensure the trail is open. Visit the City of Santee website to learn more.

There are numerous bird species to observe along the waterway. It is home to the endangered least Bell’s vireo and the California gnatcatcher, as well as providing habitat to attract the southwest willow flycatcher. Birds to note include the great blue heron, great egret, Cooper’s hawk, red-shouldered hawk, mallard, American coot, acorn and Nuttall’s woodpeckers, belted kingfisher, and black phoebe. Anna’s hummingbird can be observed year round. During the spring and summer, numerous species stop here including the lazuli bunting, black-chinned hummingbird, cliff swallow, and Bullock’s oriole (Icterus bullockii), which prefers tall trees in open woodlands along streams. Look for a brilliant orange bird with a black stripe through its eye, a black crown, throat, and back, and dark wings with a white patch. Females, mostly pale gray and dull yellow, build a hanging nests in trees, weaving them from fibers, grasses, hair, and litter, like balloon ribbons, and line the nests with willow cotton and feathers. Bullock’s oriole forages for caterpillars, other insects, and flower nectar. Watch out for other animals too, like the western pond turtle, the two-striped gartersnake, western fence lizard, and butterflies, including the tiger swallowtail, mourning cloak, and monarch.

Although invasive and nonnative plants grow here, there are ongoing efforts to restore the native habitat. The riparian habitat along the river contains cattails and bulrushes that filter the river water. It also has tall western sycamores, willows, and western cottonwoods with an understory of mule-fat and yerba mansa. Toyon and blue elderberry grow by the trail as well as coyote melon, wild grape, wild-cucumber, and jimson weed (Datura spp.).

Jimson weed is in the nightshade family (Solanaceae), containing several plants that are toxic to both herbivores and humans, including henbane, deadly nightshade, tobacco, and mandrake. They contain alkaloids, such as cocaine, belladonna, and atropine that are not only potentially lethal but can have medicinal or hallucinogenic effects, depending on the specific chemical and dose. These alkaloids affect the central nervous system including cells of the brain and spinal cord. Chinese traditional medicine uses tropane alkaloid-containing plants to treat a variety of ailments while Kumeyaay shamans prepared toloache or jimson weed, containing scopolamine—a highly poisonous hallucinogenic drug, for use in their initiation ceremonies. Local Kumeyaay, Luiseño, and Cahuilla Indians also used jimson weed for medicinal use to mitigate the pain of childbirth, as a general painkiller for setting bones and toothache, to cure hemorrhoids, and for making a paste to treat venomous bites of snakes, tarantulas, spiders, and insects.

The plant was made famous by artist Georgia O’Keeffe. There are two native species in the county. Western jimson weed (Datura wrightii) is a large herbaceous perennial, two- to three-feet tall. It has a large, white, and lavender-tinged, trumpet-shaped flower with a white throat. Desert thornapple (Datura discolor) is a smaller herbaceous annual, one- to two-feet tall. It has a striking purple patch in the throat of the trumpet-shaped white flower. Thornapple refers to the thorny fruit of Datura species.