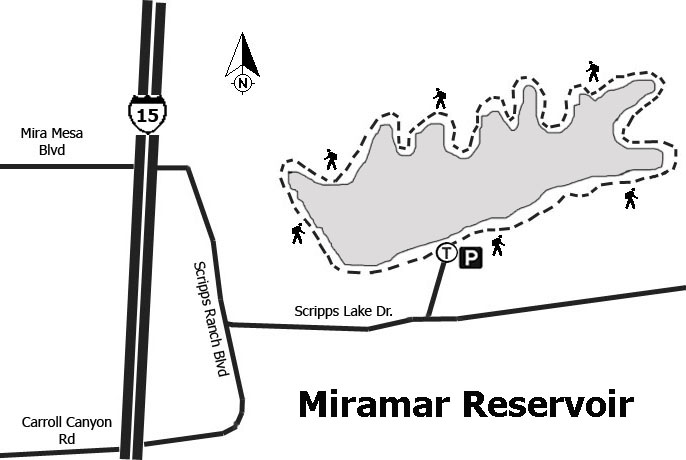 Lake Miramar Reservoir was created with the construction of a dam in 1960 as part of a San Diego Aqueduct project with water from both the Colorado River Aqueduct and the California Aqueduct. This City of San Diego facility can store 6,682-acre feet of water while providing recreational opportunities that include fishing, boating, birding, walking, jogging, or cycling around the 4.92-mile paved service road around the man-made lake. It’s also wheelchair accessible. Leashed dogs are permitted on the service road but must remain 50 feet or more from the water at all times.

The lake is part of the Scripps Ranch area that was once owned by newspaper publisher E.W. Scripps and his philanthropist sister, Ellen Browning Scripps. When the property was purchased in 1890, there were no buildings to obstruct the view of Mount Soledad and the Pacific Ocean, so it was named Miramar, Spanish for “sea view.”

Bring your binoculars! There are lots of birds to see here, including cormorants or pelicans competing with anglers for bass, bluegill, or sunfish. Mallards, lesser scaups, redhead, gadwall, northern shovelers, and ruddy ducks are found on the lake, depending on the season. The ruddy duck (Oxyura jamaicensis) is a small duck most commonly seen in San Diego from October to April, though it is more easily recognized during the breeding season, when the males have a sky-blue bill and mostly ruddy plumage.

Chaparral plants include chamise, black sage, manzanita, monkey flower, and coastal sagebrush, plus some species that are either difficult to spot or rare. These include canchalagua (Zeltnera venusta), and spineshrub or adolphia (Adolphia californica) which is listed as a rare, threatened, or endangered shrub in California by the California Native Plant Society but is considered common elsewhere. On these plants look for webs of tangle-web spiders (family Theridiidae). Potentially the most well-known tangle-web spider in the county is the black widow (Latrodectus hesperus) recognized by the red hourglass shape on the underside of the abdomen and the messy, irregular web. Some researchers think that the black widow is being outcompeted by non-native brown widows (Latrodectus geometricus) in much of the county. Many other species of spiders are present in the county too, continuously providing insect control services.