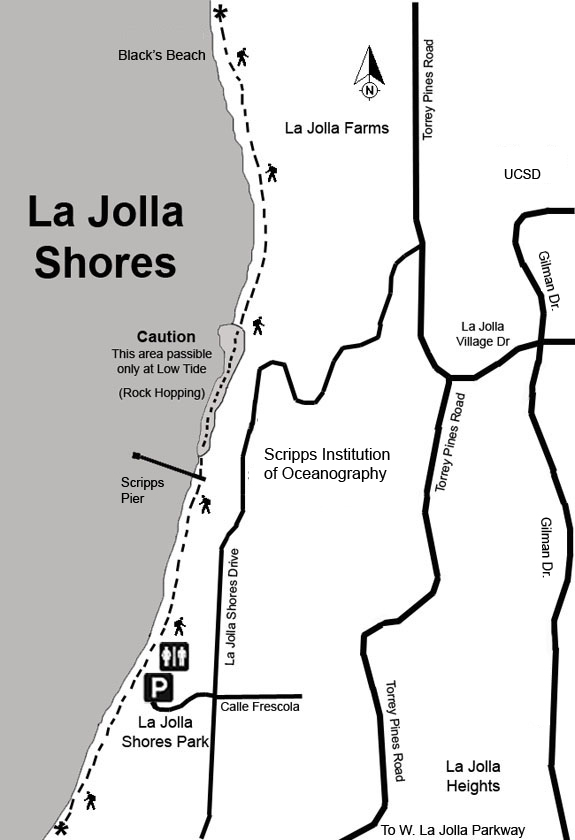 Keep an eye on the tide schedules, get up early on the weekend, and head down to La Jolla Shores for a relaxing and fascinating hike to the tide pools. The best time to arrive is at or a little before low tide. High tide will cover the tide pools and cut the hikeable beach route by more than half. There are tide pools both to the north and to the south of the park on the beach, so choose either direction or start at one end and work your way to the other.

Walking about half a mile to the south, you will come to the end of a row of red-roofed buildings. If the tide is low enough, walk around the corner toward smooth, flat-topped black rock formations that host many small tide pools.

If choosing to walk along the beach about 0.5 mile to the north, just past Scripps Pier, there is another set of tide pools in a rocky area with some very interesting rock formations in the Scripps Coastal Reserve area. Some of the rocks feature large swirl patterns hinting at ancient earthquake activity. As you explore the tide pools on this side, be aware that what looks like pieces of shells scattered among the rocks may actually be covering dozens of sea anemones. Take care to avoid stepping on them. In fact, it’s a good idea to watch your footing, since the rocks can be slippery and the waves can surprise you when they shoot up between rock crevices.

Continue past the tide pools all the way up to Black’s Beach for a longer distance, about 5 miles from the south to the north during low tide. The tide pools here are part of designated marine protected areas, similar to state parks. Collecting any living marine resources is prohibited by the public in these areas, which in part is what helps them retain integrity and makes them such good places to go tidepooling.

Before you go, check to ensure the trail is open. More detailed information about plants, wildlife, history, and geology of the area can be found at City of San Diego La Jolla Shores.

Sea anemones, small crabs, and fish frequent these hiding places. If lucky, you might spot the occasional nudibranch or sea slug (class Gastropoda), a small but often spectacularly-colored soft bodied, gastropod mollusk. The bright colors on nudibranch serve to warn potential predators of their poisonous nature. The name nudibranch refers to the fact that they do not have a hard body shell but are “nude” instead, relying on chemical rather than physical defenses. A particularly spectacular and common nudibranch is the Spanish shawl (Flabellina iodinea), easily identified by its purple main body and bright orange cerata, or horn-like protrusions. You may also encounter a California aglaja (Navanax inermis), which is not a nudibranch despite also being brilliantly colored with bright blue, orange, and white on a black body. In fact, the aglaja is a sea slug that is a predator of nudibranchs!

In addition to the sea creatures, many shore birds enjoy these beaches. It is common to see brown pelicans and you may find yourself within a few feet of long-billed curlews, marbled godwits, plovers, and killdeer, as well as the ever-present western gulls. The killdeer (Charadrius vociferus) is San Diego County’s most widespread shorebird and can be found in dry areas too. Killdeers have a large rounded head, large eyes, and the short bill characteristic of plovers. They are tan on top and white below with two dark bars across their chest and white and black patches on their face. When disturbed, they take flight and let out a shrill loud cry that almost sounds like “kill-deer,” which is how the common name came to be. Though they probably don’t have a grudge against deer.