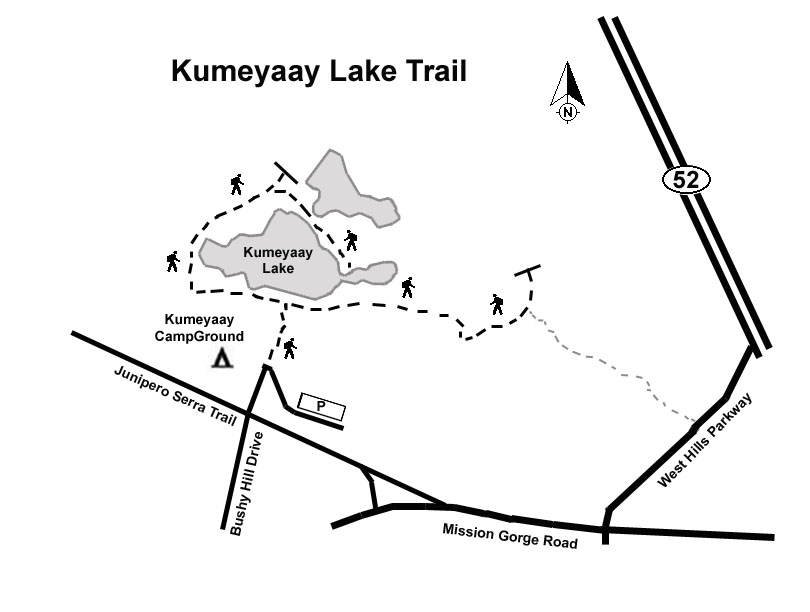 Kumeyaay Lake Campground is part of the over 7000-acre Mission Trails Regional Park, owned and operated by the City of San Diego. At one time the lake was part of a sand and gravel mining operation until the early 1970s. The H.G. Fenton Material Company’s Monarch Plant produced concrete, plaster, and gunite sand. After the lake was mined out, it was turned into a camping and fishing facility called Hollins Lake Fish Farm and Lake Recreational Facility, named for Mary Hollins who was instrumental in creating a facility where seniors could fish. The rehabilitated-habitat area was planted with riparian vegetation, especially willow. The willows along the streams and lakeshore grew into thickets attracting the least Bell’s vireo (Vireo bellii pusillus), designated endangered by the US Fish and Wildlife Service.

The facility was closed in 1985, and the area north of the lake became a least Bell’s vireo mitigation site for the California Department of Transportation CA-52 freeway project. Today, the lake can no longer be circumnavigated because the north side of the lake is closed off by locked gates to protect areas where the least Bell’s vireo nests. Listen for its song, a fast, nasal, angry-sounding “don’t-you-tell-me-what-to-do.” Now renamed Kumeyaay Lake, the lush vegetation has created a first-class botanical and wildlife habitat with both riparian and chaparral plants. In December 2000, Mission Trails Regional Park opened the campground with 46 primitive sites for tent camping and recreational vehicles. With budget cuts, the campground is for camping open only Friday and Saturday, while the rest of the week it is open only to day use.

Before you go, check to ensure the trail is open. Visit the Mission Trails Regional Park website to learn more.

From the parking area, walk north toward the lakeshore, past restrooms and picnic areas, where short paths lead either left or right. Interpretive signs here depict many of the birds that can be found around the lake, including the blue-gray gnatcatcher, California quail, great blue heron, great egret, Anna’s hummingbird, western scrub-jay, red-winged blackbird, and the least Bell’s vireo, among others. Also watch for birds of prey including the osprey, various hawks, and the great horned owl. The sounds of birds and running water are joined in the late afternoon with the sounds of crickets and bullfrogs. Waterfowl glide across the lake surface making hypnotic kinetic ripples.

The trail to the left or west crosses over a cement bridge that allows water from the San Diego River to flow into the lake. Just beyond are a small amphitheater and a replica of a Kumeyaay ‘ewaa, a hut made from the branches of willows. Slightly further is the locked gate beyond which there is no entry. However, just to the south of the gate is a 0.1 mile shaded trail that leads to a view from the center of the lake. Shade trees around the lake include western cottonwoods, western sycamores, willows, and mule-fat. From this point retrace your steps back to the interpretive signs, which completes 1 mile. For a second mile, explore the route to the right or east until you reach the second locked gate on the north side of the lake. Plants that may be in bloom include the yellow Hooker’s evening primrose, the pink California wild rose, whitish-pink California buckwheat, a golden prickly-pear, the white blooming yerba mansa or lizard tail, yellow dandelions, mustard, and pink thistles. Also in early spring look for curly dock, white-blooming ceanothus, jimson weed, horehound, and tree tobacco.