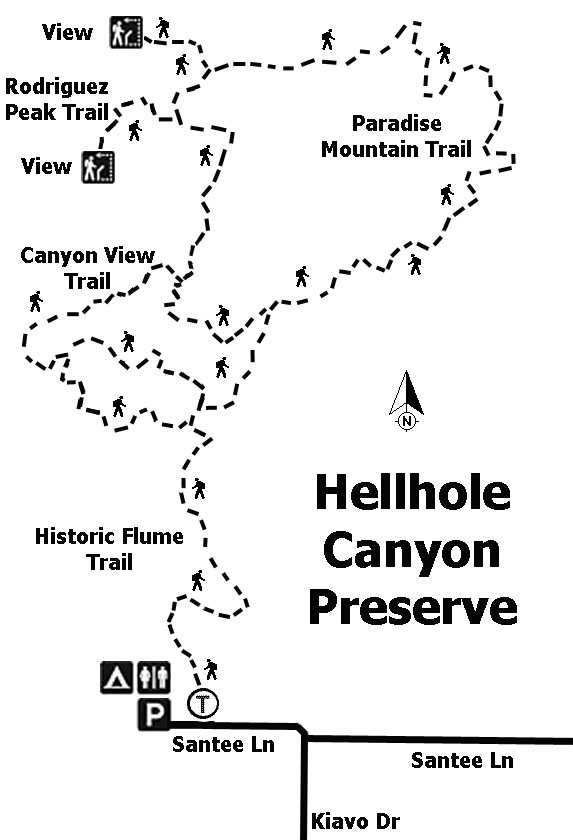 The 1,907-acre Hellhole Canyon Preserve east of Valley Center is a valuable resource for wildlife, hikers, and equestrians, with running water and a scenic canyon. It is a place to learn about the early history of water transport while observing ecological changes during fire recovery. Hell Creek, which ironically flows into Paradise Creek, runs for about 3 miles through the preserve.

From the staging area, the first 0.25 mile of the trail is a gentle self-guided nature trail with signs identifying some of the major chaparral plants. The next half-mile leading down to Hell Creek has some steep places where trekking poles would be useful. The trail along the creek is nearly flat as it follows the contours of the hills for the next 1.3 miles angling progressively further from the creek. The trail ends 2 miles from the staging area. Older maps show the trail continuing for an additional 0.5 mile, but it has since washed out. The trail going down to the creek and to the steel siphon (more on that later) is, as of this writing, closed for habitat restoration. Those wanting a much longer and more strenuous hike can take the Canyon View Trail leading steeply up the hill.

Before you go, check to ensure the trail is open. More detailed information about plants, wildlife, history, and geology of the area can be found at Hellhole Canyon Preserve.

Despite its name, Hell Creek is a beautiful bubbling stream lined with sycamores, coast live oaks, and willows. The majority of the preserve is filled with chaparral and coastal sage scrub, although there are patches of oak woodland in several of the smaller canyons and a continuous oak woodland ribbon and riparian community along Hell Creek.

One of the birds that frequents chaparral and coastal sage scrub is Bewick’s wren (Thryomanes bewickii), a small gray-brown songbird with a fairly long tail crossed by fine black bars, tipped with white spots, and flicked energetically. It has a long white eyebrow and gray-white underparts. Keep an eye out for it in the bushes where it looks for insects.

The preserve’s terrain is fairly rugged, with a major part of the preserve on the southwest facing slope of the 3,886-foot-high Rodriguez Mountain. There’s a lot of water history here. The Escondido Canal (or Gamble Flume) was built in 1895 to bring water to Escondido. It consisted of long sections of a hand-dug ditch connected with a wooden flume. The canal still exists today, but it has been replaced by steel and concrete and now bypasses most of Hellhole Canyon after crossing it via a steel siphon.

Hellhole Canyon Preserve was completely burned by the Paradise Fire in 2003 and parts of the preserve were burned again in 2007 in the Poomacha Fire. A visit to the preserve shows how the coastal sage, oak woodland, and chaparral plant communities can recover from fire. While the charred, twisted branches of the burnt brush are still visible, the preserve is alive with vigorously growing sage, manzanita, toyon, scrub oak, ceanothus, and many other species that have sprouted from stumps not killed by the fire. The fire also opened up the thick brush, giving seeds that had been lying dormant a chance to sprout, thus providing fresh new forage for wildlife and a great annual wildflower display in spring.