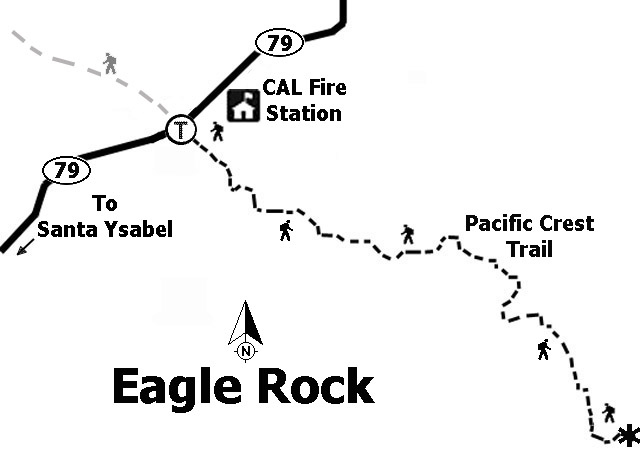 This is a lovely opportunity to hike a little over a 3-mile segment of the Pacific Crest Trail, named a National Scenic Trail by Congress in 1968. If you're feeling exceptionally ambitious, the full trail stretches 2,627 miles from Mexico to the Canadian border.

From the trailhead, follow the well-marked signs south and east up Canada Verde Creek as it passes through open oak woodland with huge old coast live oaks. The creek runs strong after rains and is lined with dense riparian vegetation. The trail follows the creek, but it is largely out of the creek.

After about 1.25 miles, the trail leaves the oak woodland and begins a gradual climb up a hillside sparsely covered with chaparral. After 2.0 miles, the trail goes over a gentle rise and crosses open grassland with much evidence of cattle. Here in this open rangeland are sporadic occurrences of annual wildflowers along with the non-native grasses.

At about 3.4 miles from the start, an outcropping of boulders on the hill up ahead will become visible. Here there is a fork in the trail with the Pacific Crest Trail going to the right. Take the spur trail to the left or east that heads for the rocky outcrop and circles around it. Eagle Rock is among these rocks. For a breath-taking view, walk around the backside of the outcrop, about 30 to 40 feet beyond the formation, before turning around to view the eagle. From this vantage point there is no doubt why it is named Eagle Rock. After viewing the eagle and having lunch or a snack, return to your vehicle via the same route.

Before you go, check to ensure the trail is open. More detailed information about plants, wildlife, history, and geology of the area can be found at Cleveland National Forest.

The trail to the Eagle Rock formation passes by huge old live oaks and what may be San Diego’s oldest and largest sugar bush. Notice that some of the oaks are marked as bee trees.

Look for the old, large sugar bush ( Rhus ovata ). It is more a tree than a shrub. The sugar bush generally is an evergreen shrub or small tree, found on dry slopes and foothills. Leaves are broad, leathery, and folded along the midrib with smooth edges. The fruit is a red sticky drupe that is gathered June through August by Kumeyaay and eaten fresh, cooked, or dried and then ground into a flour for mush. It was also made into a lemonade-like drink. As a tea, the leaves were believed to have a variety of medicinal properties.

Also, there are stunning displays of annual wildflowers, especially between March to May. In an exceptional year on the west side of the San Ysidro Mountains, the biggest display will come a little later than on the hotter, dryer east side. You may see baby blue eyes, owl’s clover, cream cups, ground pink, wine cup, and everyone's favorite California poppy.