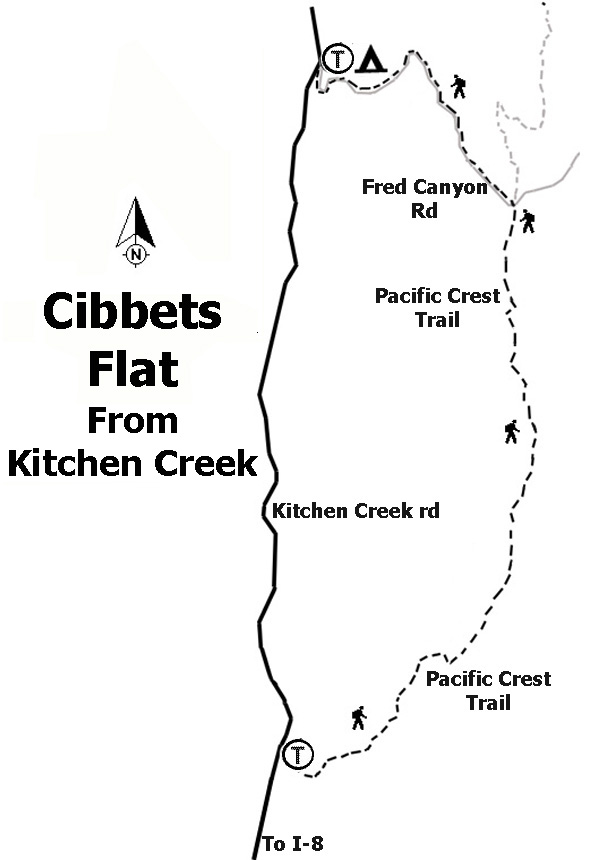 This trek is along a portion of the Pacific Crest Trail beginning at the junction with Kitchen Creek Road. It’s a relatively straightforward trail giving you plenty of opportunity to enjoy the route.

It starts on a ridge line with expansive views of backcountry and south toward Mexico and Cameron Valley as one ascends up the gentle to moderate slope composed of interesting rock formations that will delight geology enthusiasts. Foliated red-stained gneiss makes a nice contrast to seasonal blooming forget-me-nots. The trail levels out and then drops into Fred Canyon with mixed chaparral lined with chamise, mountain bluecurls, manzanita, and an occasional desert four o’clock. The creek in Fred Canyon is usually dry but there is a glade of oaks. From the creek the trail ascends to a clearing where the Fred Canyon road crosses. Follow the road to the west 0.8 mile to Cibbets Flat Campground.

The reward on the trip comes at Cibbets Flat where Kitchen Creek tumbles over granitic rock and ponds among the cottonwoods and willows. This is a great place to stop and have a bite to eat and relax in this shady spot and maybe soak your feet in a cool pond. There are also vault toilets, tables, and water at the campground. After enjoying your respite at Cibbets Flat, reverse direction to return to your vehicle—or maybe you’ve made a reservation at the campground and are settling in. Either way, enjoy.

We’ve rated the difficulty for this hike moderate, with an elevation gain up to 1,400 feet. Dogs are allowed on the trail. Before you go, check to ensure the trail is open. More detailed information about the area can be found at Cleveland National Forest – Descanso Ranger District.

There is so much to enjoy here. Although this hike is best in the spring when the mountain bluecurls, foothill penstemon, and wild peony are in bloom, it is also beautiful on clear days with mid-high temperatures when butterflies, such as pale swallowtail, marine blue or striped blue, and sulfurs are out. Bring plenty of water on such days.

Both Eastwood’s manzanita (Arctostaphylos grandulosa subsp. grandulosa) and big-berry manzanita (Arctostaphylos glauca), found here, are well suited for southern California’s climate that ranges from just under zero degrees Fahrenheit to hot Santa Ana conditions. These dense evergreen shrubs are easily identified with their bright red bark and large berries. They need little water, tolerate salty soil, and grow well in direct sun. Both tolerate wildfires, if they aren’t too frequent, but they have rather different mechanisms for coping with fire. Eastwood’s manzanita is a stump-sprouter. It has a thick burl at its base called a lignotuber that is a protected woody swelling of the root crown/basal burl at or below the surface. The lignotuber contains buds and food reserves that allows the plant to grow new stems during a period when it is unable to photosynthesize if the plant structures above the ground are destroyed by fire. Examples of other stump-sprouters include mountain-mahogany, chamise, and ceanothus. In contrast, big-berry manzanita has no burl and most often is totally killed by fire. However, this species produces an abundance of fire-resistant seeds, which remain dormant in the soil and are stimulated to germinate and grow by fire.

Deer browse manzanitas extensively, while birds, coyotes, foxes, raccoons, and small mammals also are attracted to the berries that look like small apples. In fact, the Spanish name translates as “little apples.” Grizzly bears, once common in chaparral but now extinct, were fond of manzanita berries. The genus name Arctostaphylos is derived from the Greek words for bear, arkto, and grapes, staphyle.

California black bears (Ursus americanus californiensis) also consume manzanita berries. Although bear sightings in San Diego County are very infrequent, they are increasing as black bears extend their range south from the San Bernardino Mountains. The California black bear can weigh up to 200 pounds but is the smallest of bears found in North America. They are omnivores and manzanita berries are a major component of the fall diet.

This trail cuts through the habitat of California’s largest known remaining population of the gray vireo (Vireo vicinior). From late March to early September listen for its song, a deliberate succession of monotonous burry phrases, often repeated in a cycle of four. Nesting in the dense chaparral, the plain gray birds are often difficult to see, though singing males may perch conspicuously atop shrubs. The dwindling population suffers from heavy predation of its nests by the western scrub-jay, as well as parasitism by the brown-headed cowbird.

From I-8 go north on Kitchen Creek Road for 2.4 miles, and look for the signs of the Pacific Crest Trail on both sides of the road. Turn left into the pullout and park. The trailhead is across the road.
Trailhead GPS: N32.74719, W116.45128