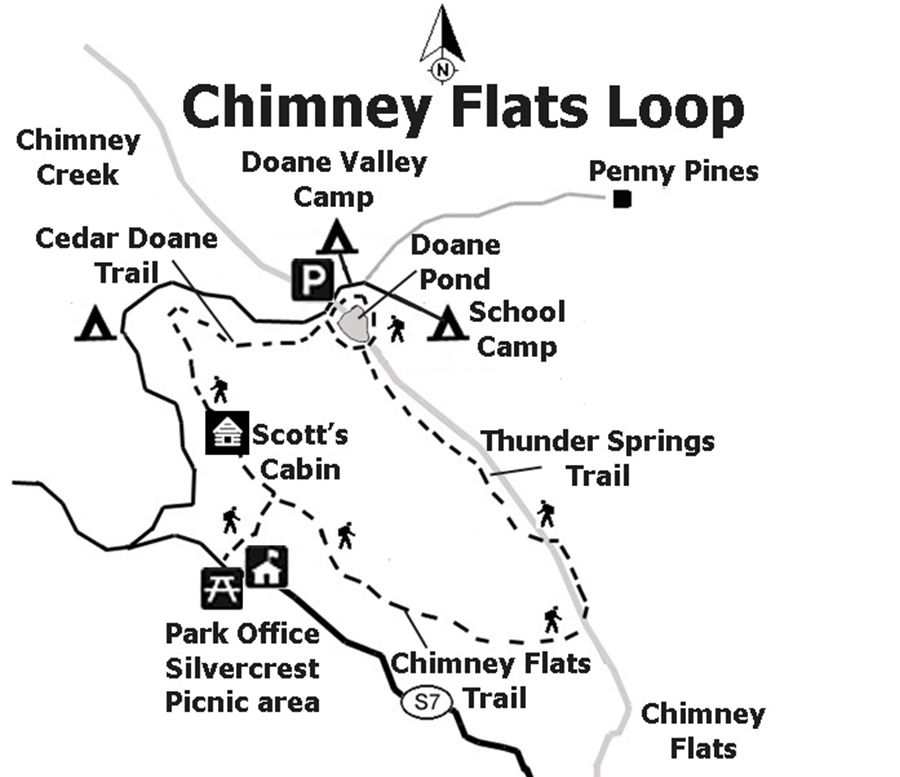 With stunning vistas, old growth cedars, and oak trees that might make you feel as if you were magically transported into the middle of a northwest forest, there’s no other way to put it: Palomar is beautiful. Thanks to the efforts of volunteer organizations such as Friends of Palomar Mountain and the Palomar Mountain Trail Maintenance Unit, plus the dedicated state park rangers, the park has well-maintained trails, restrooms, and camping facilities. Whether you visit on a warm, sunny day or on a misty, overcast one, gorgeous views will abound.

A recommended route with great views is the steep Cedar Trail past Doane Pond up to the Silvercrest picnic area along the Scott’s Cabin Trail, and then along the Chimney Flats Trail until it loops back to Doane Pond via the Thunder Spring Trail. The parking area near Doane Pond offers access to Cedar Trail once past the facilities and over the small bridge next to the pond’s edge. The trail is steep, so come prepared with good footwear and trekking poles if you use them.

Follow the Scott’s Cabin Trail to the cabin site. Just past the site is a spur trail that leads to Silvercrest and park headquarters where picnic tables are available for a short break. Return to Scott’s Cabin Trail and continue along the trail, which becomes Chimney Flats Trail as it curves back toward Doane Pond. At the intersection with Upper Doane Valley Trail, go left on Thunder Spring Trail to close the loop at Doane Pond.

We’ve rated the difficulty for this hike moderate, with approximately 900 ft of elevation gain. Before you go, check to ensure the trail is open. More detailed information about the area can be found at Palomar Mountain State Park.

Watch out for western poison-oak, which in October is surprisingly beautiful with brilliant red color that glows with light shining through the leaves. The contrast of red against yellow ferns, the green of the cedar, yellow of California black oak, and the grey-greens of lichen and moss on the tree trunks create a perfect fall palette. New healthy growth or, in the winter, leafless twigs ring the base of old, fire-scarred tree trunks and line portions of the Cedar Trail. Early morning provides the best opportunity for viewing deer and non-native turkeys making their way through the forest.

Predators that are there but are less likely to be seen include the mountain lion, bobcat, coyote, and gray fox (Urocyon cinereoargenteus). The gray fox is considered the most primitive of the living canids. Because it has hooked claws, it has the ability, unusual among canids, to climb trees, by which it avoids other predators. The gray fox is grizzled-gray on top, reddish on the sides, and has a bushy tail that is one-third of its body length with a dark stripe and tip. The vixen or female gray fox may use a hollow tree for a den. The gray fox is active primarily at night.

One of the highlights of this hike is Chimney Creek with its small waterfall and the thick growth of western azaleas (Rhododendron occidentale) found here. Hike in May and June to see and smell them in bloom. It is one of the most fragrant of azalea species with a sweet and spicy clove scent. It is also only one of two native species of rhododendron found on the west coast of North America.

On cold winter days, ladybug or ladybird beetles (family Coccinellidae with over 5,000 species) sometimes can be found in great numbers in the deergrass (bunchgrass) or other low foliage. Despite being referred to as ladybugs, they are true beetles with parallel hard wing covers creating a centerline down their back and chewing mouthparts. The “lady” for whom European farmers named them is the Virgin Mary, supposedly in gratitude because these beetles consume insects that damage or eat crops. This lady can also be foul-smelling. When threatened, this beetle secrets a fluid from the knee joints that is both toxic and rank smelling to repulse potential predators. It also leaves a yellow stain on leaf surfaces. This lady is also not very nice. If hungry, it will cannibalize its own siblings or larvae to survive.