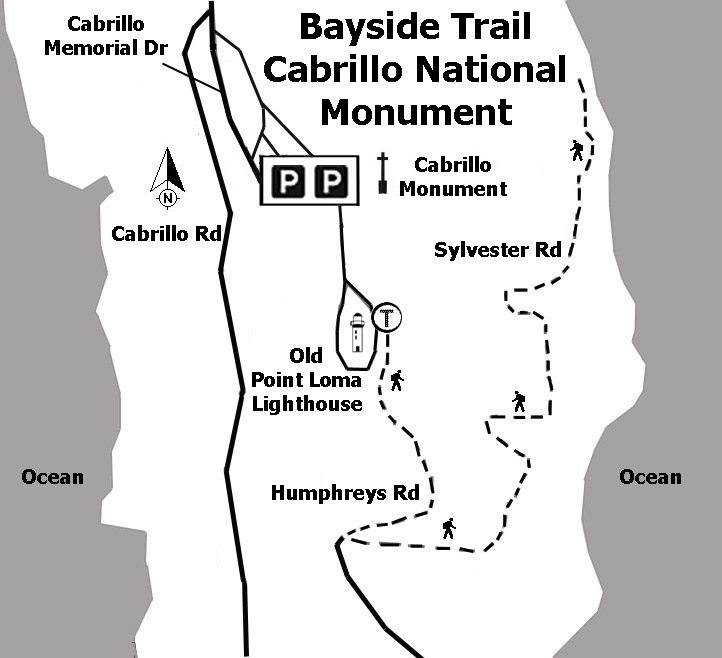 The view from the Bayside Trail at Cabrillo National Monument is stunningly beautiful. Visible from this trail are downtown San Diego, Coronado, San Diego Bay, and the Pacific Ocean. Whether you are visiting San Diego for the first time or are a life-long San Diegan who has never made it all the way down Point Loma, this trail is a wonderful way to learn a little bit about the nature and history of the area and to see it all from a lovely vantage point. It is also one of four National Recreation Trails in San Diego County. Although the trail is a scant 1.86 miles round trip, don’t be fooled by the length. It is still a good workout as the hike back up the trail is all uphill with a 340-foot elevation gain. There are interpretive signs along the trail identifying many of the common plants that may be seen on the hike. The signs also highlight the natural history and military importance of Point Loma and San Diego Bay

Before you go, check to ensure the trail is open. Visit the National Park Service/Cabrillo National Monument website to learn more.

The Bayside Trail is a perfect way to get acquainted with the coastal sage scrub ecosystem. This special habitat is becoming increasingly rare due to development in southern California. On this trail, however, one can experience the plants and animals that call the sage scrub habitat home. Black sage, California encelia, coastal sagebrush, laurel sumac, and lemonadeberry are some of the common plants that are encountered. The best time to view wildflowers in this coastal sage scrub community is February through May but the views are year-round.

Point Loma is an important avian stopover on the Pacific Flyway. This means that during the spring and fall migration there are lots of bird species that may be viewed, many of which do not make their home in San Diego during the rest of the year. Be sure to bring your binoculars. Binoculars are also helpful when viewing the marine birds just offshore and the occasional sea lion that swims up to the fishing boats below.

The kelp forests visible just off of Point Loma are home to abalone, though their populations are much lower than historic numbers. Abalones face the plight of many marine species either currently or once prized for commercial fishing—slow growing with a high mortality of young. Reproductive success is contingent on having high population densities. This is especially important to a relatively sessile creature like the abalone that spawns by releasing gametes into the open water. Recent genetic techniques on the adult pink abalone (Haliotis corrugata) in the Point Loma kelp forest show that the population is below the threshold size needed for long-term viability and density must increase in order for this population to persist.

For history buffs, the Bayside Trail winds past several military bunkers that were part of the defense system used to protect the San Diego Bay during World Wars I and II. Point Loma is still important to the military and the entrance to the monument is on land belonging to the Department of the Navy. Pay attention to the time while on the trail. The trail closes at 4 p.m. and the exit gate through the military base closes at 5 p.m. Leave time to explore the visitor center to learn about Juan Rodríguez Cabrillo who discovered San Diego Bay in 1542. For years it was believed that Cabrillo was Portuguese, but recent evidence proves that he was born in Spain. A replica of his ship the San Salvador was built by volunteers of the Maritime Museum of San Diego and is now one of their exhibits.