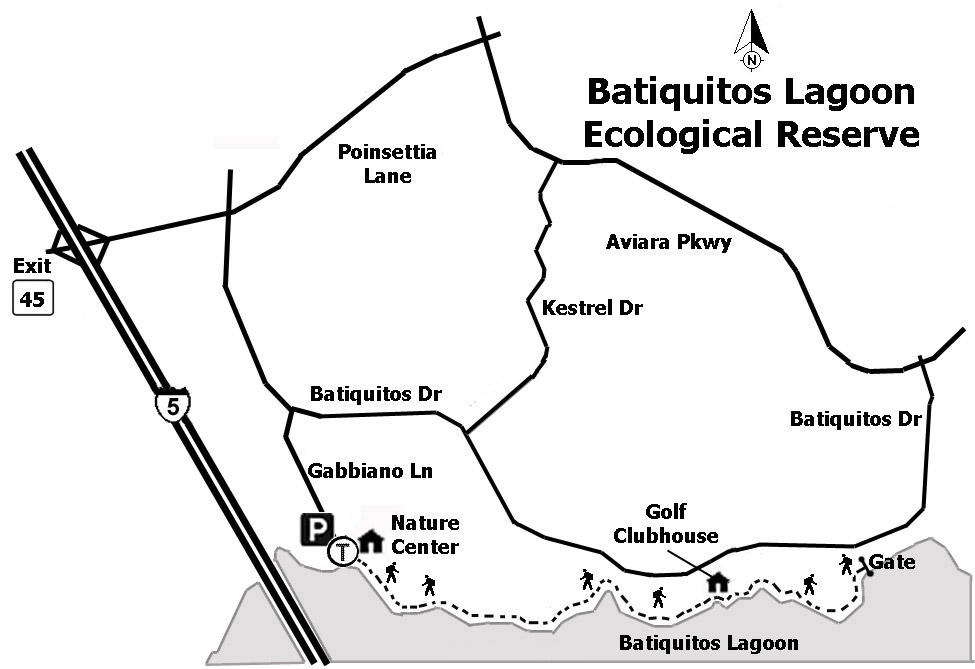 Batiquitos Lagoon is a 600-acre ecological reserve managed by the California Department of Fish and Wildlife and supported by the Batiquitos Lagoon Foundation (BLF). It has a drainage basin of 55,000 acres with inflow from San Marcos Creek and Encinitas Creek with I-15 the eastern border of the San Marcos Creek watershed. It was designated an ecological reserve in 1983 to protect coastal wetland habitat and species. Although Batiquitos appears as a Spanish name, it's more likely based on a Native American term for a “little watering hole,” which is what it was considered by early native people who followed the tidal surges in order to gather shellfish and edible plants.

The trail hugs the shoreline on the north side of the lagoon. Heading east on the trail, freeway noise subsides, and you can enjoy the view of the undeveloped south side of the lagoon. Looking west, you can see how I-5 and the railroad tracks have narrowed the lagoon’s outlet to the ocean. Dredging is necessary to clear sand and silt so that Batiquitos does not become stagnant and can remain a lagoon flushed by the tides. In the early 20th century, the lagoon became plugged from urban and agricultural activity upstream that carried soil down to the mouth of the lagoon, blocking the connection to the ocean and creating stagnant pools. The lagoon was dredged from 1994 to 1997 to open it once again to the daily flushing necessary to keep it a healthy estuary.

Before you go, check to ensure the trail is open. More detailed information about plants, wildlife, history, and geology of the area can be found at www.batiquitosfoundation.org.

Cattails and California cord grass (Spartina foliosa) at the water’s edge are examples of halophytes that survive fluctuating salty and fresh water. Cord grass grows in clumps on the tidal mudflats. This perennial has strong creeping rootstocks, is thick at the base, and has long, tough blades. A thick growth of tall cord grass provides cover for foraging birds on the mudflats that are in search of invertebrates to eat. These invertebrates can tolerate the changes in water level, salinity, and temperature. They include various species of worms, clams, snails, and shrimp.

Bulrushes, spiny rush, and sedges are found between the trail and the water. Pickleweed and salt grass are abundant in salty soil. In spring, alkali heath, salty susan, seaside heliotrope, and salt marsh fleabane provide some color.

Along the slopes, look for Mojave yucca and prickly-pear. Succulent chalk dudleya (Dudleya pulverulenta) grows sideways on the sandstone with its wide rosette covered in a chalky wax, which helps the plant avoid desiccation by reflecting the sunlight. Sharp-spined California desert thorn (Lycium californicum) spills over a rock just past the first turn in the trail. It is a tall entangled shrub that is commonly found on ocean bluffs and on borders of estuaries that has small white to pale purplish bell-shaped flowers. Both chalk dudleya and California desert thorn are on a watch list by the California Native Plant Society because of their limited distribution.

About halfway along the trail, a small freshwater creek is home to arroyo willow, mule-fat, and non-native palms. In the sandstone and clay banks, from time to time, layers of shell fragments are visible. These are middens, the trash heaps left by the native people who inhabited the area around the lagoon centuries ago. The middens show the extent of their harvesting activity. Archaeologists have determined that native people harvested shellfish here for 9000 years! Batiquitos hosts over 180 species of birds. Redwing blackbirds sing from the cattails, and egrets and great blue herons dot the shore. In winter, migratory shorebirds can be spotted on the mudflats along with ducks, coots, pelicans, gulls, and terns. Ospreys, or fish hawks, cruise over the water, and fall and winter songbirds like yellow-rumped warblers flit through the trees.

At a point where a steep slope heads up to a small parking lot, about 1.5 miles out, is a good place to turn and retrace your steps, although the trail continues almost to El Camino Real. More detailed information about plants, wildlife, history, and geology of the area can be found at www.batiquitosfoundation.org. Docents lead nature walks when the visitor center is open. A native plant garden is at the visitor center along with brochures for self-guided walks.