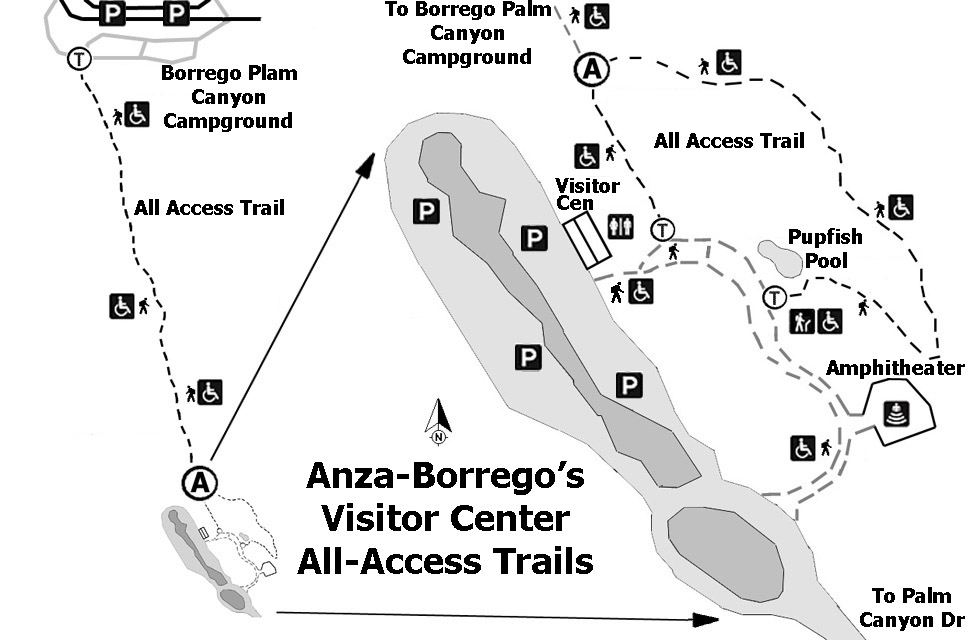 Anza-Borrego Desert State Park offers something for everyone at the park’s Visitor Center, including two trails that are ADA-approved.

The longer 0.7-mile trail (1.4 miles out-and-back) leads north from the Visitor Center to the Anza-Borrego Desert State Park campground area, ending just west of campsite No. 71, where a drinking fountain is found. The trail is paved and offers 10 interpretive signs with illustrations that have been set at an angle to make it convenient for people at different heights to read the information. Beneath the interpretive illustrations and descriptions on the panel are similar descriptions written in braille. Visitors are encouraged to use all their senses to experience the desert surroundings, though care should be taken not to touch the cactus! The Visitor Center campground trail also offers sitting areas near the interpretive signs where one can contemplate the desert scenery.

This accessible trail makes an excellent introductory trail for first-time visitors. There is a cautionary sign there that all visitors should follow: carry water and a map, wear light clothing, a hat, and sunglasses, use sunscreen and a lip balm, and let someone know what trails you will be on and when you intend to return. Call your contact when you complete your hike to let them know that you have safely returned, avoiding an unnecessary search. Another recommendation is to carry a comb and tweezers to remove any spines that might attach to your clothing or skin if you brush against a cactus.

We’ve rated the difficulty of this hike easy, with minimal elevation gain. Before you go, check the weather and check to ensure the trail is open. There is a $10 Day Use Parking Fee per vehicle at the time this is written. More detailed information about the area can be found at Anza-Borrego Desert State Park.

The interpretive signs describe common desert shrubs, reptiles, insects and spiders, and large and small birds and mammals you might see. One sign describes the many common cacti found in this region. Shrubs that surround the trail are typical of desert scrub and include the creosote bush, white bur-sage or burrobush, ocotillo, various cholla, brittlebush, and indigo bush.

You are likely to see a desert cottontail (Sylvilagus audubonii) or a black-tailed jackrabbit (Lepus californicus) scurrying around the many plants. The two differ in many ways. Cottontails are rabbits and are born blind and naked in a burrow and are totally dependent on their mother for several weeks. Jackrabbits are hares and are born fully furred, eyes open, and ready to run. Jackrabbits do not dig burrows. They separate their young and hide them under shrubs. A jackrabbit is larger, as are its ears, which are half the length of its body. It is called a jackrabbit because its long ears are similar to those of a donkey. The large ears help the jackrabbit regulate its body temperature as well as hear predators. The long legs give it speed and the ability to jump over shrubs. Jackrabbits have been observed running directly toward a cactus while being pursued, then clearing it at the last moment, leaving the pursuing prey headed for an unwelcomed target.

Keep alert for birds that you might see scurrying around bushes. They might be one of the two species of quail that are known to inhabit the Borrego Valley. There are subtle distinctions between the two. Gambel's quail (Callipepla gambelii) is the typical desert species with a redder head than the bluer-headed California quail (Callipepla californica), which has spread east into desert areas. The California quail has a much more distinct scale pattern on its chest compared to Gambel’s. Unlike the California quail, Gambel’s quail has a cream-colored belly, with the male having a black patch on its belly. Typical of quail, both prefer to walk rather than fly. If you do see a covey of quail, look for a lone male standing on a high point keeping a lookout for danger.

A perfect way to end the hike is to visit the interior of the Visitor Center where there are more interpretive signs, films, and volunteer staff that are ready to answer questions about this desert area.

If you happen to be staying overnight in the area, be sure and look at the stars and planets. Borrego Springs is one of the few dark sky communities in the United States and one of the best places for night sky viewing. If you walk the trail at night, bring a UV light (or blacklight) and you might see some scorpions glow.

Looking for a hike that’s short but sweet? There’s a shorter 0.25-mile trail that also begins in front of the Visitor Center entrance. This loop trail is on compact dirt and is wheelchair accessible. It offers a greater variety of desert plants, many of which were planted around the Visitor Center for the enjoyment and education of visitors, and are described through interpretive signage.

You’ll also see a pupfish pond next to the tall native California fan palms. The desert pupfish (Cyprinodon macularius), listed as endangered by the US Fish and Wildlife Service, is able to withstand extreme temperatures and can also tolerate extreme salinity—over three times that of saltwater—and low oxygen content. No more than three inches in length, the bluish-colored males are very territorial. Females are silvery or tan in color and slightly smaller. The desert pupfish is a very old fish, sometimes referred to as a “living fossil.” About 10,000 years ago, there were prehistoric Pleistocene lakes in the desert that were interconnected. As the lakes evaporated and the pupfish genus became isolated, they evolved into the 13 living species known today.

The loop joins a portion of the longer trail before it returns to the main path, leading to the entrance of the Visitor Center.

Know before you go: There is a $10 Day Use Parking Fee per vehicle.