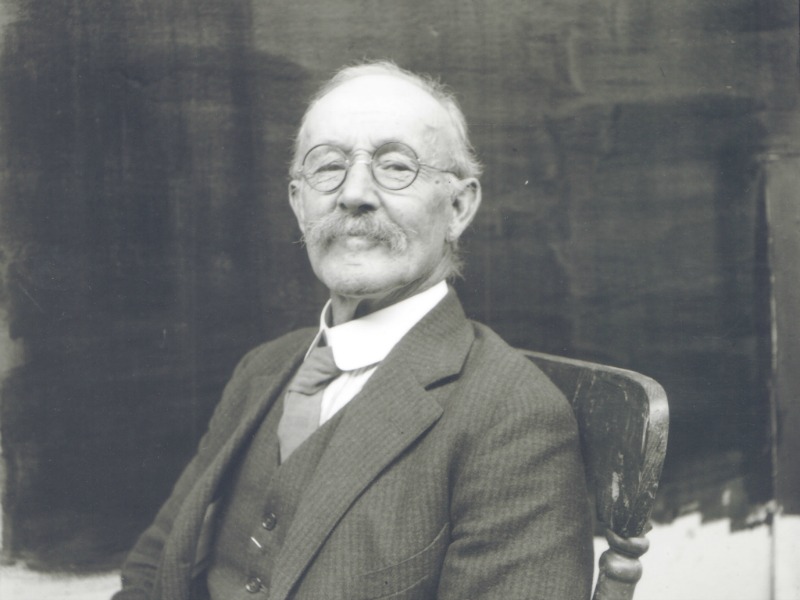 Charles H. Sternberg was a pioneer fossil hunter, avocational paleontologist and patriarch of a dynasty of American fossil hunters. His three sons continued the tradition; together the Sternbergs collected a huge number of specimens for scientific study and for display in museums throughout the United States, Canada and Europe. In the last decades of Sternberg’s career, he and his wife Anna lived in southern California. His association with the San Diego Natural History Museum began around 1920. He was given the honorary title of Curator of Vertebrate Paleontology, as well as office and laboratory space at the museum.

Sternberg’s early years were spent in the valley of the Susquehanna River, Otsego County New York, where he explored the countryside and nurtured an interest in fossil plants and shells.  His father Levi, a minister, scholar and educator, moved the family to Iowa when Charles was 15. At the age of 17, he and his twin brother Edward joined his older brother George M. Sternberg at his ranch in Ellsworth County, Kansas.  At this early age, Sternberg declared his intention to become a professional fossil hunter.  His cattle-herding duties on the ranch provided opportunities for exploration and collecting, beginning with fossil plants from the sandstone of the Dakota Formation in central Kansas. He began sending his finds to the Smithsonian Institution and in 1872 met famed paleobotanist Charles Léo Lesquereux (1806 - 1889) who was impressed by Sternberg’s discoveries and encouraged his work.

In 1875 Sternberg enrolled at Kansas State University, Manhattan, where he studied under Professor Benjamin Mudge.  Mudge organized a fossil-collecting trip in 1876 to collect for famous Yale paleontologist Othniel Marsh (1831-1899) but Sternberg was too late to join.  Greatly disappointed, he wrote to Marsh’s academic rival, Philadelphia paleontologist Edward Drinker Cope (1840-1897), asking for sponsorship for a collecting expedition to the chalk of western Kansas. Cope sent $300 to pay for a team of ponies, wagon, camp outfit and to hire a cook and driver, and Sternberg’s professional fossil-hunting career was launched. Sternberg worked for Cope for the next four years and for several more field seasons before Cope’s death in 1897.  He and Cope explored the Judith River Basin in central Montana; this was Sternberg’s first exposure to large dinosaur fossils.

Sternberg was typical of early fossil hunters, enduring the most extreme conditions, collecting in remote locations, drinking alkali water, living on beans, hardtack and wild berries.  There was a constant risk of illness, injury and death.  Cyclones and severe storms plagued the Kansas plains amid extremes of heat and cold.  In the last decades of the 19th century there was often threat of Indian attack.

Fossil hunters like Sternberg had to possess engineering skills to excavate, plaster-jacket, handle and transport large masses of material over road-less terrain to the nearest railhead for shipping to their final destinations.  Methods and techniques for excavating and preserving fossils for transport often had to be improvised by experimenting with the materials at hand.  Summers were typically spent in the field; during the cold months, Sternberg cleaned and prepared specimens for sale and spent time organizing his notes, studying and writing. When not under contract to individual paleontologists, museums and institutions, he free-lanced.  In 1909 Sternberg published the first of two autobiographies, The Life of a Fossil Hunter (1909, 1931), followed by Hunting Dinosaurs in the Bad Lands of the Red Deer River, Alberta Canada (1917, 1932).  A biography of the Sternberg family was published in 1991 (rev. ed. 1999) by Katherine Rogers, The Sternberg Fossil Hunters: A Dinosaur Dynasty. 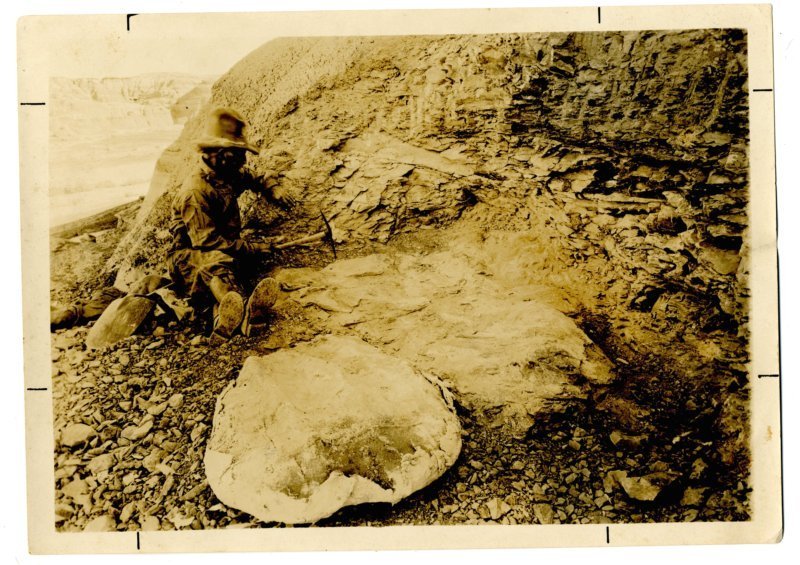 Throughout his long career, Sternberg sold thousands of fossils to finance his field work.  In 1921 the San Diego Natural History Museum purchased a large collection of dinosaur, mosasaur and mammal fossils from Sternberg for the sum of $3,680.  He exchanged duplicate specimens, pieces or casts to complete various fossils.  Examples of fossils collected by Charles H. and his sons, George Fryer Sternberg (1883 – 1969),  Charles Mortram Sternberg (1885 – 1981) and Levi Sternberg (1894 – 1976) are found in museums in a dozen foreign countries and at least 22 states.  Sternberg specimens of reptiles, birds, fish, and mammals include the giant sea tortoise, mammoth, rhinoceros, three-toed horse, great saber-toothed tiger, fin-backed lizard, giant salamander, giant bison and many species of dinosaurs.  In 1913 Sternberg found what he then considered to be his greatest discovery, the complete skin impressions of the crested duck-billed dinosaur Lambeosuarus lambei.This unique specimen is still on display in the dinosaur hall of the American Museum of Natural History in New York.

Sternberg made his home in Lawrence, Kansas, while exploring the Cretaceous chalk beds of western Kansas (Gore County), the Dakota Sandstone of Ellsworth County in central Kansas, the Montana badlands, the Laramie Beds in Converse County, Wyoming, the Permian of Texas, the John Day River and Fossil Lake areas of southern Oregon and, in 1912 – 1917, the rich dinosaur bone fields of the Red Deer River, Alberta, Canada.  In the summers his wife and children would often spend time with him in the field, living in tents and helping with the work.  His sons participated in fossil collection as field assistants and later as expedition leaders. 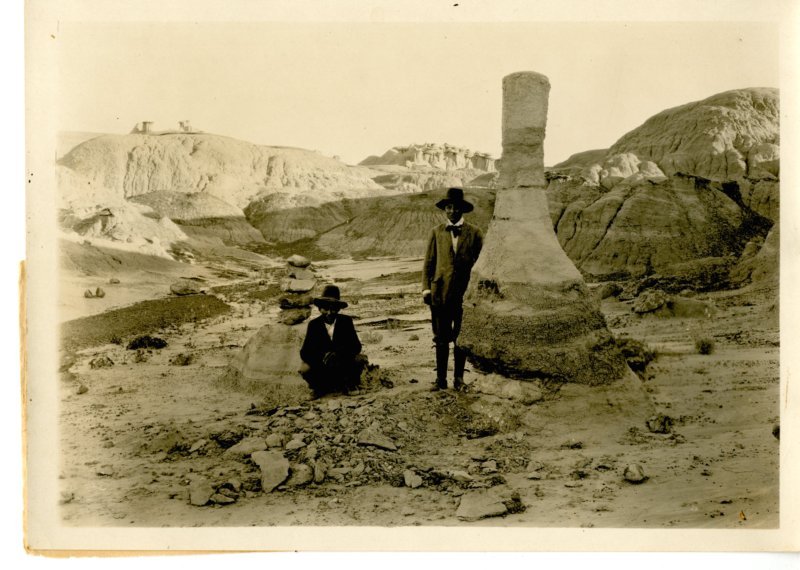 After moving to San Diego in 1921, Sternberg continued fossil-hunting.  He contracted with the University of Sweden, Upsala, working with two Navajo assistants in the Kirtland Shales near Farmington, New Mexico.  He collected throughout Imperial County and coastal San Diego County and in his last years explored the McKittrick Pleistocene fossil beds west of Bakersfield (1925-1927). In 1928 he travelled the Baja Peninsula to look for giant Cretaceous ammonites; this was to be his last field expedition.  Sternberg lived with Anna in southern California until her death in 1938.  He left California in 1939, finally settling with his son Levi in Toronto where he died at the age of 93.

The legacy of Charles H. Sternberg and his sons lives on in museums throughout the world, and also at the Sternberg Museum of Natural History in Hays, Kansas, which houses over three million items in the Sternberg collections alone.  Scientists have honored the Sternbergs by naming more than 25 species for Charles H. and his sons, including plants, mollusks, fishes, reptiles, dinosaurs and mammals.