The California sea lion occurs from British Columbia to Mazatlan, Mexico, breeding from San Miguel island off the coast of California in the north to Mazatlan in the south.

Sea lions primarily stay close to land, leading many to "haul out" in rather dense urban areas, such as San Francisco's Pier 39. Because of their proximity to humans, and their common occurrence in zoos, aquariums, and circuses, sea lions have endeared themselves to many. 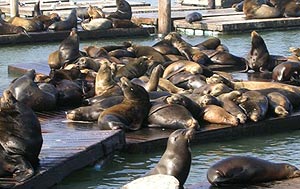 On the other hand, sea lions are infamous among fisherman for their boldness and persistence. Thought of as the "most troublesome animals with which to contend" they are blamed by fishing communities for "measurable economic losses" because of their willingness to destroy fishing nets and eat captured fish. Many conservationists contend that they eat commercially "valueless" fish and cephalopods such as rockfish, anchovies, and whiting, thus benefiting the fishing industry.

The exploitation and conservation of California sea lions has been an issue since before European contact was made. Used by the Concaac Indians of Sonora for food, it was not until Spanish hunters searching for otter pelts began to use sea lion blubber for oil that full scale exploitation began to take place. With increasing numbers of sea lions taken from the 1810s to the early twentieth century, the population decreased throughout California and Mexico, until California law extended protection in 1909. At this time, the price of sea lion oil and pelts fell so much that the exploitation of the animals ceased in the region. By the 1930s, most commercial exploitation of the animals had ceased, with only a few instances of commercial fisherman hunting the sea lions as retribution for lost fish. 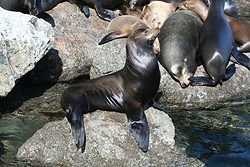 In recent days, conservation efforts have allowed sea lions to grow to numbers previously unseen. Not until the late 1920s were periodic censuses taken of the mammals, showing their California population to be between five and ten thousand, a number which stood until the 1960s. At the time of the "sea lion slaughter" Clinton Abbott stated that there were more than 7,000 individuals off the coast of Southern California with many more unaccounted for in Mexican waters.

With the passage of the Marine Mammals Protection Act of 1972, their number has increased to more than 160,000 at this time.