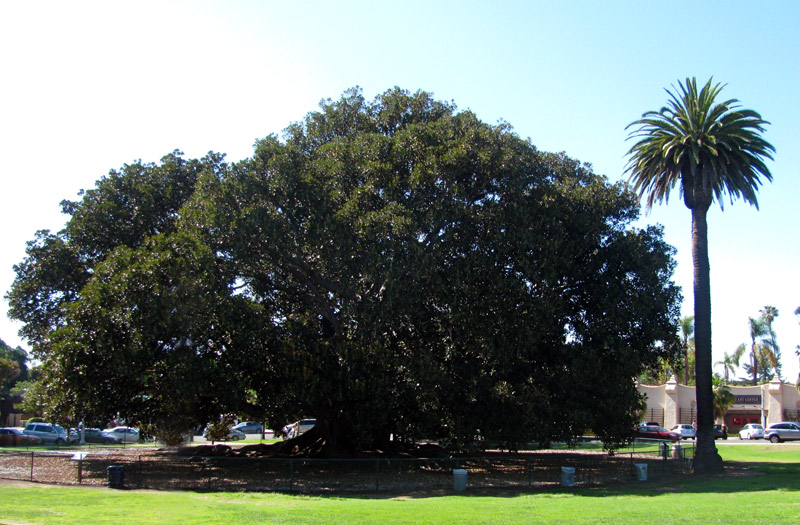 The remarkable large tree to the north of the museum is a Moreton Bay Fig tree, which—like most of the other large trees in the Prado area of Balboa Park—was planted in preparation for the 1915 exposition. The 1914 planting list for the exposition shows a five-gallon fig tree planted at this location. Since it was a few years old at the time it was planted, its age should probably be computed from about 1910, making it over 100 years old. While many people would like to attribute its planting to Kate Sessions, San Diego's pioneer horticulturist and street tree planter, there is no documentation to verify this claim.

This tree is listed in the California Registry of Big Trees as one of the champion trees of the state. According to the registry, in 1996 the tree measured about 78 feet (24 meters) high, with a crown width of 123 feet (37 m) and a trunk girth of 486 inches (12.3 m). It shares the title for this species with the famous Moreton Bay Fig tree of Santa Barbara, California, which has a broader canopy but is not as high.

Many people who grew up in San Diego remember climbing around the roots of this tree as children, while their families enjoyed picnics in the cool shade. Unfortunately, heavy foot traffic caused soil compaction and damage to the delicate surface-feeding roots of the tree, preventing it from obtaining nutrients and water, and the tree began to decline. It was trimmed and fenced off in 1989, mulch was allowed to accumulate, and the tree has recovered and once again shows thick, glossy foliage. As it has recovered it has begun to show the aerial roots that are characteristic of fig trees. In the wild, these roots would have been growing since the early youth of the tree, and would have reached the ground and developed into stout, woody props to help support the heavy branches.

The small dry fruits of the Moreton Bay Fig—like those of other figs—are actually composed of hundreds of tiny flowers completely enclosed within the inverted fleshy tissue of the receptacle upon which they rest. A tiny hole (called an ostiole) in the tip of the fruit allows minute symbiotic wasps, which pollinate and lay their eggs within the flowers, to enter and leave the structure.

Ficus macrophylla is a native of east Australia. When it is grown in an open area where it can spread, the Moreton Bay Fig may become as much as 150 feet wide; but crowded in its natural forest habitat—or near buildings in an urban setting—it tends to grow tall and narrow. Several other specimens of this species, as well as 32 other kinds of fig trees, are planted in Balboa Park.

References:Wayne Armstrong, "The Calimyrna Fig and its Pollinator Wasp."Reid Moran: "Trees Around the Museum." Occasional Papers of the San Diego Society of Natural History no. 11. 1961. Kathy Puplava and Paul Sirois: Trees and Gardens of Balboa Park. City of San Diego Park and Recreation Department. 2001.

Ever notice the spectacular tree outside the Museum’s north entrance? Of course you have! It’s the iconic Moreton Bay Fig tree, which—like most of the other large trees in the Prado area of Balboa Park—was planted in preparation for the 1915 Panama-California Exposition. Learn more about this fabulous Balboa Park icon on our website here: http://bit.ly/1OeOda5.