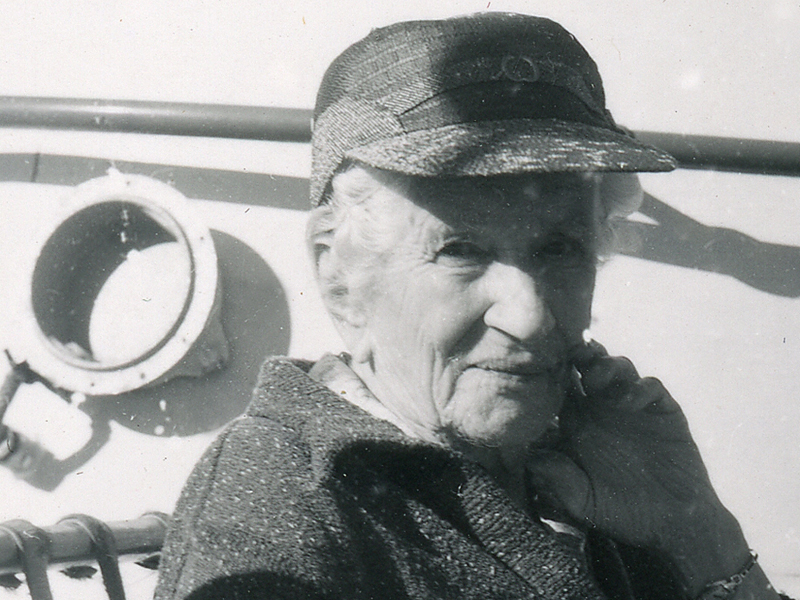 On a day in 1900 when the thermometer registered eight below zero, Ethel Bailey and her father left their home in Maine. A year earlier they had vacationed in California and decided to make it their permanent residence. The Baileys settled at a crossroads near the village of Hollywood. Mr. Bailey shrewdly bought property with an artesian well. He was later able to retire on the profits from selling this land. When Ethel Bailey Higgins reminisced about the unspoiled countryside around her first California home, she recalled horse and buggy rides with her father. They explored Alhambra, the wilderness of the San Fernando Valley, the barren foot of Griffith Peak and the country road called Western Avenue, now a major four-lane street running through Los Angeles. Entranced by the flora of her new home, Higgins wrote that though she was “always a flower lover” in her native New England, she was “almost overcome at the prodigality of the new and strange flowers of California.” Ethel Bailey was born in 1866 in Vassalboro, Maine. Through her father, her lineage traced back to some of the earliest Quaker settlers and entrepreneurs in the Americas. Little is known of her mother except that her Presbyterian faith cost Mr. Bailey his place in the Quaker congregation. At age 20, Ethel Bailey was the youngest graduate of a local college, the Kents Hill School, founded as Maine Wesleyan Seminary. For two years before moving west, she taught high school in Massachusetts. In California she turned to photography as a career, first working in the studio of Frank Schmacher before opening her own studio in Hollywood. She began making “plant portraits,” and hand-tinting them, developing a portfolio of 250 pictures of native flowers. She ran a small business selling these works. Enlarged copies of these plant photographs were exhibited at San Diego’s 1914-15 Panama-California Exposition in Balboa Park.

In Los Angeles, Ethel Bailey met and married John C. Higgins, an inventor and machinist. They briefly lived in El Centro in the Imperial Valley, but in 1915, moved to San Diego and invested more than $40,000 in a foundry and machine shop. When the stock market crash of 1929 ushered in the Great Depression, the family business and investment were lost. Discouraged and ill, John Higgins died in 1931.

After Ethel Bailey Higgins liquidated assets and paid off all the family debts, she faced widowhood with 14 cents to her name. At 67 years of age, she was alone in the world and in need of a livelihood. Perhaps calling on the steadfastness of her Quaker heritage, Higgins successfully combined her photography skills and plant studies to forge a new life and to launch a long scientific career.

She always had an interest in botany, and over the years intensified her studies in order to identify the flowers she photographed, sometimes asking for expert assistance. Her archived correspondence has reply letters from botanists at the University of California, the New York Botanical Garden, and the Smithsonian Institution. A Stanford University botanist acknowledged receipt of plant specimens and the “beautiful photographs” sent by Higgins and expressed interest in purchasing additional pictures from her native plant portfolio.

“While my interest in cacti is chiefly from the standpoint of making their portraits . . . I have to know something of them and I am trying to learn all I can . . . ,” she wrote to botanists at the Smithsonian in 1929. Her photography and botanical research culminated in the small but popular illustrated book, Our Native Cacti issued by a New York publisher in 1931. This work undoubtedly brought her to the attention of the San Diego Society of Natural History. Although it cannot be said that the book directly led to her new job, Ethel Bailey Higgins was named curator of botany at the San Diego Natural History Museum in 1933 (some accounts give the date as 1934).

It was late in life for a new start, but Higgins had begun what would become an almost 30-year career at the Natural History Museum. During her years in the botany department as curator and assistant curator, the size of the herbarium grew from 6,000 specimens to a collection of 46,000. She conducted a professional correspondence and specimen trades with other museum botanists. She is believed to have initiated the first accession records for the plant collections. Her brown spiral notebooks of numbered specimen lists still exist. All accession records are today kept on a computerized database. With about 80 percent of the historical records now searchable, Higgins is credited with adding 184 unique items to the herbarium collection from her own plant explorations. From joint collecting trips with museum entomologist Charles F. Harbison, she is associated with an additional 300 accessions.

Higgins offered practical education about plants and was particularly enthusiastic about the native plants of San Diego. Throughout the 1940s and ‘50s, she produced various scientific papers and was a frequent contributor to California Garden. When the Natural History Museum ramped up its public education programs in the 1950s, Higgins met with classes and student groups at the museum and produced wall charts explaining roots, stems, leaves, flowers and fruits. She was authorized by the Museum director to spend time writing an introductory botany text, suitable for grade schools. Lessons About Plants was reproduced by mimeograph in 51 pages with Higgins’ hand-drawn illustrations. It is written in clear simple language and was to be tested at Francis Parker School and developed for wider use. Higgins also wrote an interpretive guide on San Diego desert flowers. This effort grew into the popular Trails series which included other Higgins works such as “Pines and Palms of Balboa Park” and “Chaparral of San Diego County.”

In addition to her educational contributions and her place as one of the early women curators at the Museum, Higgins wins lasting horticultural recognition for seminal botanical works on local flora. Botanists did not have a checklist of San Diego County plants until Ethel Bailey Higgins undertook the important, if tedious, work of compilation represented in her “Annotated Distributional List of the Ferns and Flowering Plants of San Diego County, California,” Occasional Papers of the San Diego Society of Natural History. No. 8, November 1949 and “Type Localities of Vascular Plants in San Diego County, California,” Transactions of the San Diego Society of Natural History, XII, No. 22, pp. 347-406, July 22, 1959. Such lists are more useful if “vouchered,” that is, if an accession number of the herbarium type specimen is included. Higgins explained that when a new species of plant is discovered and named, one specimen is designated the “type specimen.” All later botanical work relating to the plant must, if possible, reference this specimen. Type specimens for San Diego plants may be deposited in a local herbarium, or in another state or country. The location and accession number of the representative herbarium specimen is the “voucher.”

While botanists long recognized the need to update Higgins’ work, it was not until 1986 that R. Mitchel Beauchamp published A Flora of San Diego County, California (National City: Sweetwater River Press) after 15 years of work on the project. The most recent iteration, including new species and revised nomenclature, is by Jon P. Rebman and Michael G. Simpson, Checklist of the Vascular Plants of San Diego County, 4th ed. (San Diego: San Diego Natural History Museum, 2006).

During her years at the Natural History Museum, Ethel Bailey Higgins was something of a favorite with the local press. A tongue-in-cheek article in 1953 reported her complaint that the police beat her to every specimen of marijuana she tried to collect for the herbarium. The San Diego Union and the Tribune wrote about the ways that Higgins “ignored” her age to carry on an active life. When 89 she enrolled in evening German classes because some important botanical works appeared only in that language. She was working a regular 40-hour week when the museum staff surprised her with a 90th birthday luncheon. In that year she bought a loom and took up weaving. When 91 she spent two weeks in Baja, her fifth plant exploring trip to Mexico. At age 93 the Natural History Society published her paper on San Diego native plants and in 1961, when 95, Higgins traveled to her girlhood home in Maine, to be celebrated as the oldest alumna of Kents Hill School. She was honored on the 75th anniversary of her graduation.

The newspaper reported in 1962 that San Diego’s “number one career girl” had asked to retire from the Museum on her 96th birthday. Higgins continued to work for a few days each week, laboring on a history of botanical exploration and plants of Baja California. Although she had conducted extensive research and accumulated a great deal of documentation, this project was not completed when she died on March 9, 1963.

Known as energetic and fearless, the indomitable Ethel Bailey Higgins revealed her secret for a long and productive life as “having a lively curiosity and a sense of humor.” Other qualities advanced her unique contributions to San Diego botanical science. She was a life-long learner able to identify scientifically significant projects and to doggedly persist in the years of labor-intensive work needed to accomplish them.