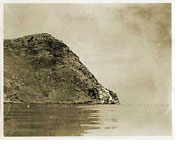 Islas Coronado, Islas de los Coronado, or the Coronado Islands, are a small group of islands—North, Middle and South Coronado, in particular—off the coast of Mexico, just south of the U.S.-Mexico border.

L.M. Huey and Jose M. Gallegos made two trips to the Islands in 1924, accompanied by Ralph Hoffman and Carroll deWilton Scott in April and by A.J. van Rossem in May. Huey returned for a day trip in June 1926 with some other colleagues. You can read Huey's field notes.

Following is an excerpt from the San Diego Union about the April trip:

"The first co-operative work to be undertaken under the new arrangement [with the Mexican goverment] is a reconnaissance of the bird life of the Coronado islands… The group will encamp upon the islands for as long a period as is necessary to complete the preliminary part of their plan.

According to Prof. Gallegos, the Mexican government is contemplating protection for the very interesting colonies of sea birds which make their home upon the Coronado islands… Bird colonies of the Coronados include the brown pelican, Farallon cormorant, Brandt cormorant, Baird cormorant, western gull, Cassin auklet, Xantus murrelet, black petrel, Socorro petrel and perhaps others whose status it is expected to determine upon the present expedition…"

Professor Gallegos apparently did recommend protection for the Coronado birds, and the Mexican government declared the islands to be a bird sanctuary. In addition, a small army garrison was stationed on South Island (Ellsberg, Los Coronados Islands, 1970).

The article also noted that "the Mexican fisheries boat Tecate, which patrols local waters…" was to be made available to the scientists; the boat was used on the May 1924 trip, and also on subsequent trips.

Recent work and more information on the Islands is available at the Herpetofaunal Survey of the Coronado Islands March 2000 (Herpetology Department).

From the Archives: Trips to the Coronado Islands pages created by Eunice Kua, intern at the SDNHM Research Library while a graduate student at the University of Michigan, Ann Arbor.