The Making of an Exhibition

I want people to see things they’ve never seen before and learn things that will leave a lasting impact on them. Very few people in Southern California are aware of the legacy the area has for producing beautiful museum-quality gems.
–Curator Elise Misiorowski 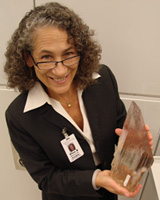 Elise B. Misiorowski , Graduate Gemologist (GG) and an internationally respected jewelry historian, is the curator the All That Glitters exhibition. She previously served as the Museum Director at the Gemological Institute of America (GIA) world headquarters in Carlsbad, California. Elise’s lifetime interest in art history led to her to specialize in jewelry history. She lectures and publishes extensively to both professional and lay audiences, and has mounted numerous exhibits at GIA and at national trade shows.

Come behind the scenes and see the making of an exhibition

The 5000-square-foot exhibition, All That Glitters: The Splendor and Science of Gems and Minerals, with displays of gems, minerals, carvings and jewelry from around the world, is developed and created by the San Diego Natural History Museum’s award-winning exhibitions team under the leadership of curator Elise Misiorowski, GG. It is on display through April 2012 and will not travel to any other venue. During this time period there will be occasional changes in several of the displays, so you will want to return and see the new additions!