We rarely pay attention to what is happening underground, out of our sight. By bringing these treasures to light, we are reconnected to the mineral world, which is rich and mysterious.
–Curator Elise Misiorowski 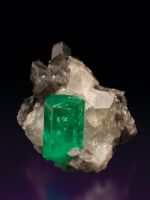 The science behind crystal formations and gem composition

Our Earth produces nearly 4000 minerals. But only a few are so beautiful, rare, and durable that we value them as gems.

A gem is a mineral —an all-natural blend of some basic ingredients. Minerals are combinations of different elements, the basic ingredients of everything in our universe. Scientists know of more than 100 elements, which they organize into a table:  the periodic table of the elements . Through an interactive giant periodic table in the  All That Glitters  exhibition, you will learn how every gem is a combination of elemental ingredients.

Everlasting diamonds
The hardest material on Earth also happens to be a gem. A gem is a mineral that is beautiful, rare, and durable. And no natural material is more durable than a diamond.

Most minerals are combinations of elements:  as few as two, like fluorite (fluorine + calcium) and quartz (silicon + oxygen), or a dozen or more, like tourmaline. Only one—diamond—is made up of a single element (carbon).

Interesting fact:
Analysis of meteorites that fall to Earth from space tells us that the entire universe is made up of the same set of ingredients, endlessly recombined to form every living and non-living thing.

Cave of Swords
Giant crystals of the mineral selenite—some more than 35 feet long—grow in the Naica mines in the Mexican state of Chihuahua. In the mine’s gigantic caverns, undisturbed for millennia, the crystals just keep growing. They are among the largest crystals ever found.

Pegmatites are rocks that form when molten rock (magma) cools. Under the right conditions, as the magma cools, gems can crystallize inside sealed pockets. These are all gems and minerals that you might find in a San Diego County gem pocket.

Not all local minerals are gems
Some have other uses. It’s too soft to be a gem, but the mineral lepidolite is mined in pegmatites as a source of lithium. Lithium is used in batteries, among other things.

Gems from the living world
Some gems come from plants or animals, not Earth processes.

They are beautiful and rare, so we value them as gems. In fact, organic gem materials—shells and pearls, amber and jet, ivory and tortoiseshell—were the first materials our ancient ancestors used as jewelry.