History of Mining in Southern California

San Diego’s mining history is as rich and deep as the mines themselves. The unique geological make-up of southern California has produced some of the most beautiful gems and minerals in the world: tourmaline, kunzite, morganite, topaz, garnet, gold, and more. Over millions of years, deep beneath the sage and manzanita roots of San Diego County, these specimens have undergone complex geological processes before ascending and claiming fame for their abundant beauty.

Mining began in California in the 1800s when the U.S. government encouraged westward expansion to survey the land for valuable resources. Ranchers, cowboys and pioneers settling into southern California discovered gold in the hills east of Los Angeles. This was 1842, six years before the famous California gold rush of 1848. Gold was actually found all over southern California, including our own town of Julian, but its relatively low yield ultimately had minimal impact on the region’s reputation as a mineral-rich area. southern California’s gold did not compete with the riches of the northern California rush. 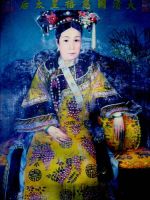 But gold was only one of many valuable resources being mined in southern California. While searching for gold, miners began pulling pegmatites full of museum-quality gems from the hills of Riverside and San Diego Counties. The discovery of pink tourmaline in the Mesa Grande area of San Diego was particularly lucrative, because the Dowager Empress of China at that time happened to have an obsession with it. The trade of pink tourmaline between southern California and China was facilitated by the world-famous Tiffany & Co. The imperial court would place an order, and then Tiffany gemologist J.L. Tannenbaum would commission miners in southern California to mine and ship the requested amount. This process was repeated each time China placed an order until the end of the empire and death of the Empress in 1911. Between 1902 and 1910 San Diego provided imperial China with 120 tons of gem-quality pink tourmaline. In 1969 the Pala Stewart mine hit a new tourmaline adit and produced another ton of hot pink tourmaline before the mine sold in 1980. And the Tourmaline Queen mine produced several “blue cap” tourmaline specimens, and specimens with a peach-colored morganite attached to them, a pocket of tourmaline so perfect in color and size that Vince Manson, then-curator of the American Museum of Natural History called it “the find of the century.”

Pale blue topaz is another southern California specialty. San Diego jeweler John W. Ware owned and operated a small mine on Smith Mountain which produced the topaz. Ware marketed his small mine’s product so well that he eventually had to import blue topaz to meet his demand. 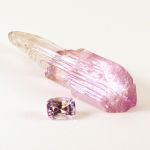 Kunzite and morganite are two particularly unique gems. When kunzite—a pale pink spodumene—was discovered, there was much confusion and deliberation over who had found it first and what exactly it was. Frederick Sickler, who discovered kunzite at San Diego’s White Queen mine, thought that maybe it was a variation of tourmaline. Frank Salmon also found kunzite at the Pala Chief mine and claimed rights to its discovery. Samples of the gem had been mailed to George F. Kunz, another Tiffany gemologist, by Sickler for identification. Kunz verified that it was a new gem and named it after himself, but back in San Diego it was also being called Sicklerite and Salmonite.

Morganite was discovered in San Diego’s Sempe and Tourmaline Queen mines and named by Kunz for one of Tiffany & Co.’s most prestigious patrons, J.P. Morgan. It is a pale purple/light pink beryl, and Tiffany’s still sells select pieces of it for a lofty amount. Kunzite and morganite have since been mined from Afghanistan, Brazil, and Madagascar in far greater quantities, but their discovery and appellation are rooted in southern California.

Jewelers as Miners and Miners as Jewelers

Tiffany & Co. did much to bring international fame and prestige to the mines of southern California. But it was the toil and knowledge of the local miners and jewelers that built the region’s mining legacy. Successfully marketing gem specimens took two types of people: miners and jewelers. Miners knew the ins and outs of the land, the potential of a place to produce specimens, and the techniques to extract them from their carefully hidden subterranean location. Jewelers knew how to turn raw specimens into refined faceted gems, and they knew how to market them. As the case often was, many important San Diegans were people who knew both trades.

Joseph Jessop was a second-generation jeweler who invested much in the mining boom of the early 1900s. He owned and ran the jewelry store J. Jessop & Sons in downtown San Diego, and sold much of what was found locally. The greatest tribute to the mining era was built by Jessop: the Horton Plaza clock tower, decorated with native gems like agate, topaz and tourmaline.

As mentioned before, John W. Ware was a jeweler-turned-miner who moved to San Diego from New York at the turn of the century to take advantage of the mining boom of the times. He owned and operated the small mine on Smith Mountain and successfully marketed his finds. His passion for gems eventually led him to join the American Gem Society, and he became one of the first certified gemologists in the United States.

The death of the Chinese Empress and the beginning of World War I marked a significant end to the mining boom in southern California, and with the later discovery and subsequent dealings of gems from Brazil, it wasn’t until the 1970s that San Diego returned to gem production and distribution. Ralph Potter and Louis Spalding are the miners responsible for the 20th-century renaissance of mining in southern California. To ignite interest in his gems, Potter took his mine’s discoveries on the road in the 1950s, and traveled around the United States advertising that there were quality gems still to be found in San Diego County. Spalding began making money off of an unusual garnet mined from the Little Three Mine in Ramona. These men opened up a new era of dealing in gems and paved the way for San Diego’s current-day renaissance man, Bill Larson.

Larson is both a miner and a certified gemologist, with a degree in geological engineering. He, along with two other prominent miners, formed Pala Properties International, comprised of the Stewart Lithia, Tourmaline Queen and Pala Chief mines. The revitalization of these mines produced another round of world-class gems, including the previously mentioned “find of the century”—the tourmaline/morganite compositions from the Tourmaline Queen. Larson runs two retail stores, one in Fallbrook and one in Carlsbad, and elects to remain low-key about it, despite the value of his collections. These stores attract visitors from around the world and buyers for Tiffany & Co. still peruse his collections in search of potential new pieces.

From Magma to Riches: 180 Million Years of Geologic History Condensed into a Gem of an Explanation 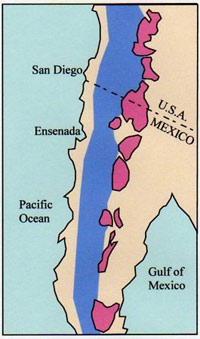 During the Mesozoic era San Diego County was situated along a tectonic plate subduction zone, where the Farallon plate subducted under the more buoyant North American plate.

As the Farallon plate descended, its crust heated and melted, creating hot magma pockets full of rock, salt water, and disassociated chemical elements, which under the right conditions have the propensity to combine. As these pockets of magma bubbled to the surface and cooled, the chemical elements naturally “hooked up” and, with the help of the heat and pressure, created entire pockets of gem crystals. The end result of this geologic process is pegmatite dikes filled with beautiful tourmaline, morganite, golden topaz, garnet, and kunzite.

The gem-filled plutons bubbled to the surface of San Diego County in the  Peninsular Mountain Ranges , better known as the Santa Ana, San Jacinto, and Laguna Mountains, where erosion has made them reachable without the need to blast deep into the Earth. The conditions in these mountains which make gems accessible—the plutons located not too far from the surface plus the constant erosion at the surface—don’t exist in many places where gems might be found, which makes San Diego County a rare and wonderful location for producing gems.