The Horse explores the evolution, nature, and history of these magnificent animals and the impact they’ve made on human civilizations for millennia. To learn more, view the exhibition topics:

Witness a high-definition projection of a horse in motion which depicts the beauty, grace, and strength of these extraordinary animals. Shot at 1,000 frames per second and set to the sounds of thundering hoof beats and the whinnying and snorting of a herd of galloping horses, the footage highlights the horse’s nimble musculature and movement.

The Evolution of Horses 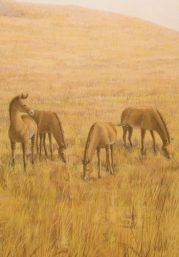 Examine the beginnings of the horse family 55 million years ago and explore the evolution of the horse. Touch skulls, teeth, and toe bones. Come face-to-face with a variety of now-extinct horse species that populated North America’s Great Plains 10 million years ago, including Dinohippus and two three-toed species, Nannippus and Hypohippus. Also, see Dinohippus and Hypohippus skulls and jawbones showing the evolution of the shape of horse teeth over time.

Explore cave paintings depicting early interactions with horses and discover the relationship between our two species—that of hunter and prey. This section includes prehistoric stone tools and horse bones and teeth more than 17,500 years old from the famous horse-kill site of Solutré in central France. View large-scale photographs of cave paintings of horses—including one that dates back some 33,000 years.

Explore a re-creation of the archaeological site of Krasnyi Yar in northern Kazakhstan where researchers are uncovering the remains of an ancient village. See a video interview in which Sandra Olsen, one of the site’s lead archaeologists, explains some of the many steps involved in this work. Learn how domesticating animals such as horses, cows, pigs, and dogs has actually altered the evolutionary history of these animals.

The Nature of Horses

Horses' bodies are strong, living machines that can work all day powered only by grass. Horses have both the ability to comprehend subtle commands and the motivation to obey them. Creatures of instinct, horses accept the authority of herd leaders, making them receptive to taking orders from humans as well. Delve into the many extraordinary qualities of horses that have made them so significant and useful to humans. Take a virtual peek inside a moving, life-sized horse to learn more about its uniquely adapted legs, digestive system, vision, and hearing.

How We Shaped Horses, How Horses Shaped Us

Examine how horses and humans have influenced one another over time and in a variety of ways:

Horses are now used less for warfare, travel, and work, and more for recreation and companionship. With a total of 58.5 million horses in the world today, this bond should remain strong for many years to come.

Explore uplifting relationships between humans and horses through videos, including that of a young disabled girl's growth during therapeutic riding, the trust that develops between a mounted police officer and his horse, and a teenage cowgirl’s connection to her ranch horse. See a spectacular life-size modern horse sculpture created by artist Deborah Butterfield, who constructed the piece out of wood and cast it in bronze.