Gray Whales are Frolicking along the San Diego Coastlines 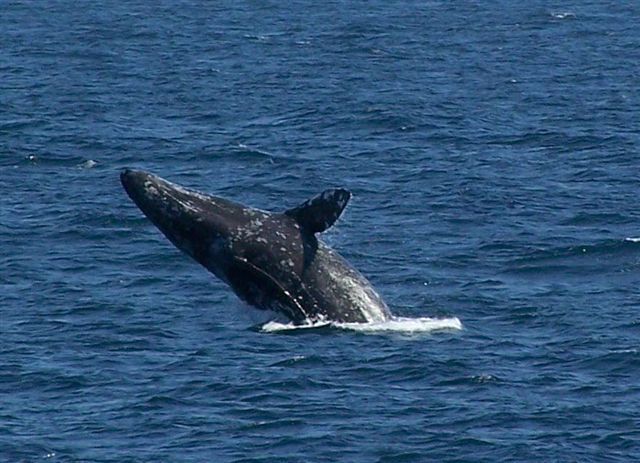 Gray whales are one of the most interesting sights to see off the coast of San Diego each winter. From mid-December to April, these whales pass by San Diego as they migrate from the Bering and Chuckchi seas in the Arctic to the warmer lagoons on the Baja peninsula where they calve and breed. They typically leave the Arctic in the late fall as it begins to freeze over.

Gray whales travel 10,000 to 12,000 miles round trip, one of the longest migrations of any mammal. They are relatively slow whales, traveling 80 to 100 miles on any given day, taking approximately two months to reach their destination. Also of interest, is that the whales eat very little on their journey. The nutrient rich waters of the Arctic are home to their preferred food, so they spend the summer feeding and building up the 8 inches of blubber they use to sustain themselves through the migration.

The gray whale is a baleen whale and is the sole species in the family Eschrichtiidae. Baleen is a keratin-like substance, similar to human hair and nails, that hangs in plates from the top of their mouths. Gray whales are the only baleen whale known to feed almost exclusively on the creatures at the bottom of the ocean. They roll onto their right side (though some individuals are “left-handed” and roll to the left) and take a mouthful of seafloor sediment containing amphipods (small crustaceans); the water and silt are sieved out through the baleen and, with the help of the tongue, the remaining food is swallowed.

Unlike the humpback whale, which is commonly recognized for its acrobatics, the gray whale is fairly predictable in its behavior. Gray whales typically take several breaths on the surface and dive for up to 10 minutes before they resurface and expel air in a distinctive heart-shaped blow. Every now and then, a gray whale will launch its massive body—40 tons of muscle and blubber—out of the water and breach. When it dives, the gray whale shows its flukes which can be up to nine feet wide, an impressive sight.

The gestation period for the gray whale is 12 to 13.5 months and calves are born every 2 to 3 years. Soon after birth, the calf is infested with barnacle larvae and lice. The barnacles anchor themselves into the skin and form very prominent colonies of distinctive white craters on the top and sides of the whale’s head. Between the barnacles crawl enormous quantities of small pinkish crustaceans, the whale lice. The gray whale is host to three different species of these crustaceans, two of which, again, are found solely on the gray whale. If the animal dies and is washed ashore, the lice and barnacles die with the whale, their only viable world.

The gray whale was listed as endangered under the U.S. Endangered Species Act in 1973. However, there is good news for this once endangered species: the population has rebounded from near extinction during commercial and aboriginal whaling to approximately 20,000 individuals today. According to the National Oceanic and Atmospheric Administration (NOAA), the population is nearing the “carrying capacity” for the ecosystem, meaning the current population will most likely stay at this level if food sources remain consistent.

To see these animals in their natural habitat join our Museum Whalers, our trained naturalists, on a whale watching cruise with Hornblower Cruises and Events. Ships depart daily from the San Diego Navy Float at 970 North Harbor Drive, San Diego, CA 92101.

For more information or to purchase discounted vouchers through theNAT, click here. Season ends in April so act soon!