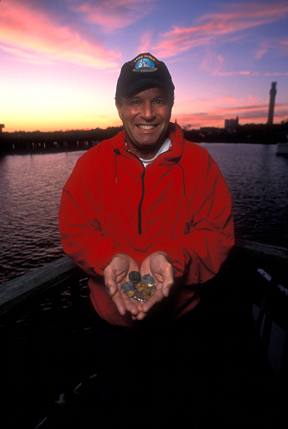 Barry Clifford is among the world’s best known underwater explorers. Born in 1945 on Cape Cod, Mass., Clifford has been involved in underwater surveys and excavations most of his adult life.

Clifford, a former high school teacher and football coach, started a salvage-diving business in the mid-1970s, and between 1974 and 1984 conducted dive-related work, including underwater construction, oil-spill control, and contract sea-rescue. During this period, he also utilized historical research, remote-sensing techniques, and underwater surveys to locate numerous shipwrecks around Cape Cod.

In 1984, Clifford made world headlines with his discovery of the remains of the Whydah, wrecked in a storm off Cape Cod in 1717. The Whydah is the first fully-authenticated pirate ship discovered in American waters.  Her treasures are still being recovered today with the help of Clifford’s 75-foot vessel, Vast Explorer. With more than 100,000 artifacts recovered and conserved to date, this project has vastly expanded the public’s understanding of 18th century piracy.

Clifford has kept the Whydah collection intact at Expedition Whydah Sea-Lab & Learning Center in Provincetown, MA., where it has been described by state and federal oversight agencies as “a model for private archaeology.”  This facility has proved to be a unique showcase for what underwater exploration can accomplish through careful historical and scientific research.

Clifford was involved in the discovery, survey, and recovery of numerous other shipwrecks in the 70s, 80s and 90s. In 1999 and 2000, Clifford and his team completed three major expeditions to Ile Ste. Marie off the coast of Madagascar, initially discovering five shipwreck sites, two of which have been identified as the Adventure Galley, flagship of the infamous William Kidd, and the Fiery Dragon, commanded by the pirate William “Billy One-Hand” Condon. The other three shipwreck sites have been tentatively identified as the Ruparrel, The Mocha Frigate and The New Soldado.

For the past four years, Clifford has been working to identify the remains of the Santa Maria, the flagship of Christopher Columbus.  He is also working on an ongoing archaeological survey project off the Haitian coast that has initially identified four shipwrecks associated with pirate Henry Morgan, including Morgan’s flagship, The Oxford.

Clifford is the author of four books: The Pirate Prince, Expedition Whydah, The Lost Fleet, and Return to Treasure Island. He is currently working on a book about his search for the Santa Maria and his experiences in Haiti.

Clifford is a Fellow of the Explorers’ Club, a 2005 recipient of the Rolex-Lowell Thomas Award for his achievements in underwater archaeology, and a Discovery Quest Scholar. In 2006, he was named Explorer-in-Residence by the American Museum of Natural History in New York. He is married with three children.