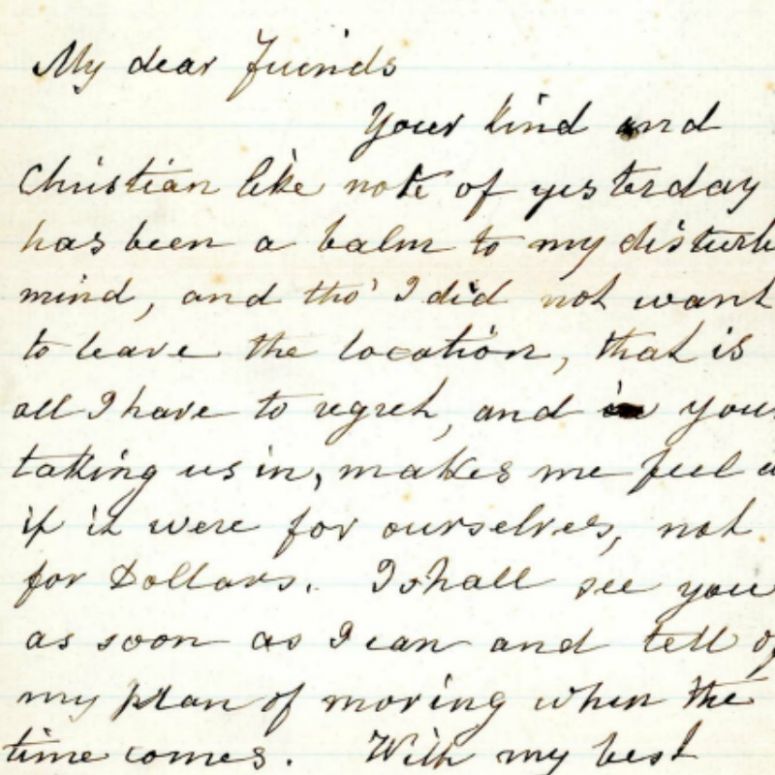 As a librarian, I often wonder about the impact or significance of some of the documents we house in our Museum archives. Some are literally scraps of paper, almost illegible with the passage of time. But as fragile and insubstantial as many appear, to hold them in your hand is to also gaze through a window into history.  They offer us a tangible glimpse, however minuscule, into another person’s previous existence, and in some ways remind us of our own transience in life.

These thoughts occurred to me as I held in my hands a faded hand-written letter from 1864, written by Lucy Audubon.

Most people have heard of John James Audubon, famous artist of The Birds of America, who created the extraordinary life-size paintings of North American birds featured in The Nat’s copy of the so-called Double Elephant Folio, on display in our Extraordinary Ideas exhibition.

Lucy Bakewell Audubon was J. J. Audubon’s wife of over 40 years. Despite her husband’s eventual fame, it was not an easy union for her. She bore four children (two of whom died in childhood), and endured very long absences from her husband as he traveled extensively both in America and overseas. Audubon was a man obsessed with pursuing his dream, whether in the wilds studying and sketching birds or in England or France obtaining financial support for his very expensive publication. As a wife, Lucy not only spent many years as a single parent, but also had to deal with financial stress and ruin. At one point, her husband was even briefly jailed for bankruptcy. Their finances were always tenuous, and she contributed to the family’s income working as a teacher during the years when Audubon was struggling to make his name as a bird illustrator.

Audubon died at 1851 at the age of 65 but Lucy lived until she was 87. We might assume that at least Lucy had a peaceful old age, resting on the fame of her internationally known husband and his monetary rewards, but that was not to be the case. Her two sons died while in their 50s, and the family finances continued to disintegrate. Many of the massive original copperplates used for Audubon’s folios, each weighing as much as 37 pounds, were sold for scrap, as inconceivable as that may seem today.

In her older years, living in New York, Lucy became friends with the family of Rev. Charles C. Adams, who served as rector of St. Mary’s Church in Manhattanville, a neighborhood in West Harlem. She was living with her granddaughter Harriet, who lived with Lucy into adulthood because she had lost both her parents earlier in life. According to her own writings, Lucy petitioned the Adams family to allow her to board with them at the rectory, as she and Harriet had no other acceptable place to live. This letter, found in our library archives, gives a glimpse into Lucy’s predicament discussing her “disturbed mind” as she writes a note thanking the Adams family for offering both women a home.

But how did this letter and one other end up in San Diego at our Museum? It was found in the papers belonging to General Anthony Wayne Vogdes who married one Ada Adelaide Adams, daughter of the Charles C. Adams who offered Lucy and her granddaughter a place to live. The sometimes circuitous ways of history brought the letters of Lucy Audubon to our library after the death of General Vogdes and the subsequent donation of his books and papers.