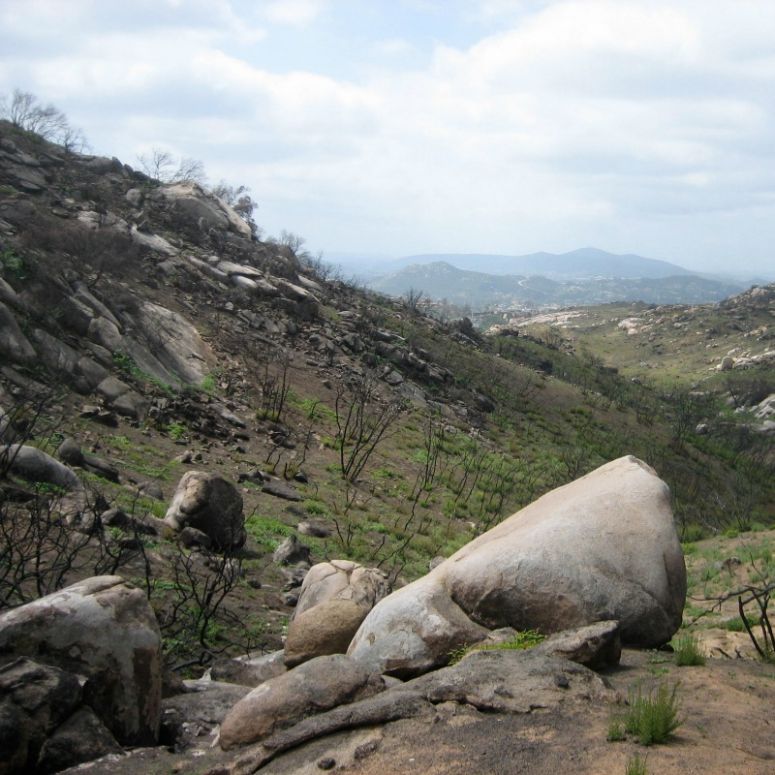 Climate change poses a serious threat to life in and around San Diego. It has resulted in rising sea levels, more frequent droughts, and increasingly severe wildfires: headline-grabbing natural disasters that are easy to see. There are many other more subtle—yet alarming—ways a warming climate is affecting wildlife in our region.

Today’s climate change is occurring over decades, not millennia, and our scientists are eyewitnesses to its effects on our biota. They study how our region is changing over time, especially from human-caused impacts, and document changes in ecosystems that have long-term implications. Here are just a few.

California has always had periods of drought followed by periods of heavy rain—it’s part of who we are. But the weather patterns have become less predictable, and periods of extreme drought have lengthened. This has spelled trouble for many local habitats.

Clearly, trees need water to grow, but water also helps them resist a variety of other threats. Water stress makes trees more susceptible to disease, pests, and parasites. Our local forests have seen their share of devastation brought on by infestations of native bark beetles. In normal circumstances, healthy trees are able to survive and recover from infestations. But in extended drought, their resiliency dwindles.

The scale of tree die-off throughout our state in recent years is unprecedented in modern history. The U.S. Forest Service estimates 129 million trees have died since 2010 in California’s national forests due to conditions caused by climate change, unprecedented drought, bark beetle infestation, and high tree densities.

This is seen locally in large tracts of California juniper death at the desert’s edge in Anza-Borrego as well as in our local pine forests in the Cuyamaca Mountains. To emphasize this point, even cacti cannot survive prolonged drought, and the die-off of cholla in the Coachella Valley contributed to the extirpation—or local extinction—of a rare bird species, the LeConte’s thrasher.

And, more dead trees means more fuel for raging fires. Which brings us to…

The increased frequency and likelihood of wildfires make recovery difficult for everyone.

Southern California’s shrublands—coastal sage scrub and chaparral—and the animals that live there have adapted well to cycles of drought, sporadic rainfall, and wildfire. However, climate change seems to be lengthening the drought cycles, undermining the shrublands’ health and recovery from wildfire. Rising temperatures and more frequent heatwaves also contribute to wildfire occurrence.

Repeated fires, with little time for recovery in between, decimate species we think of as common, such as the California thrasher, brush rabbit, and big-eared woodrat. To make matters worse, frequent fires often give fast-growing, invasive plant species opportunities to overtake native vegetation. Several invasive species of grass crowd out native grasses and create more tinder for the next fire. It creates a vicious cycle of fires that hinders recovery of native species.

Animals’ historic ranges are changing. Some moving to higher, cooler elevations. Others are moving downslope.

Museum scientists have documented many species shifting their ranges to higher, cooler elevations or moving north. The lodgepole chipmunk and San Bernardino flying squirrel have disappeared from the southern tip of their ranges in the San Jacinto Mountains.

Birds like the black swift have shifted out of traditional nesting areas in the San Jacinto Mountains, while more southern species that once occurred only as rare visitors from the south, like the zone-tailed hawk and yellow-crowned night-heron, are now nesting in California regularly. Five species of boobies, tropical sea birds, are starting to be sighted regularly, and since 2005 the brown booby has established a thriving colony on Los Coronados Islands.

In a period of a warming climate, organisms shifting northward and upslope is predictable. What has surprised our scientists is that some bird species appear to be spreading south or downslope (learn more about that here).

The mechanisms by which climate change causes range changes are not always clear, and undoubtedly vary widely from species to species. Why is this a problem? Species are interrelated. Departures and arrivals have ramifications throughout the food web. Plus, it means species may move out of reserves and protected areas, which can be a long-term conservation concern.

Reduced rainfall has threatened or contributed to the extirpation of some aquatic species, particularly those dependent on reliable seasonal rainfall patterns to fill rivers, streams, and other wetlands.

One example is the California red-legged frog, which was locally extinct for more than 20 years until a binational team of scientists reintroduced them to a reserve near Santa Ysabel. Because frogs need water to lay eggs and let their tadpoles develop into baby frogs, less rainfall means shallower ponds, lowering the probability that tadpoles will have enough time to complete their aquatic life stages. Our team is boosting survival of the source population in Baja California by digging deep ponds that provide perennial bodies of water for the frogs. This will help ensure that the hydroperiod, or duration of water availability, is long enough for the frogs to complete their life cycle.

Another example is the spadefoot frog, a nocturnal frog with cat-like eyes that depends on vernal pool habitats for survival (vernal pools are temporary seasonal wetlands that fill up with water during winter and spring rains). Spadefoot frogs sleep underground in burrows until vibrations from rainfall trigger their emergence to the surface, where they seek pools to breed and lay eggs. The resulting tadpoles can metamorphose into frogs in as little as two months—but not if the vernal pool dries up too quickly. Droughts and increasingly higher average temperatures reduce the probability that tadpoles will become frogs. This reduces population sizes, which could eventually lead to the spadefoot frog’s extinction.

We will always strive to protect these species, but that work will fail if we do not curb rapid climate change.

These may seem like isolated problems. But species are dependent on each other for survival, and problems reverberate and compound as they move through the food web. As landscapes change, so do the plants and animals that depend on them for survival. Add the effects of climate change to habitats already stressed by development, invasive species, pesticide use, pollution, and other factors, and ecosystems reach the breaking point.

These examples are just a few of the ones we study. But they are indicative of the larger problem affecting life on our planet. For each of the issues we study, how many undocumented issues exist that we may not even know about yet?

The scientific community no longer talks about stopping climate change because we’re in the midst of it now, but is looking for ways to slow and mitigate the change that is inevitable. And our work is an important piece of this puzzle.

Studying biodiversity and monitoring change over time is the backbone of the Museum’s research—some might say we do the research that makes conservation possible. Our scientists are actively working with land managers, state and federal agencies, and conservation partners to mitigate the effects of habitat loss and climate change.

The Museum is also taking actions to reduce our own carbon footprint and to use our science, education, and public communication tools to work toward solutions.

Climate change and the way it affects our state’s wildflowers is at the center of our upcoming exhibition, California Blooming: Wildflowers and Climate Change, which will be on view when the Museum reopens. Also, we are partnering with Climate Science Alliance on a series of Nat Talks focused on the impacts of climate change in our region—they will take place quarterly throughout 2021.

So, what can any one of us do to help? Stay tuned for a future post sharing what actions each of us can take to help curb climate change.