Guadalupe Island: From Mecca to Mess—and Back Again. 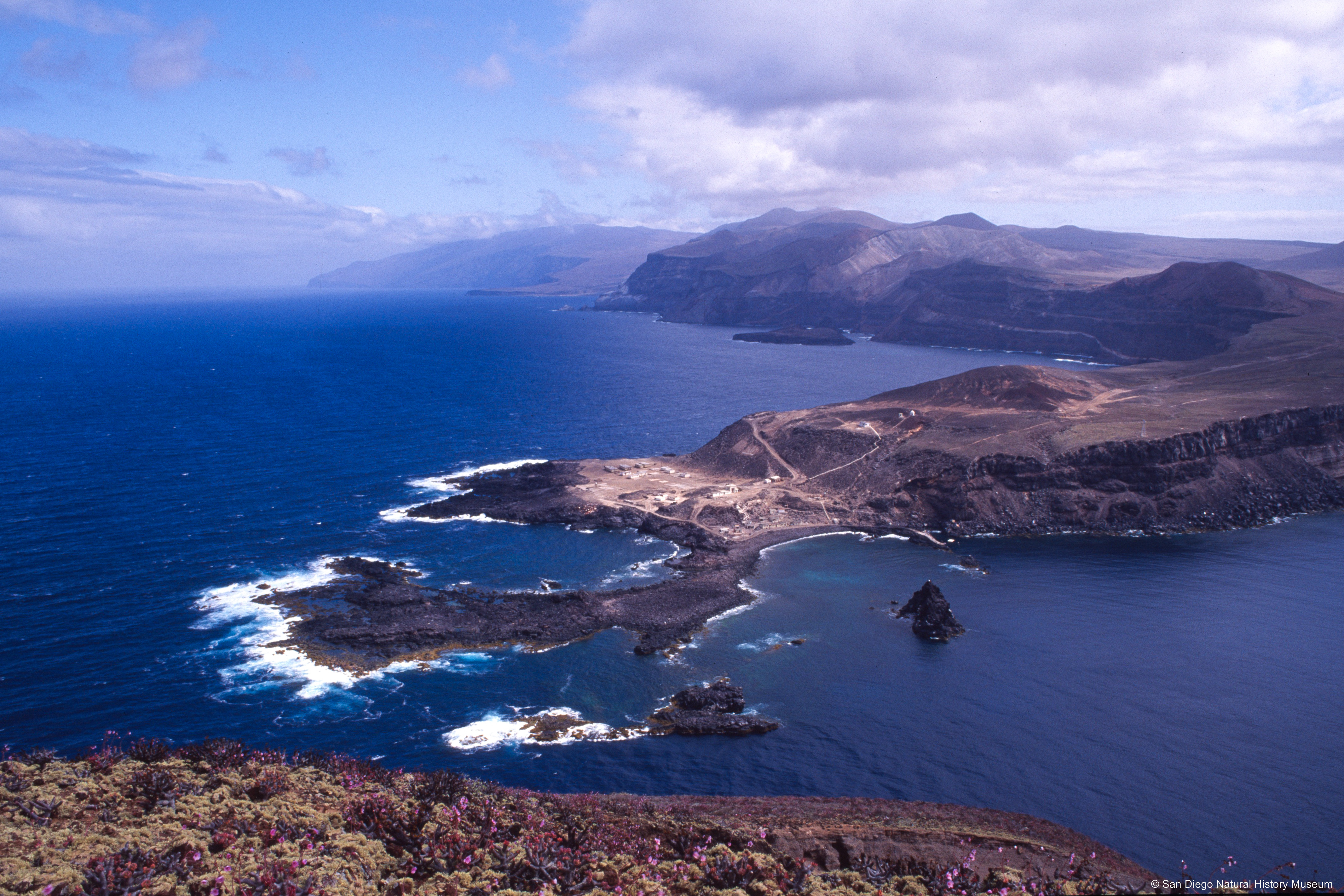 If Isla Guadalupe were laid over San Diego, it would stretch from the US-MX border to Highway 52. It is only 22 miles long, but this single chunk of land weathers tropical summer storms, near constant fog banks, and occasional winter snow.

Some of the island’s inhabitants are endemic, meaning they exist nowhere else on Earth. The Guadalupe palm (Brahea edulis) and Guadalupe cypress tree (Cupressus guadalupensis), and birds like the dainty Guadalupe storm petrel (Oceanodroma macrodactyla) and the majestic Guadalupe caracara (Caracara lutosus) were once found here and only here.

Described as a “naturalist’s paradise,” Isla Guadalupe hums with biodiversity. During the last 200 years, visiting scientists have recorded more than 260 species of plants and 100 species of lichens living here.

That is, until humans arrived to the scene.

Death by a thousand goats 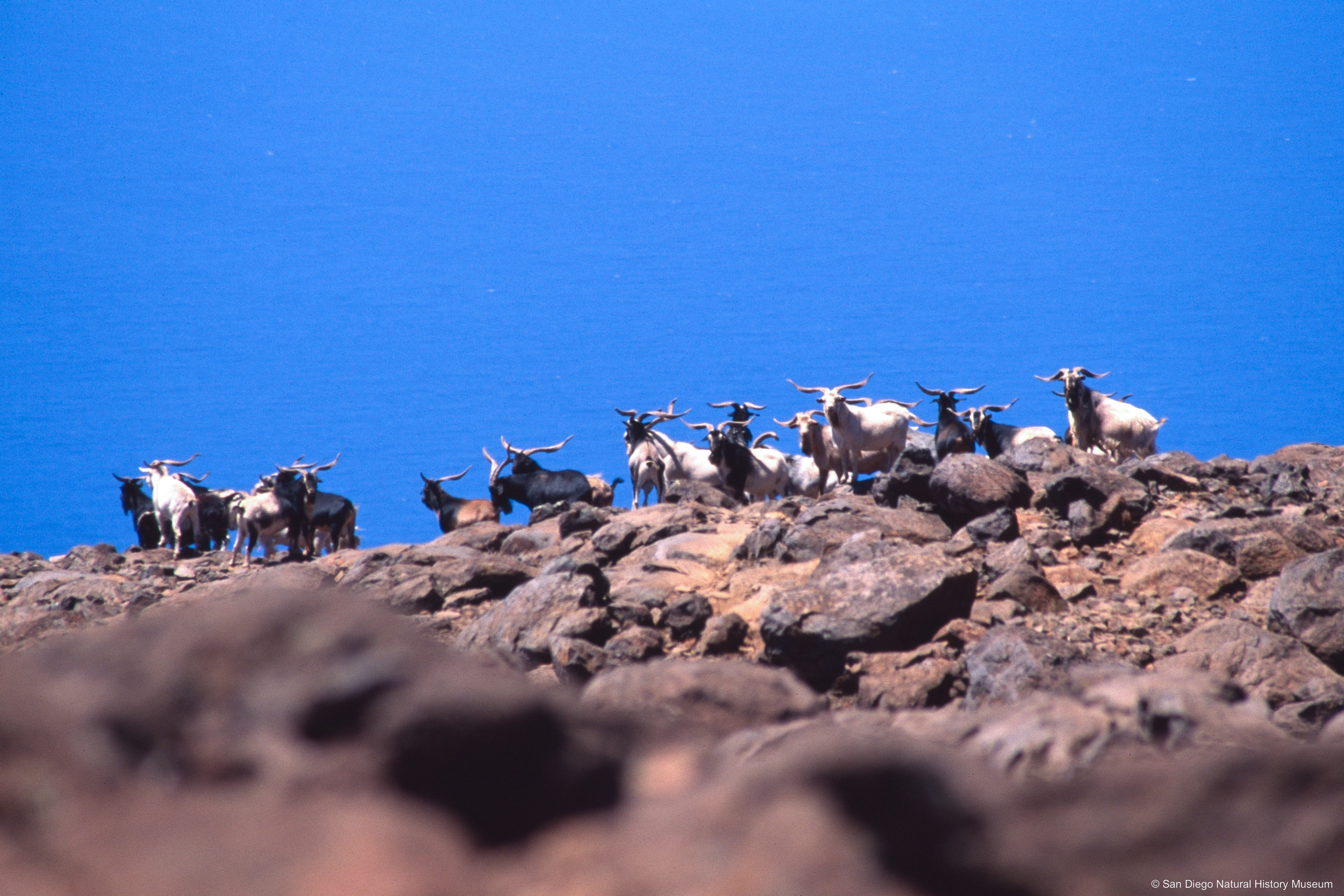 This once-thriving ecological outpost was forever changed in the 19th century when fur hunters from around the world arrived in search of fur seals and sea otters. Over the following century, hunters, traders, and fishers transformed the island into a commercial outpost—and an ecological mess. 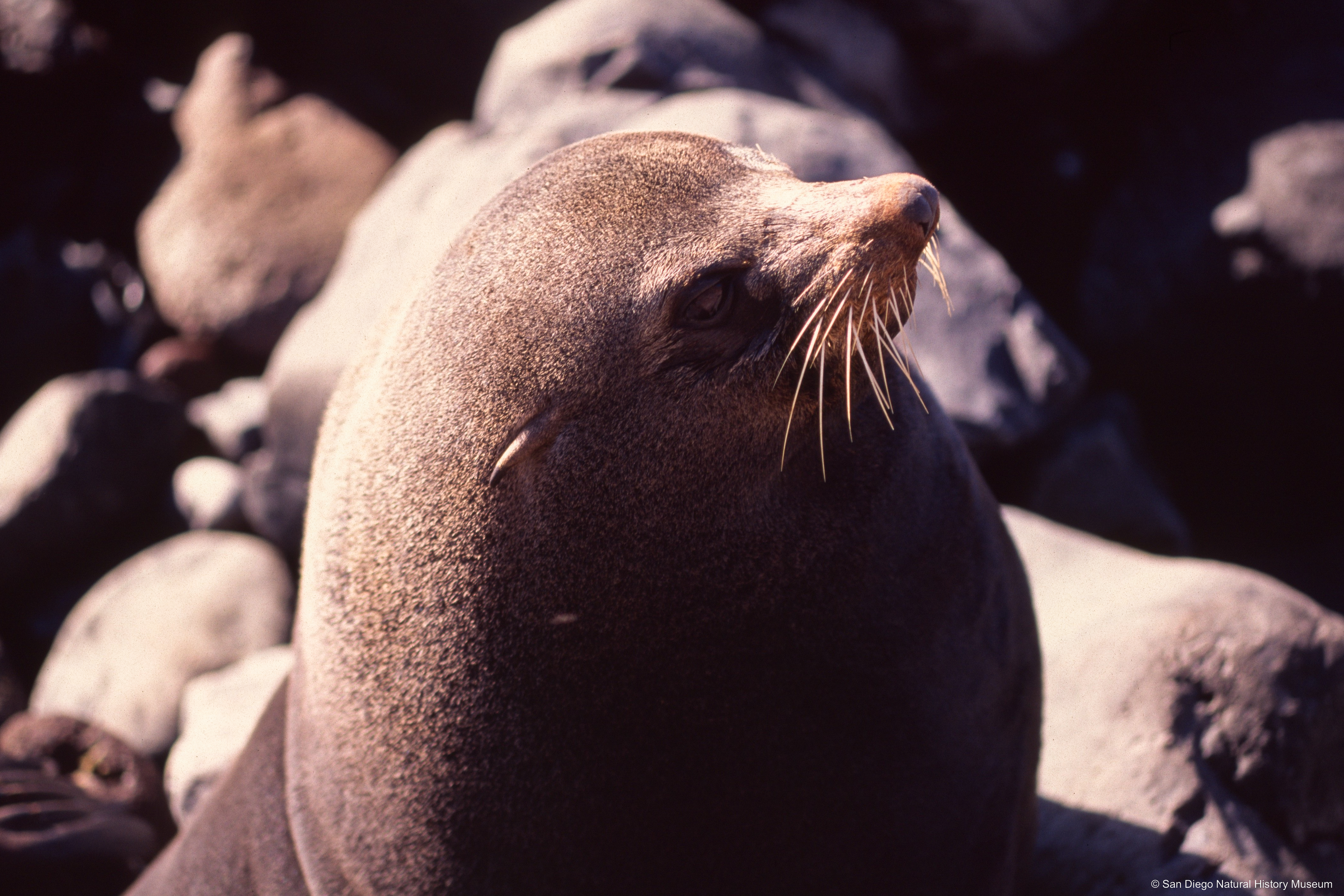 In the early 1800s, Isla Guadalupe was established as both a stop-over point and destination for harvesters. Fur hunters and whalers placed cows and goats onto the island to serve as a food source, and also (sometimes unwittingly) introduced mice, cats, and even dogs. 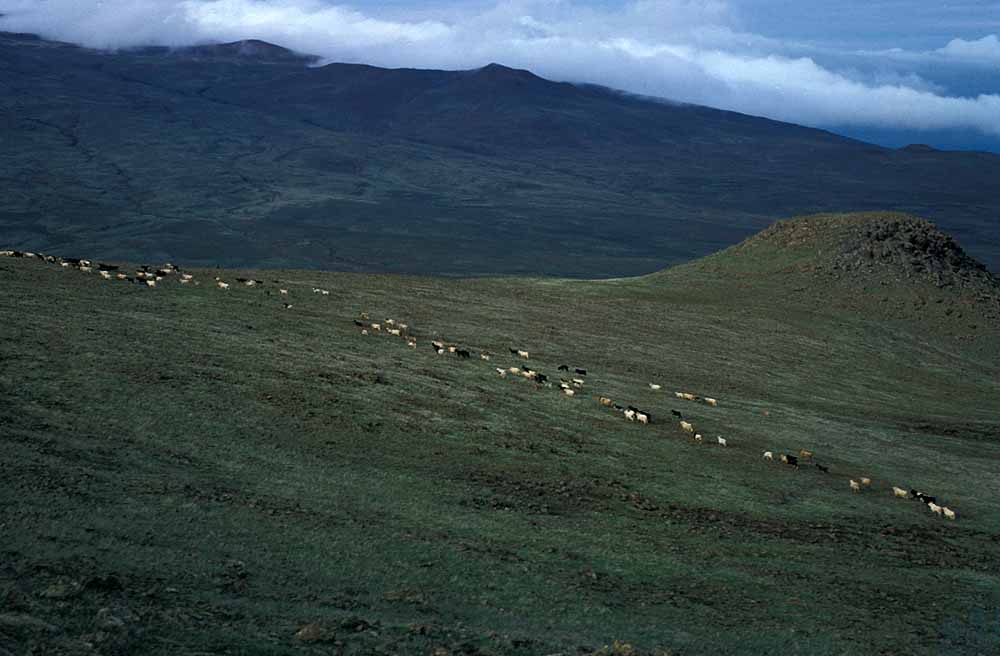 In the mid-1800s, the introduced mammals (except for the cows) established feral populations all over the island. The mice, cats, and dogs ate the native birds and their eggs, while the goats and cows trampled and overgrazed the plant life. Hunters continued to cull marine mammals and shot the caracaras. 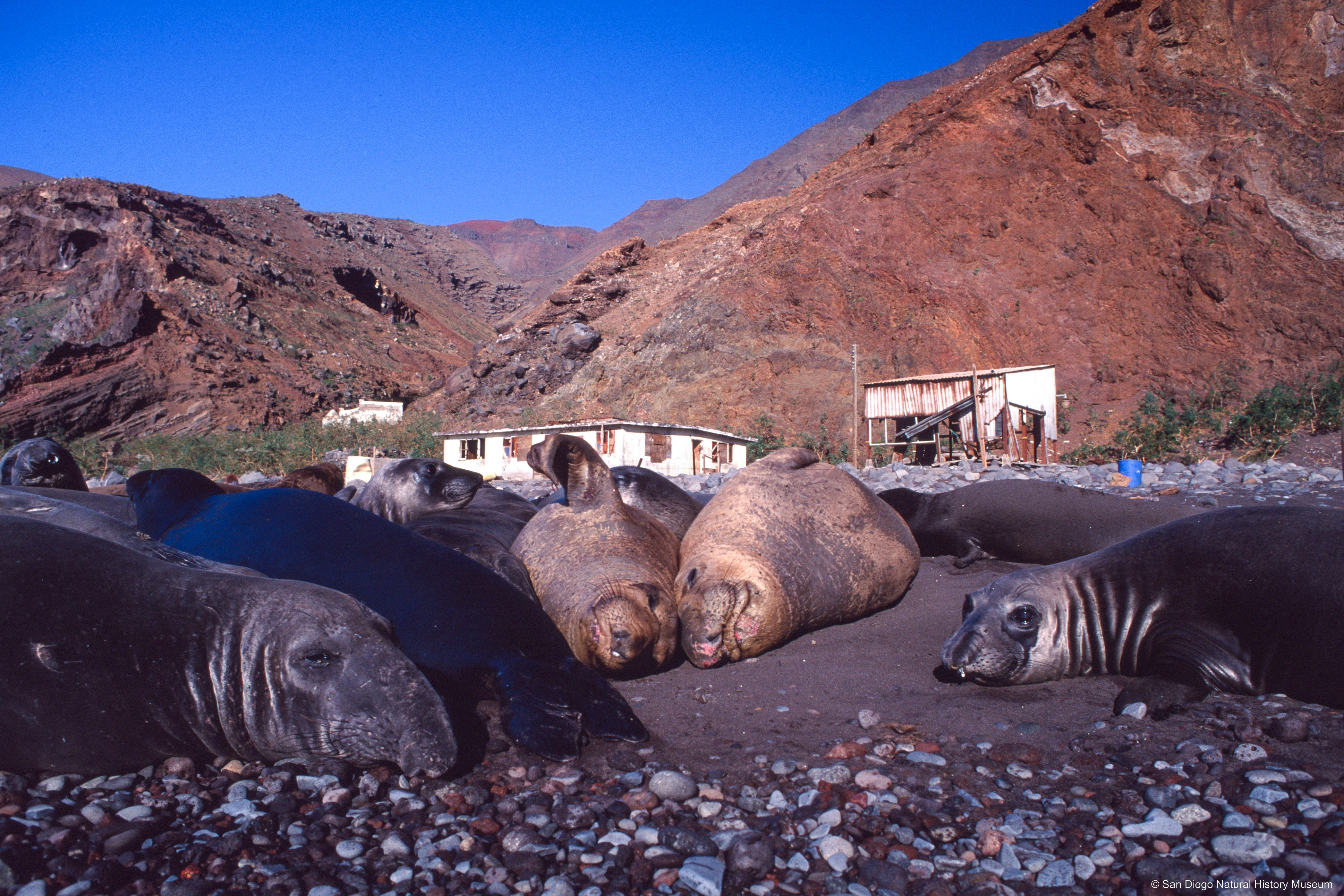 By the late 1800s, upwards of 100,000 feral Angora goats roamed Isla Guadalupe. For several decades, the goats were rounded up and exported to San Francisco and beyond for their hides, meat, and tallow. Northern elephant seals, hunted for decades for their blubber, had been thought extinct until a small population of eight individuals was found by Smithsonian naturalists at Isla Guadalupe in 1892 (all northern elephant seals today are descendants of those few found on the island).

Within 100 years, every single one of Isla Guadalupe’s 12-15 different plant communities was altered, reduced, or completely eliminated. Even the forests had been stripped down by the hungry goats. By the end of the 19th century, much of Isla Guadalupe was reduced to bare ground. The remaining native plants were devoured by goats and crowded by several species of invasive European grasses.

More than a century of questions

Since the 1870s, naturalists and researchers, including those from the San Diego Natural History Museum, have been documenting the changes undergone by Isla Guadalupe. These expeditions and observations formed a foundation that became an impetus for change. 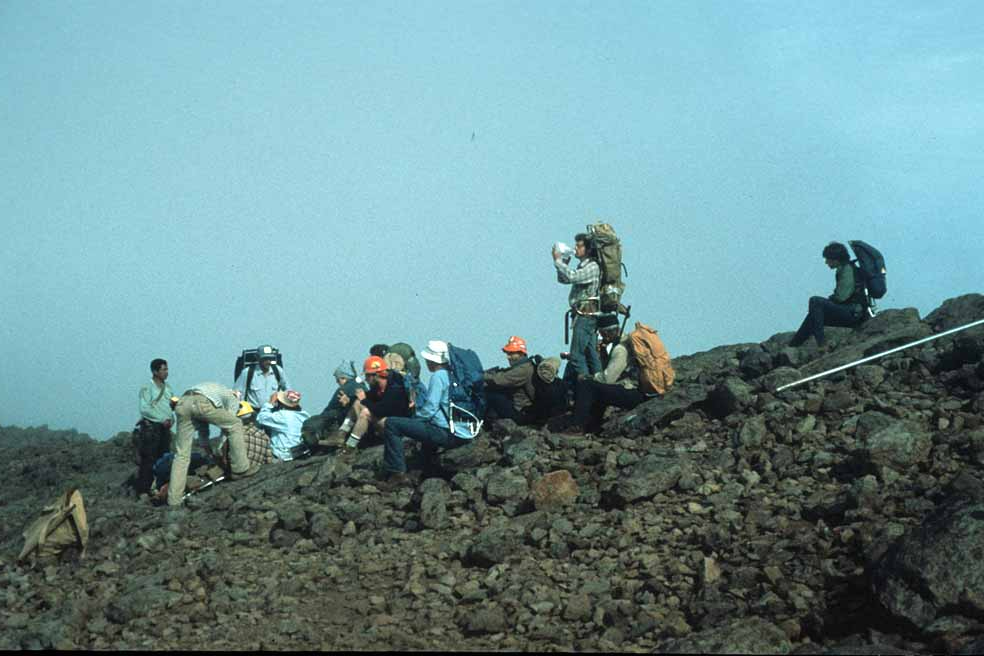 In the 1920s, Curator of Birds and Mammals Laurence Huey conducted early expeditions to the island, documenting much of the ecological damage and history of human occupation. 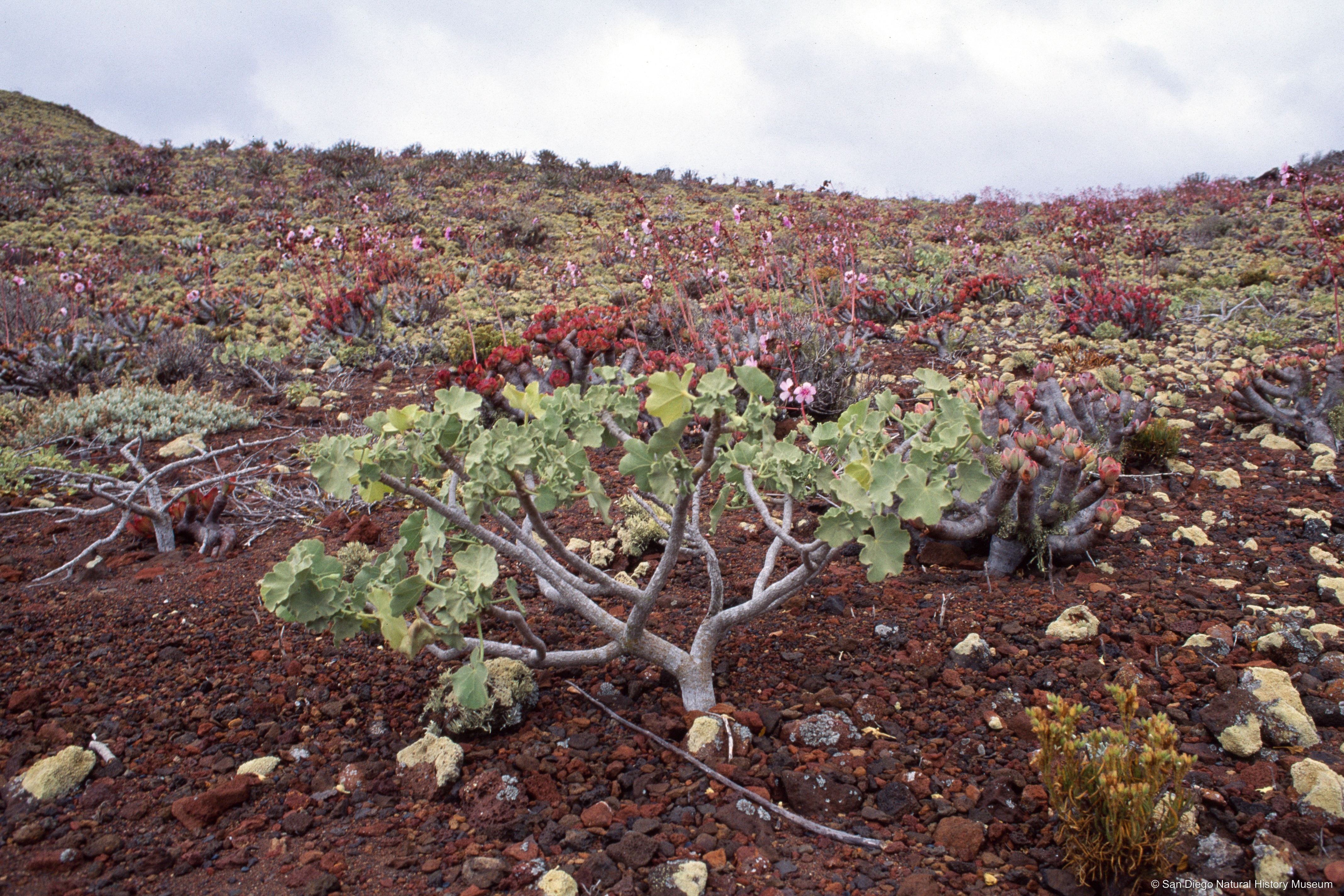 From 1948 to 1988, Curator of Botany Reid Moran completed more than 20 expeditions to Isla Guadalupe, resulting in the publication of The Flora of Guadalupe Island, Mexico in 1996. This book documented all of the known plant life on the island, including species that were threatened and thought to be extinct. “Guadalupe [Island]... is a naturalist’s paradise despoiled by feral goats, house cats, and mice. [The island] is a Mexican national treasure in dire need of protection,” Moran wrote. 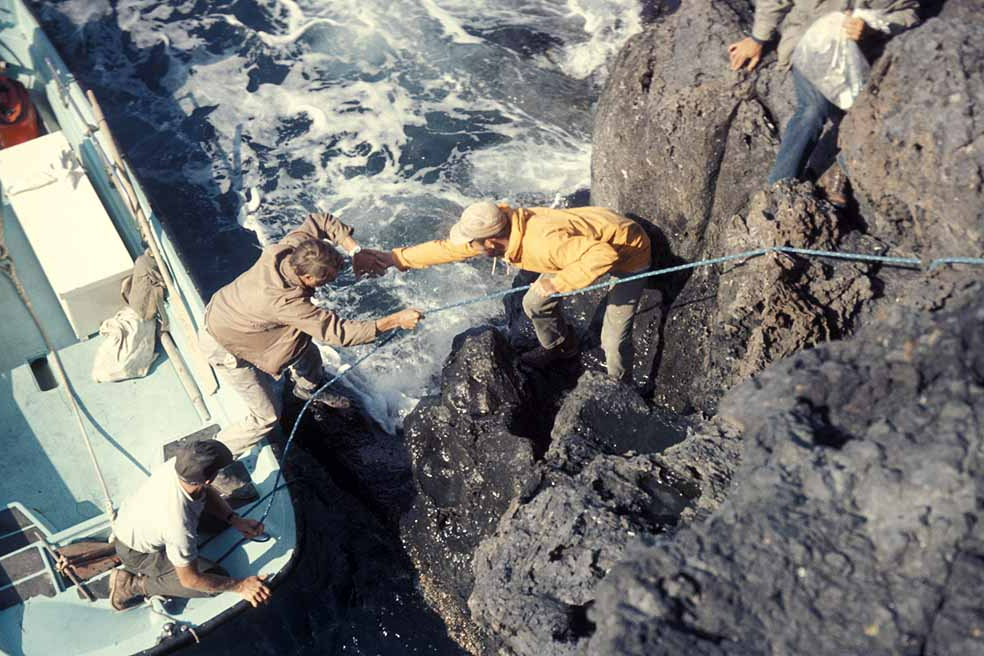 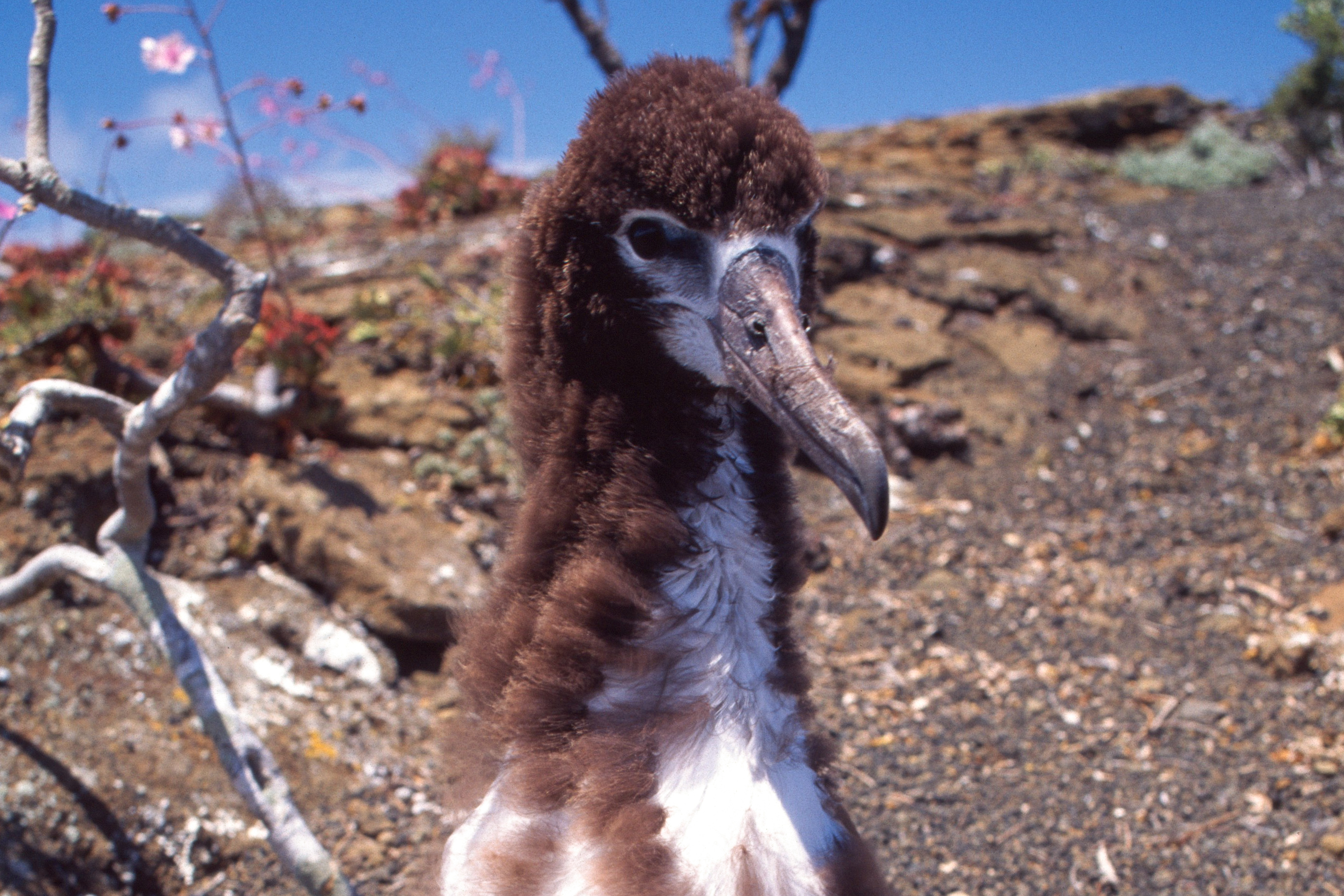 From 1969 to 1980, Curator of Birds and Mammals Joseph Jehl and Research Associate Bill Everett made several trips that led to the publication of History and Status of the Avifauna of Isla Guadalupe, Mexico in 1985. Their research called for a more exhaustive search for the possibly extinct Guadalupe storm-petrel. 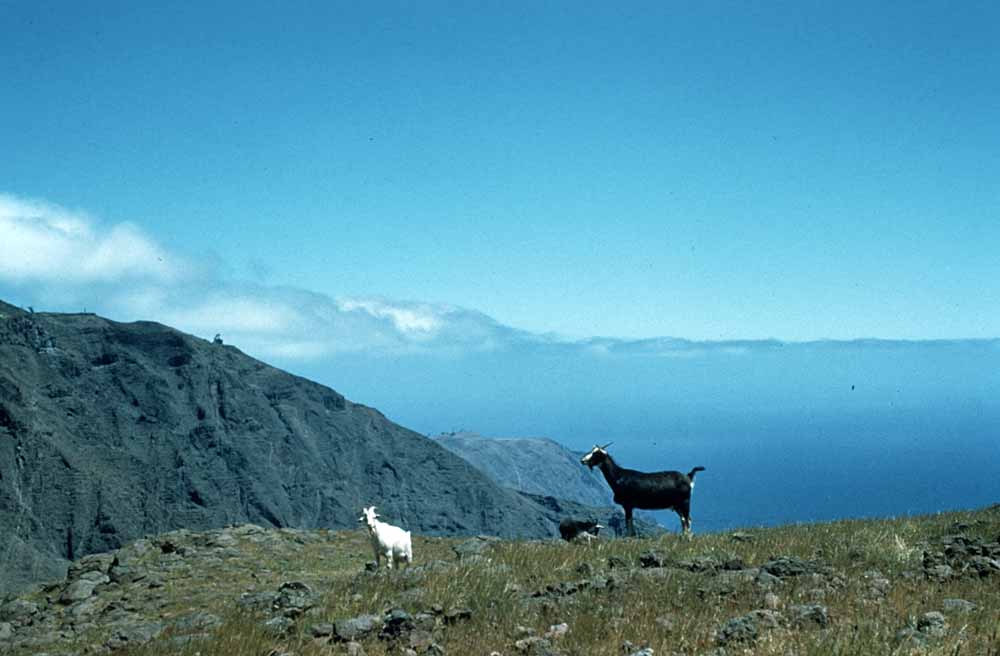 Throughout the 1990s, Mexican conservation groups from Baja California like the Ensenada Center for Scientific Research and Higher Education (CICESE) and the Island Ecology and Conservation Group (GECI) began initial efforts to remove or relocate the feral species. Many goats were rounded up and given to impoverished communities on the mainland for food. They also installed goat-exclusion fences, which illuminated the flora’s ability to bounce back.

The expedition of a lifetime

At the turn of the century, scientists from the Museum's Biodiversity Research Center of the Californias (BRCC) embarked on an expedition to Isla Guadalupe. The trip was binational, with researchers from the Museum, universities, conservation organizations, and governmental agencies on both sides of the border. It was also multidisciplinary, with experts on birds, plants, insects, spiders, fossils, reptiles, amphibians, marine mammals, algae, geology, and ecology. The main purpose of this huge expedition was to survey and assess how badly the island's flora and fauna were disturbed.

By 2000, the amount of scientific literature on the island's poor ecological state was growing, but most of the previous research had been conducted at lower, more accessible elevations or was sorely out-of-date. More data was necessary to usher in the changes Moran and other scientists had called for in the 1980s and ‘90s. 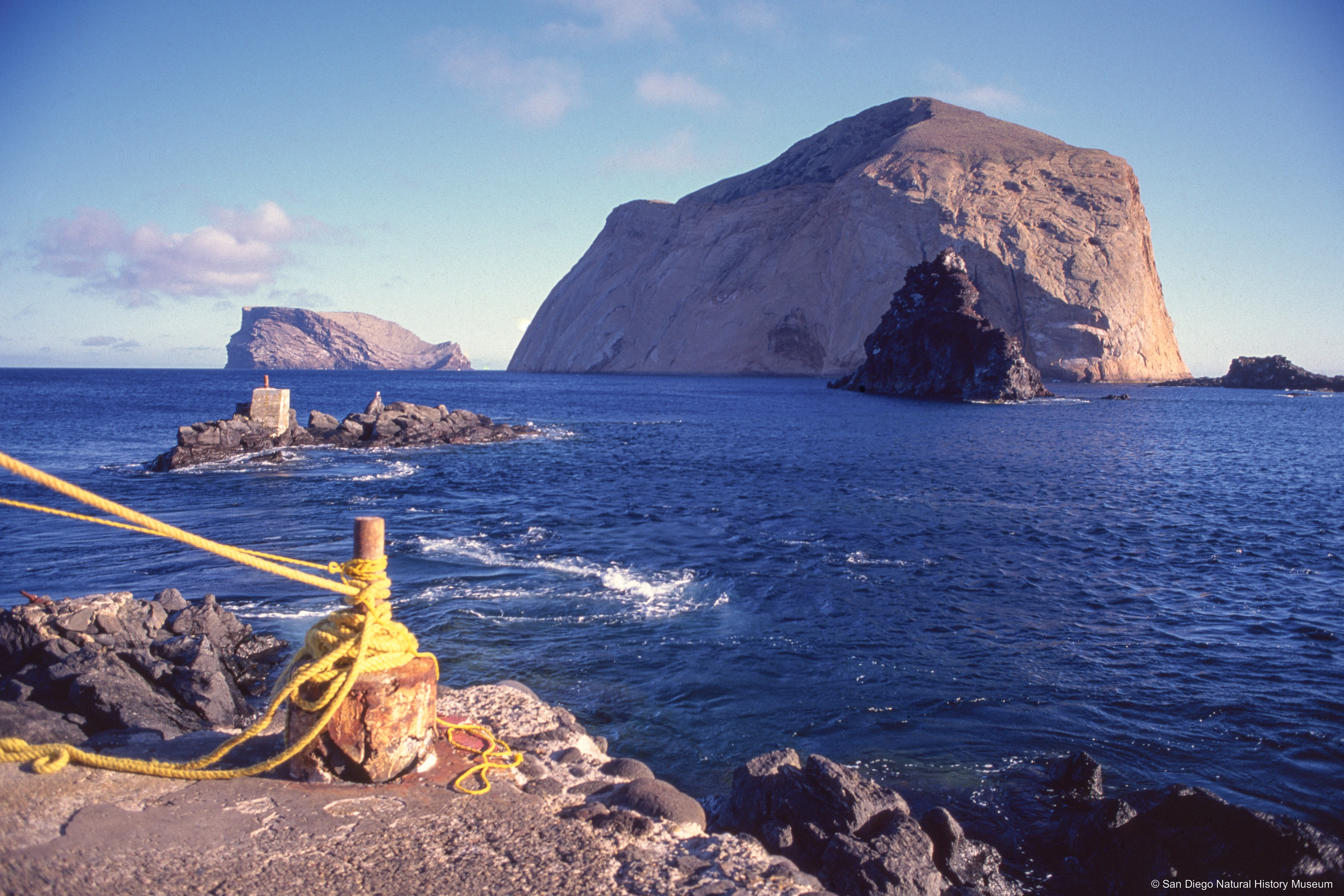 For the Museum’s botany team, a key part of the expedition was to visit Islote Toro, a sheer-rock islet off the southern tip of Isla Guadalupe. Previously unexplored, untrampled, and untainted by any invasive species, this islet offered a window into the past, before humans changed everything. Our team reached the islet by helicopter to study and compare its pristine plant communities with those at southern end of the main island.

“Islote Toro allowed us to see what the main island would have looked like on its southern end, had humans and goats never discovered it,” said Dr. Jon Rebman, Curator of Botany at The Nat. “To actually see what the main island might have looked like was amazing. There were succulents everywhere. Virgin vegetation like that, where there are practically no weeds, is extremely hard to find.”

The ornithologists were focused on searching for the Guadalupe storm-petrel (Oceanodroma macrodactyla), a nocturnal sea bird thought to be extinct due to predation by feral cats. Storm-petrels spend most of their time far out at sea, except when they come to breed and nest in underground burrows. They used to lay their eggs beneath the pine and cypress forests at the higher elevations on Isla Guadalupe’s northern end. 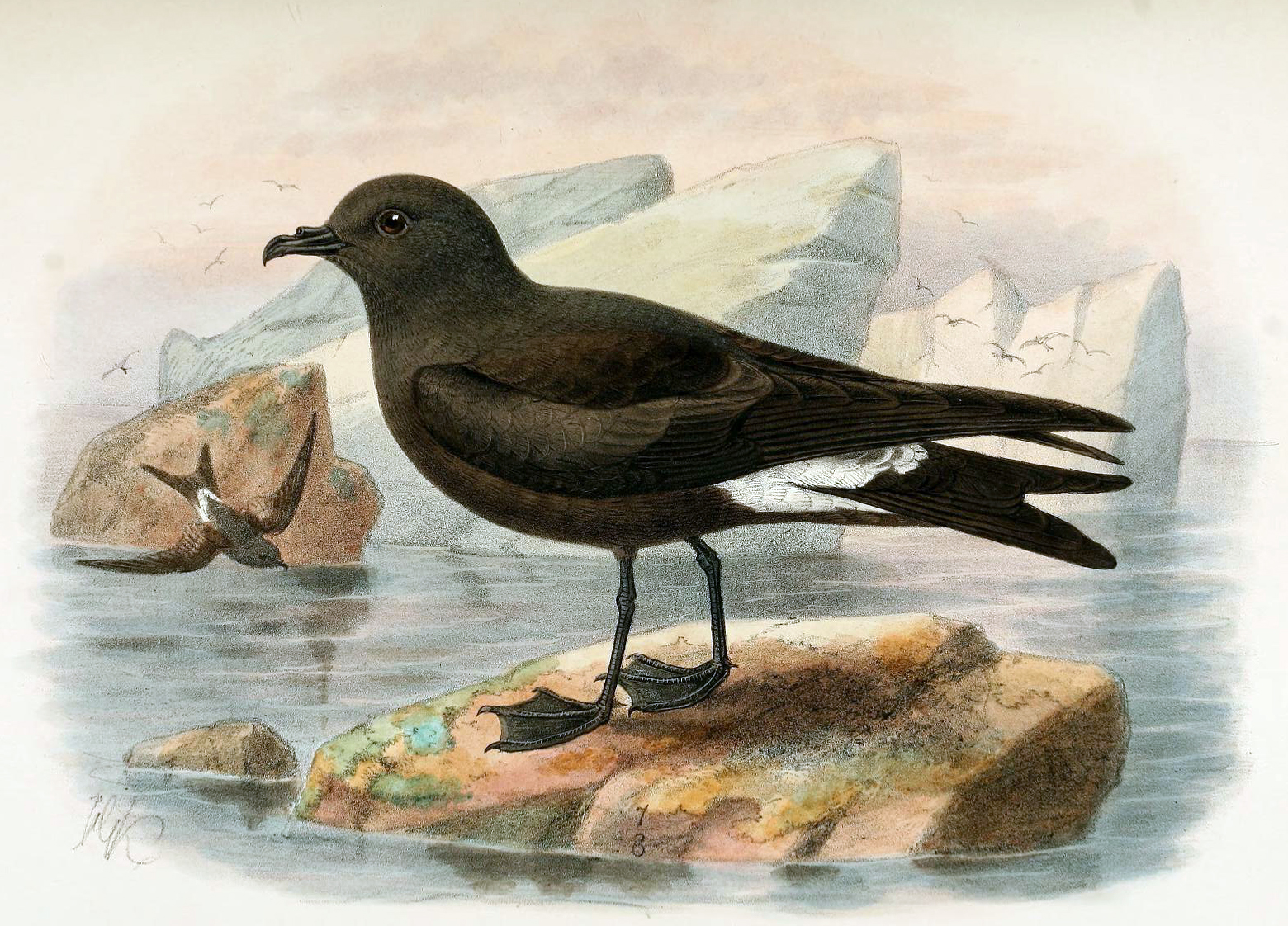 There was hope this endemic bird, not seen since 1912, was still in existence. The expedition’s dates paralleled the breeding season, making it an opportune time to find the small, grey birds in their nesting grounds, but there was no sign of them.

“We searched thoroughly for the Guadalupe storm-petrel, and failed to find it,” said Dr. Exequiel Ezcurra, former director of the Biodiversity Research Center of the Californias and principal investigator for the expedition. “Sadly, we are now more ready to admit that the species is indeed extinct.”

Phil Unitt, Curator of Birds and Mammals, focused his attention on the Guadalupe ruby-crowned kinglet (Regulus calendula ssp. obscurus), a small passerine with a reddish-pink patch on its head. Once an abundant nester among the cypress trees, this species was also thought to be extinct. 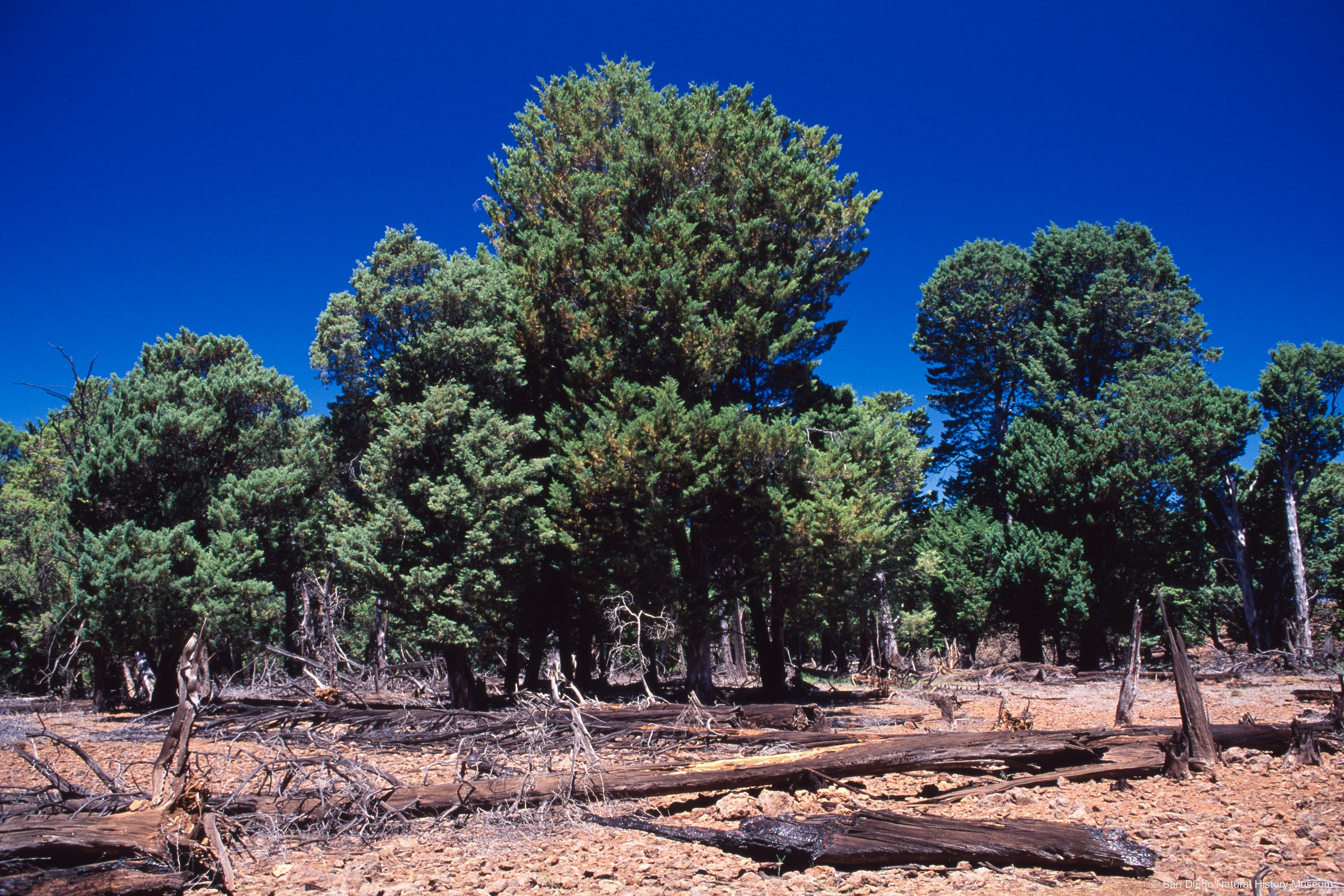 Five more endemic Isla Guadalupe birds have also been declared extinct, including the Guadalupe caracara, Guadalupe flicker, and Guadalupe Bewick’s wren. Their extinctions line up almost perfectly with the expansion of feral cats.

“Guadalupe is an ecological mess,” said Ezcurra, upon returning from the expedition. “Yet, exploring it gave us a new perspective, and hope for the conservation of the remaining biodiversity of this unique place… Guadalupe is a unique stage of the world's evolutionary theater. In it, the ecological play of survival and extinction, of conservation and devastation, can be seen in a painfully clear way, and with all its dramatic consequence. There are few places like that in the world.”

When push came to chevre

Subsequent expeditions to Isla Guadalupe, led by other conservation organizations from the U.S. and Mexico, soon followed. Everyone’s data on the diversity and damage, and their experiments showing the potential for recovery, paved the way for a strong restoration plan.

Ezcurra briefly left The Nat to work for Mexico’s National Institute of Ecology from 2003 to 2005. Armed with decades of research data (especially Moran’s book), he pushed the Mexican government towards fully protecting Isla Guadalupe. His political pressure was matched by GECI, which had already begun removing goats in 2002.

In 2005, success was in sight. Mexico declared Isla Guadalupe, its islets, and its surrounding waters a Biosphere Reserve to be managed by the National Commission of Natural Protected Areas (CONANP). In 2007, after a few lackluster attempts and continued pressure, the Mexican government and GECI successfully removed the feral goats once and for all. 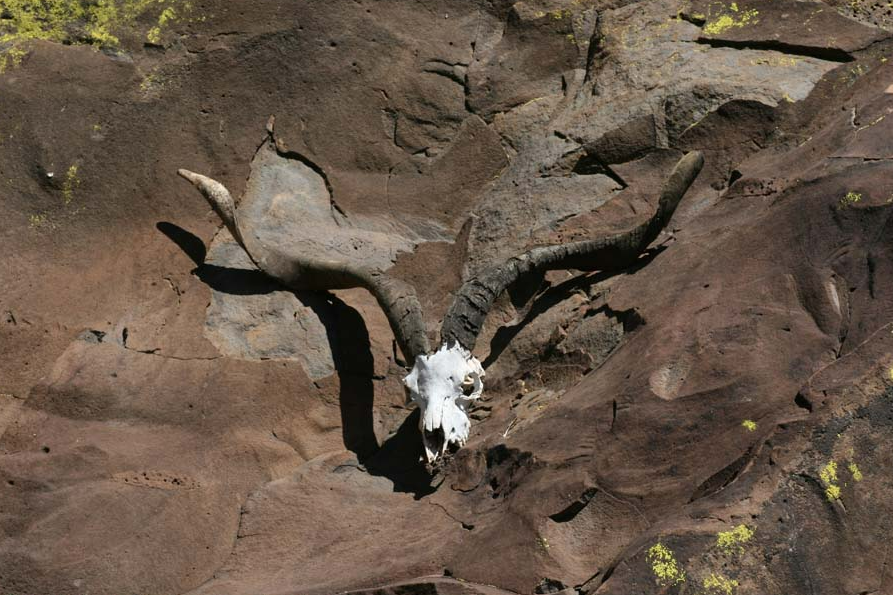 From getting data to getting our hands dirty

By 2010, there was a massive change to the flora of the island. Many of the endemic shrubs, perennials, and annuals had returned, two new native species were discovered, with more being described as recently as 2022. Several plants had sprung up which were never previously collected on Isla Guadalupe—even big shrubs! Somehow, the seeds or underground root systems of these species had held on for decades, waiting for the chance to grow again.

Throughout its history, one of The Nat’s guiding principles has been to provide the research data that made conservation possible. Our understandings of Isla Guadalupe’s ecosystems spanned more than 100 years, and it was our findings, along with the data of our Mexican colleagues, that made the case for restoring this gem of an island.

Today, we not only continue to provide the data necessary for successful conservation of the Californias, but we also prioritize and participate in boots-on-the-ground conservation work. To learn more about Isla Guadalupe and the other conservation research we’ve conducted in Baja California, stop by our 4th floor exhibition, Expedition Baja. 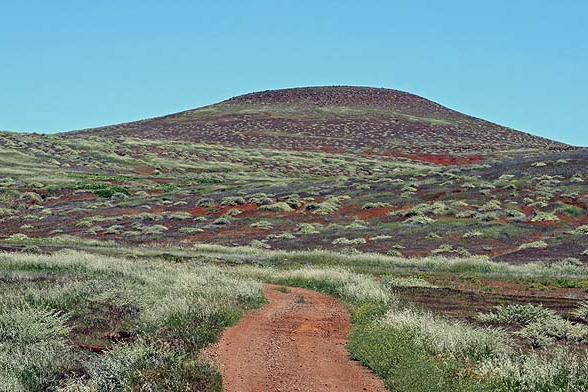 For a complete list of all known plant species on Guadalupe Island, click here. (Assembled by Jon Rebman and his team at The Nat)

Here's are a select few of the publications our staff and associates have published about Isla Guadalupe over the past 100 years:

On the urgency of conservation on Guadalupe Island, Mexico: is it a lost paradise? - 2003, Coauthored by Jon Rebman.

Discussion of the Flora of Guadalupe Island - 1965, Authored by Reid Moran.