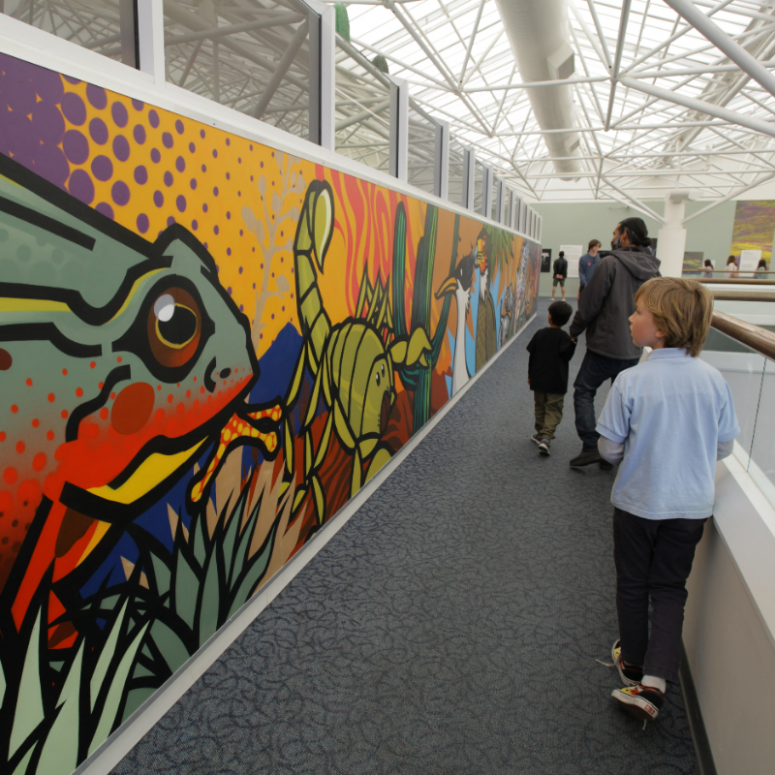 The exhibition opens Friday, May 27, which is also the launch of Nat at Night

SAN DIEGO—Beginning Memorial Day weekend, visitors can get a glimpse into the beautiful biodiversity of the Baja California Peninsula—right in Balboa Park—when The Nat debuts its newest, permanent exhibition.

Expedition Baja invites visitors to explore the Baja California Peninsula and follow researchers on their quest to conserve its wild beauty. Featuring museum specimens, immersive imagery, and stories about conservation work happening there, the exhibition brings to life one of the most incredible regions in the world.

The Baja California peninsula boasts many rare plants and animals that exist nowhere else on Earth. But, like southern California, it is also a victim of widespread habitat loss due to climate change, agriculture, development, and invasive species. The exhibition will increase awareness of how diverse the region is—from snow-capped mountains to remote desert islands—and the work we do to preserve it.

Expedition Baja is located in the new, 2,000-square-foot gallery on the top floor of The Nat, which was converted from staff office space during the pandemic shutdown.

Nature doesn’t stop at the border

The 775-mile-long Baja California Peninsula is part of The Nat’s mission area for biodiversity conservation. But it has not had a permanent presence in the Museum—until now.

The Museum has a long history of scientific expeditions into Mexico and collaboration with researchers in the region. This cooperative work has uncovered species new to science, helped with habitat preservation, and played an important role in conservation decisions on both sides of the border.

“Nature doesn’t stop at the border; in fact, humans are the only species that recognize political boundaries,” said Judy Gradwohl, The Nat’s president and CEO. “International collaboration is key to the future of this region and its remarkable biological diversity.”

While many of The Nat’s exhibitions and programs feature museum research and specimens, this is the first time that the scientists themselves take center stage in an exhibition.

From what they pack for field excursions to stories about the plants and animals they are working to conserve, Expedition Baja will bring visitors closer to the region’s wild places, but also to our team of researchers and the scientific process itself.

Expedition Baja is free for members and included with paid admission. Guests can pair their visit with films in the Subaru Giant Screen Experience. One of the films, Ocean Oasis, features the wildlife of the Gulf of California and the Baja California desert.

Baja-related programming will be offered throughout the year, including Nat Talks, youth programs, and resources for students and teachers.

Nat at Night also launches May 27

In addition to the public opening of Expedition Baja, May 27 is also the first day of the Museum's popular summer program, Nat at Night, which returns after a two-year hiatus.

For Nat at Night, the Museum stays open until 10 PM every Friday through September 2. Visitors can enjoy all exhibitions, participate in trivia on select evenings (starting in July), and visit the rooftop patio, which serves up amazing views, refreshments (beer, wine, and non-alcoholic drinks), and delicious small plates from local restaurant partner Wolf in the Woods.

Nat at Night is open to museum guests of all ages. Admission is half-price on Fridays after 4 PM, and free for members and Explorer passholders. Films are not included in the event (the last screening of the day will be at 4 PM).

Visitors can learn more, purchase tickets, or become a member at sdnat.org.

The San Diego Natural History Museum (The Nat) is one of California’s oldest and most respected cultural and scientific institutions. Founded in 1874 by a small group of naturalists, the Museum works to preserve and protect this amazing place we call home. The Museum is located at 1788 El Prado, San Diego, CA 92101 in Balboa Park. For more information, visit sdnat.org. To stay up to date on Museum news, follow The Nat on Instagram and Twitter and join the discussion on Facebook.

B-roll, images, and photo captions are available on Dropbox.

For additional information or to schedule an interview, please contact: