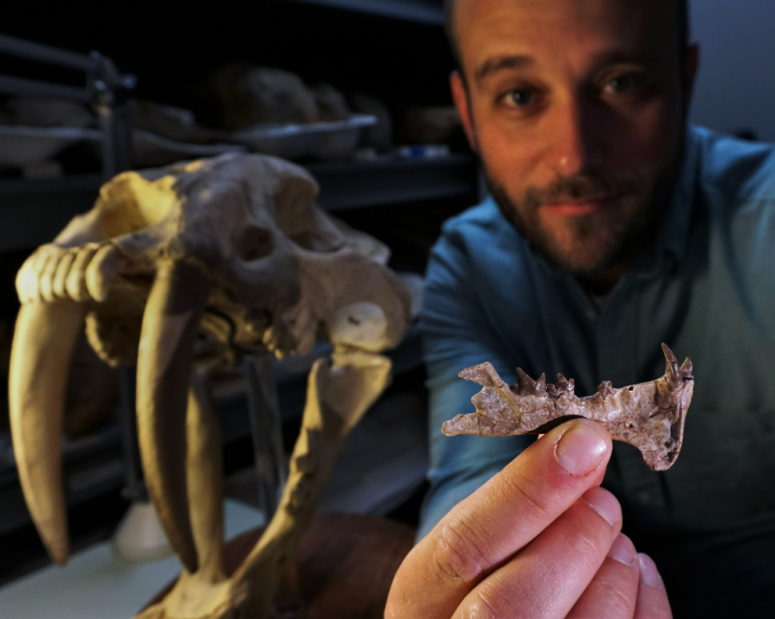 SAN DIEGO, Calif.—A new species of sabre-toothed, carnivorous mammal has been discovered in southern California, and was recently described by scientists from the University of Arizona and The San Diego Natural History Museum (The Nat) in the open-access journal, PeerJ.

The fossil, housed in The Nat’s paleontology collection, offers a window into what the Earth was like during the Eocene Period, more than 40 million years ago. The specimen includes a lower jaw and well-preserved teeth, giving us new information about the behavior and evolution of some of the first mammals to have an exclusively meat-based diet.

“Today the ability to eat an all-meat diet, also called hypercarnivory, isn’t uncommon. Tigers do it, polar bears can do it. If you have a house cat, you may even have a hypercarnivore at home. But 42 million years ago, mammals were only just figuring out how to survive on meat alone,” said Dr. Ashley Poust, postdoctoral researcher at The Nat. “One big advance was to evolve specialized teeth for slicing flesh—which is something we see in this newly described specimen.”

This early meat-eating predator is part of a mysterious group of animals called Machaeroidines. Now completely extinct, they were not closely related to today’s living carnivores. "We know so little about Machaeroidines, so every new discovery greatly expands our picture of them,” said coauthor Dr. Shawn Zack of the University of Arizona College of Medicine. “This relatively complete, well-preserved Diegoaelurus fossil is especially useful because the teeth let us infer the diet and start to understand how Machaeroidines are related to each other,” said Zack.

Zack, Poust, and their third coauthor Hugh Wagner, also from The Nat, named the predator Diegoaelurus vanvalkenburghae. The name honors San Diego County where the specimen was found and scientist Blaire Van Valkenburgh, past president of the Society of Vertebrate Paleontology, whose foundational work on the evolution of carnivores influenced this research.

D. vanvalkenburghae was about the size of a bobcat, but with a downturned bony chin to protect its long upper sabre teeth. It would have been a powerful and relatively new kind of hunter.

“Nothing like this had existed in mammals before,” said Poust. “A few mammal ancestors had long fangs, but Diegoaelurus and its few relatives represent the first catlike approach to an all-meat diet, with sabre-teeth in front and slicing scissor teeth called carnassials in the back. It’s a potent combination that several animal groups have independently evolved in the millions of years since.”

This animal and its relatives represent a sort of evolutionary experiment, a first stab at hypercarnivory—a lifestyle that is followed today by true cats. With only a handful of fossil specimens from Wyoming and Asia, the machaeroidines are so poorly understood that scientists weren’t even sure if there were multiple species living within the same time period. “This fossil finding shows that machaeroidines were more diverse than we thought,” says Zack. “We already knew there was a large form, Apataelurus, which lived in eastern Utah. Now we have this smaller form, and it lived at approximately the same time. It raises the possibility that there may more out there to find.”

In addition to this overlapping existence, Poust points out they may have coexisted with other sabre-toothed animals. “Diegoaleurus, though old, is the most recent of these machaeroidine predators. That puts it within striking distance of the time that the next cat-like animals arrived in North America, the nimravids or sabre-tooth false-cats,” he said. “Did these groups ever meet, or even compete for space and prey? We don’t know yet, but San Diego is proving to be a surprisingly important place for carnivore evolution.”

About the Santiago Formation

The fossil comes from San Diego County in southern California, at a location first discovered in the 1980s by a local 12-year-old boy. Since then, “Jeff’s Discovery Site” has become an important fossil bed within a larger group of rocks called the Santiago Formation. Fossils of an entire ecosystem have been discovered in these 42 millionyear-old rocks, painting a picture of a very different San Diego than the one we know today. Though largely inaccessible, these important fossil beds are occasionally exposed by construction projects and road expansions, allowing scientists from The Nat to keep digging for evidence of California’s ancient, tropical past.

“Not only was San Diego further south due to tectonic plate movements, but the Eocene was a wetter, warmer world,” said Poust. “The Santiago Formation fossils show us a forested, wet California where tiny rhinos, early tapirs, and strange sheep-like, herbivorous oreodonts grazed under trees while unusual primates and marsupials clung to the canopy above. This richness of prey species would have been a smorgasbord for Diegoaelurus, allowing it to live the life of a specialized hunter before most other mammals.”

The article “Diegoaelurus, a new machaeroidine (Oxyaenidae) from the Santiago Formation (late Uintan) of southern California and the relationships of Machaeroidinae, the oldest group of sabertooth mammals” is published in PeerJ.

About the 3D model

The jaw of the newly named meat-eater is available to view in 3D for free on the San Diego Natural History Museum’s website. To access this 3D model and view in your browser, click here.

The San Diego Natural History Museum (The Nat) is one of California’s oldest and most respected cultural and scientific institutions. Founded in 1874 by a small group of citizen scientists, the Museum works to preserve and protect this amazing place we call home. The Museum is located at 1788 El Prado, San Diego, CA 92101 in Balboa Park. For more information, call 877.946.7797 or visit sdnat.org. Follow The Nat on Twitter and Instagram and join the discussion on Facebook.