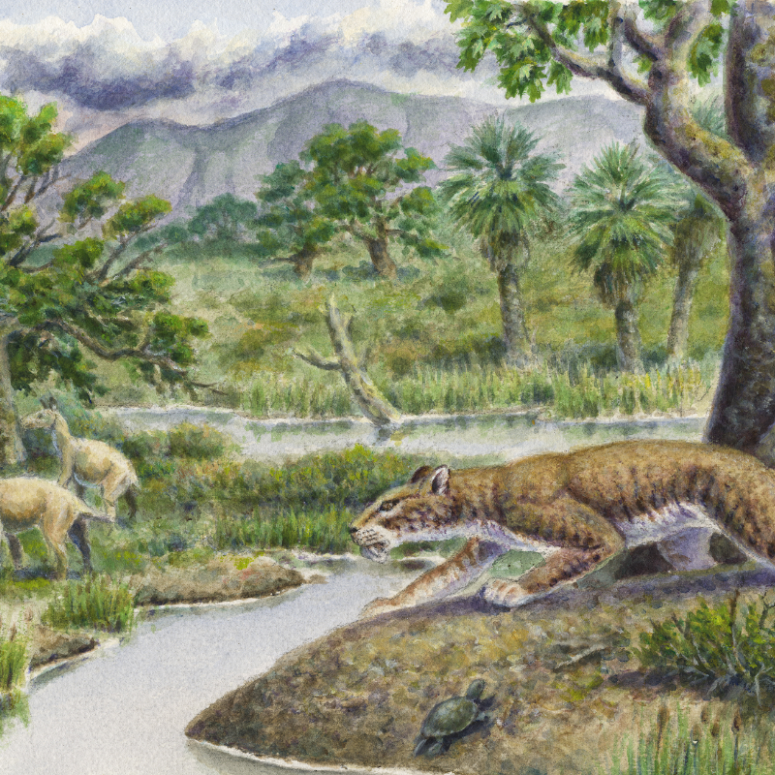 SAN DIEGO, Calif.—A sabre-toothed predator from 38 million years ago offers insight on the origins of today’s meat eaters. This new-to-science species was recently described by scientists from the U.S. and Japan in the journal Biology Letters.

The fossil, named Pangurban egiae, is the first of its kind in North America and is well-preserved enough to illuminate its family relationships. It was discovered in 1977 during construction work in the Scripps Ranch neighborhood of San Diego County, and since then has been housed in the paleontology collection at the San Diego Natural History Museum.

“The specimen has serrated slicing teeth which have important similarities to later predators,” said lead author Dr. Ashley Poust of the San Diego Natural History Museum. “The teeth tell us that close relatives of today’s living carnivores spread around the world earlier than we believed, and they diversified quickly when they reached new continents like North America.”

Pangurban’s time, 38 million years ago during the Eocene period, was one of climatic and biological disruption. Following a period called the ‘Middle Eocene climatic optimum’ when the earth was hotter than usual, the earth’s climate was changing, forests were breaking up, and ecosystems were in flux. During this time, Pangurban stalked the West Coast, showing that advanced carnivores were present far earlier than previously suspected.

Pangurban egiae was a cat-like predator, between a lynx and puma in size. It would have had long, blade-like canine teeth for hunting animals like camels, early horses, and the last North American primates.

Though very cat-like, Pangurban belonged to a different, extinct group of carnivores, the nimravids, or sabre-tooth false-cats. “Nimravids were the cats before cats,” said co-author Dr. Paul Z. Barrett of the University of Oregon. “The importance of nimravids lies in understanding how ecosystems can push carnivores to such extreme diets and body shapes,” said Barrett.

The ecosystems of this time period are poorly known on the West Coast, but discoveries made during construction and development projects in San Diego County are expanding our knowledge.

“The Eocene rocks of Southern California are proving to be an important window into the evolution of sabre-tooth carnivory,” said Poust. “It’s fortunate that the legal framework exists in California to preserve these fossils when they are found at construction sites. Institutions that house these rescued fossils, like The Nat, are safeguarding a valuable part of history.”

About the Rise of Hypercarnivory

Mammals with specialized all-meat diets had evolved before Pangurban, such as the small, primitive Diegoaelurus, also from the San Diego area and published earlier this year. But Pangurban’s discovery stands out because it is some of the earliest evidence of hypercarnivory in the direct relatives of modern meat-eating mammals. With Pangurban, scientists can better understand why and how this radical adaptation evolved and spread. For example, the fossil suggests that the decline of forests and primates in North America might have created opportunities for the carnivores to thrive.

“The rise of hypercarnivores against a backdrop of disappearing primates highlights how intertwined the evolutionary paths of major mammalian groups are,” said co-author Dr. Susumu Tomiya of Kyoto University. “This insight from the past raises the stakes for biodiversity conservation in the present. For example, if we lose two-thirds of the planet’s living primate species, which are currently threatened with extinction, it could change the course of evolution for other groups of animals, and thus have profound, cascading effects that last for millions of years.”

“The stressed ecosystems and movement of species 38 million years ago resemble changes happening today,” said Poust. “As environmental shifts multiply, some animals will see that as an opportunity. We can’t say which will be the long-term winners as ecosystems change, but the discovery of Pangurban reminds us how quickly invasion and adaptation can occur and the large role it has played in the history of life.”

The article “An Early Nimravid from California and the rise of hypercarnivorous mammals after the Middle Eocene climatic optimum” is published in Biology Letters.

The species name honors Japanese scientist and fossil mammal expert Dr. Naoko Egi. The genus name Pangurban refers to the namesake of a 9th century Irish poem, the cat Pangur Bán. Penned in an illuminated manuscript by a nameless monk, the poem compares the monk’s late night academic work to the cat’s evening hunt for mice. “Working on this specimen during the isolation of the pandemic brought to mind the old Irish poem,” said Poust. “I felt a connection to that monk and his cat, looking for truth in their own ways, on their own rocky coast so long ago.” The poet Seamus Heaney translated a version of the poem which captures the feeling:

With his unsheathed, perfect nails
Pangur springs, exults and kills.
When the longed-for, difficult
Answers come, I too exult.”

The San Diego Natural History Museum (The Nat) is one of California’s oldest and most respected cultural and scientific institutions. Founded in 1874 by a small group of citizen scientists, the Museum works to preserve and protect this amazing place we call home. The Museum is located at 1788 El Prado, San Diego, CA 92101 in Balboa Park. For more information, call 877.946.7797 or visit sdnat.org. Follow The Nat on Twitter and Instagram and join the discussion on Facebook.

Images and illustrations available on Dropbox.