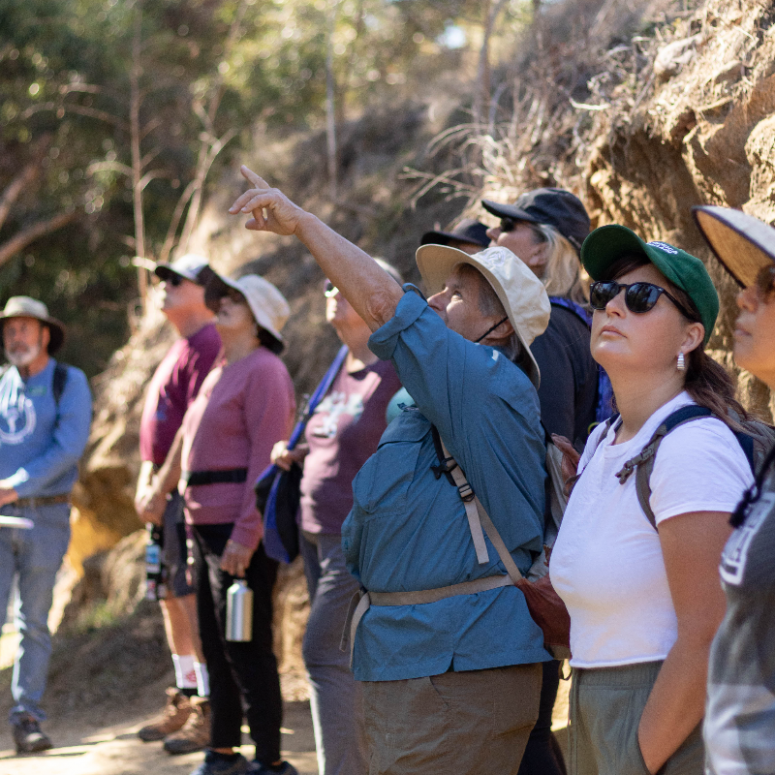 Museum-trained naturalists have offered free, guided hikes throughout county since 1973

SAN DIEGO, CA—Canyoneers from the San Diego Natural History Museum are celebrating a major milestone in 2023—their 50th anniversary. What started out as a group of volunteers leading walks through Florida Canyon has evolved into a county-wide program that has introduced tens of thousands of people to the wonder of nature in our region.

One of the few trail guide groups nationwide affiliated with a museum rather than a park or reserve, Canyoneers are volunteers who have had comprehensive training by museum scientists and other local experts on the natural history of our region.

The Canyoneers were founded in 1973 by Helen Chamlee, an educator and associate botanist at the Museum. She believed that direct contact with nature was the most effective way to educate the public about San Diego’s native habitat.

Fifty years later, the Canyoneers have:

We’re proud to offer an insider's view of nature in our region through the free hikes led by Canyoneers,” said The Nat’s President and CEO Judy Gradwohl. “For the past 50 years, Canyoneers have taken the Museum outside our walls, and introduced thousands of people to the marvels of San Diego County.”

Canyoneer History: From One Canyon to the Entire County

While Helen Chamlee was working at the Museum, she helped establish Florida Canyon as a native plant preserve. The educator and botanist spent hours at hearings and Council meetings advocating to keep this part of Balboa Park in its natural state—at the time, the canyon’s eastern slope was high, dense chaparral, sometimes called elfin forest.

In November 1973, the first 27 “Florida Canyoneers” began offering guided nature walks focused initially in Florida Canyon. Later, the group dropped “Florida” from their name and added hikes in other parks, coastal wetlands, the desert, and mountains.

The list of hikes they’re leading this spring is available at sdnat.org/canyoneers. A new schedule—for the September 2023-June 2024 season—will be released this summer. The program is made possible with support from dedicated volunteers and program partner Subaru of America.

“Partnering with The Nat supports our goals to safeguard resources for future generations and preserve natural spaces,” said Eric Park, zone retail marketing manager at Subaru of America. “The Canyoneers connect people with nature in our region, often inspiring a long-term appreciation of and love for our planet.”

Interested in being a Canyoneer? Joining this group as a volunteer trail guide offers a great opportunity to get outside, inspire people about nature in our region, and learn more about local wildlife from from museum scientists and other experts. The Nat begins accepting applications in April for new volunteer trainings that begin in fall 2023.

The San Diego Natural History Museum (The Nat) is one of California’s oldest and most respected cultural and scientific institutions. Founded in 1874 by a small group of citizen scientists, the Museum works to preserve and protect this amazing place we call home. The Museum is located at 1788 El Prado, San Diego, CA 92101 in Balboa Park and is open daily from 10 AM to 5 PM. For more information, call 877.946.7797 or visit sdnat.org. To stay up to date on Museum news, follow The Nat on Instagram and Twitter and join the discussion on Facebook.