Titanic: The Artifact Exhibition will be showing at theNAT for a limited engagement.

Tickets include all concurrent exhibitions and movies shown in the 3D Theater. Special discounts available for museum members, students, children, seniors, military and groups of 10 or more.

Don't Miss Titanic Films on the final days of the Exhibition! Included with paid Titanic or General Admission.

The Official Story of the 100 Year Journey 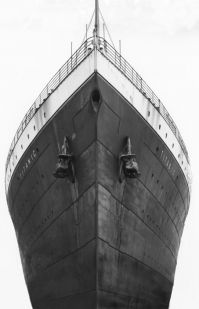 On April 15, 1912, Titanic, the world’s largest ship of its time, sank after colliding with an iceberg, claiming more than 1,500 lives and shaking the world’s confidence in the infallibility of modern technology. One hundred years later, Titanic: The Artifact Exhibition, which showcases 200 artifacts retrieved from the wreck site of Titanic, arrives at theNAT.

The story of the sinking is legendary; now experience the wonder and tragedy of the ill-fated “ship of dreams” on a journey through Titanic history.

Experience Titanic's fateful 1912 maiden voyage and take on the identity of a real passenger onboard Titanic as you explore magnificent re-creations of the Ship's interior. Discover how the 'unsinkable' Ship met its tragic end and connect with the passengers and crew, as you view haunting artifacts recovered from the wreck during the eight research and recovery expeditions conducted by RMS Titanic, Inc. since the Ship’s discovery in 1985.

RMS Titanic, Inc. has a singular purpose: to faithfully and respectfully preserve the memory of Titanic and of all who sailed with her. In all activities and events related to Titanic: The Artifact Exhibition, the San Diego Natural History Museum wishes to remember and honor those whose lives were lost due to the Titanic’s tragic sinking 100 years ago.

Want to stay up-to-date on everything Titanic?