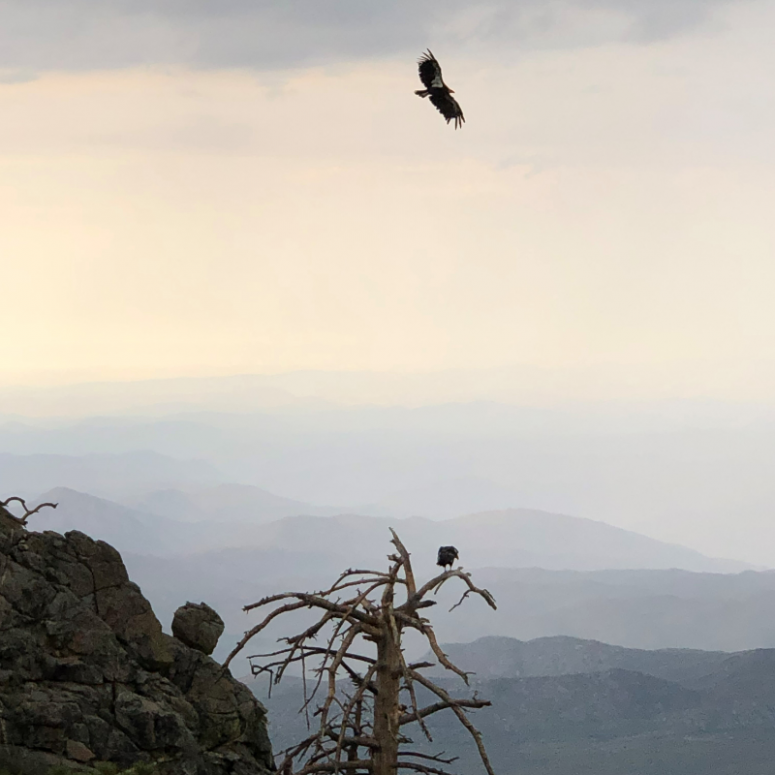 I was a peak bagger in my youth—hiking to the highest peaks I could access. Nothing made me happier than being above the tree line in the Sierra Nevada, except finding that rusty coffee can containing the summit register.

Heading north from Los Angeles on The 5, we regularly drove through Tejon Pass and the Grapevine, always scanning the horizon for condors. I can’t say for sure whether the occasional black speck in the sky was one of the last of the wild condors, but we always hoped we’d get a definitive sighting.

When I was invited to visit the Mexican project to restore condors to the Sierra San Pedro Mártir, the answer was, “what time do I need to be ready?” I snagged the last seat in the truck, joining a colleague and his family on a trip to the Baja Peninsula’s grandest mountain range.

It is about an eight-hour drive from San Diego to the Sierra San Pedro Mártir National Park headquarters. We rolled down the coast to Ensenada and, after a stop for seafood tacos, headed inland to the park.

The Sierra San Pedro Mártir is the highest range on the Peninsula and, at 10,157 feet, Picacho del Diablo is much higher than any peak in San Diego County. The Jeffrey and sugar pines and white firs made it seem like we'd been transported north to the Sierra Nevada. The two mountain ranges share some species despite the distance between them, but the Sierra San Pedro Mártir is home to many species found nowhere else on Earth. It is a prime example of a sky island—an isolated assemblage of species that can’t survive in, or migrate beyond, the surrounding lowlands.

If I were a condor, these high peaks are where I would want to live. I’d soar above the sheer cliffs and craggy, granite peaks shrouded in morning mist, and take in the views of the Pacific to the west and the Gulf of California to the east. The only signs of human activity are the national park’s headquarters, an astronomical observatory, and the condor project encampment.

We planned our visit to coincide with the annual health and radio transmitter check of the local condor population. This is when the scientists trap, check, and release as many individual birds as possible. It’s nerve-wracking work to capture and handle the birds without harm, and thrilling for visitors to see condors up close. The birds are briefly kept in a large, outdoor aviary, and when we arrived, there were 11 birds inside. Eight more were perched in trees nearby, waiting for their loved ones to be released. It was mind-blowing to see so many condors so close that we could easily read the numbers on their wing tags. There were almost too many of them!

The condor project staff were as remarkable as the animals they worked with. Headed by Juan Vargas Velazco and Catalina Porras Peña, the group was impressive for their teamwork, deep knowledge of the individual condors, and their ability to maintain a world-class program under isolated field conditions. Juan and Caty have been living at the field station for close to two decades—so dedicated are they to the condors that they rarely leave.

During our visit, they had to chainsaw a large tree that had fallen across the road, and spent ten hours putting out a small forest fire—both incidents resulted from frequent electrical storms at high elevation. Living well over 8,000 feet, Juan and Caty also deal with winter snow, sometimes three feet at a time. Their electrical generator, however, is mostly reserved for running lab equipment, and the closest supplies, food, and Wi-Fi are hours away.

Juan, Caty, the Mexican state and federal governments, and U.S. partners have good reason to be proud of the work being done up here. From the original three condors released in Baja California in 2002, the population has grown to around 40 individuals thanks to habitat protection, subsequent reintroductions, and wild and captive breeding. Today, the condor project team is seeing first-generation chicks coming of age. It’s thrilling to see these birds soaring over the Baja Peninsula once again.

Whether or not you are a bird lover, it is easy to be awed by the California condor. The largest native bird in North America, it is majestic in flight and has its own colorful, vulture charm up-close. We see wild condors today thanks to the breeding program initiated 35 years ago by a far-sighted coalition of government organizations and zoos. Juan and Caty’s continued stewardship and commitment ensures that a significant condor population soars over the peaks of Sierra San Pedro Mártir. We owe them gratitude for their many years of dedicated condor stewardship.

On Oct. 25 2022, we have a rare opportunity to hear an update directly from the condor project staff. Caty Porras will travel to Ensenada, Mexico (where there’s Wi-Fi!) to present a virtual Nat Talk on her team’s work, life among the peaks, and the future of Baja California’s condors. RSVP here. 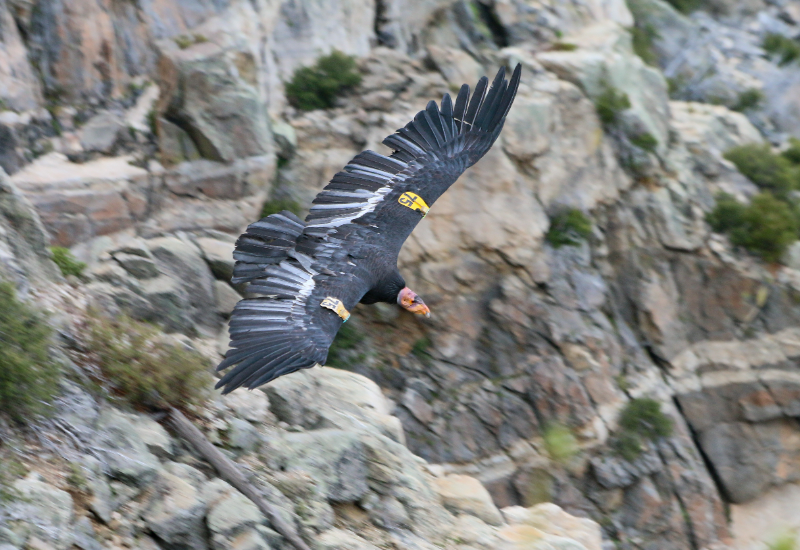 A majestic California condor soars among the peaks of the Sierra San Pedro Mártir. Photo by Caty Porras Peña. 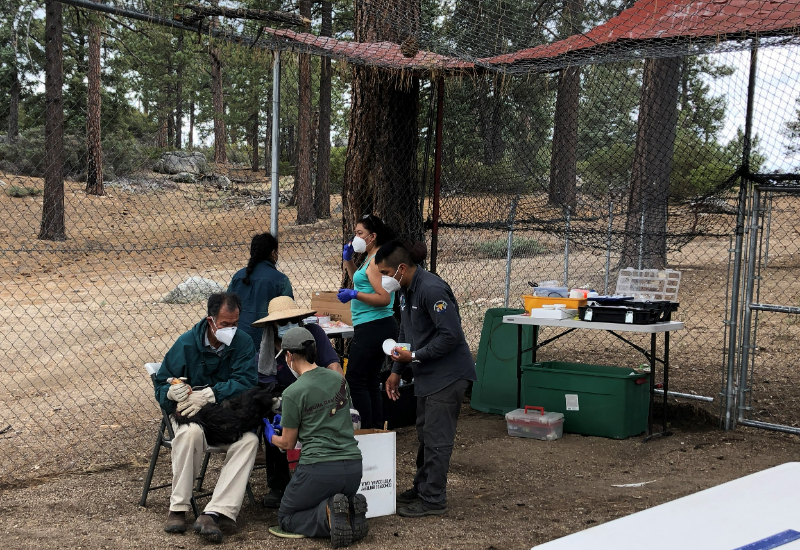 The condor team checks the health of a wild condor. Photo by Judy Gradwohl. 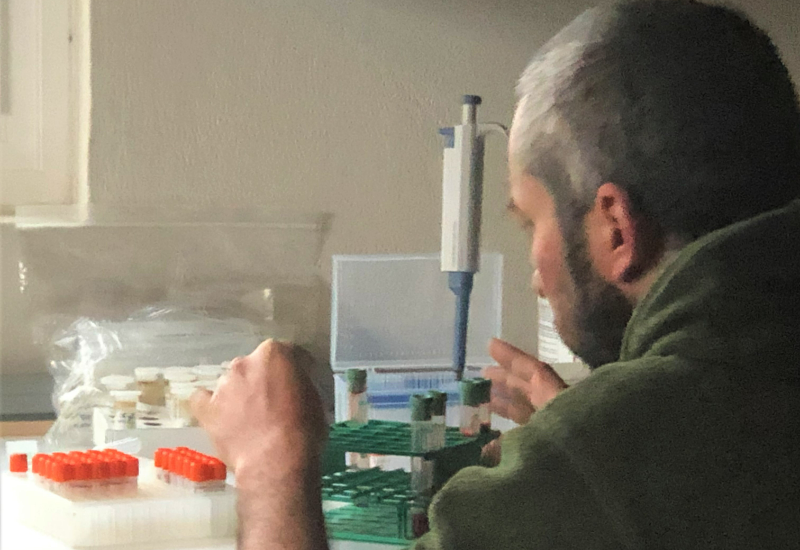 Processing samples from wild condors in the lab. Photo by Judy Gradwohl. 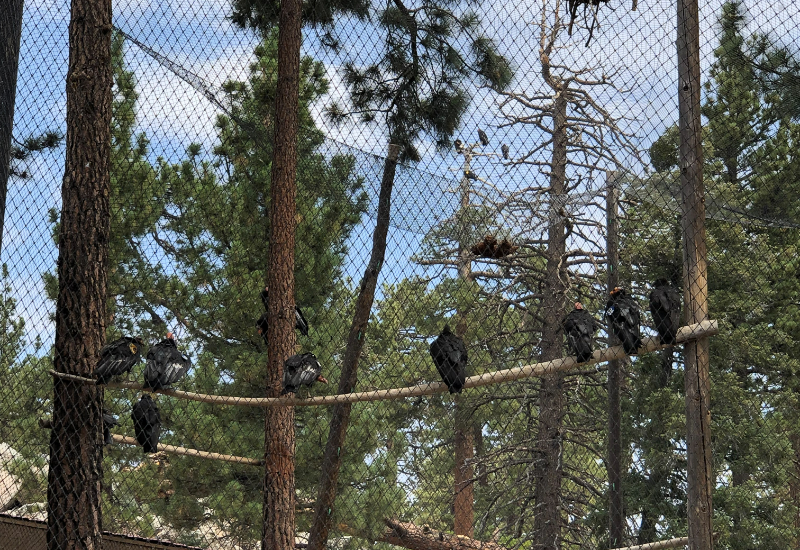 Aviary with birds about to be checked and re-released. Other wild condors are visible perched in trees nearby. Photo by Judy Gradwohl.


Posted by Judy Gradwohl, President and CEO on October 6, 2022