The Zone-tailed Hawk: Expanding its Nesting Range into California 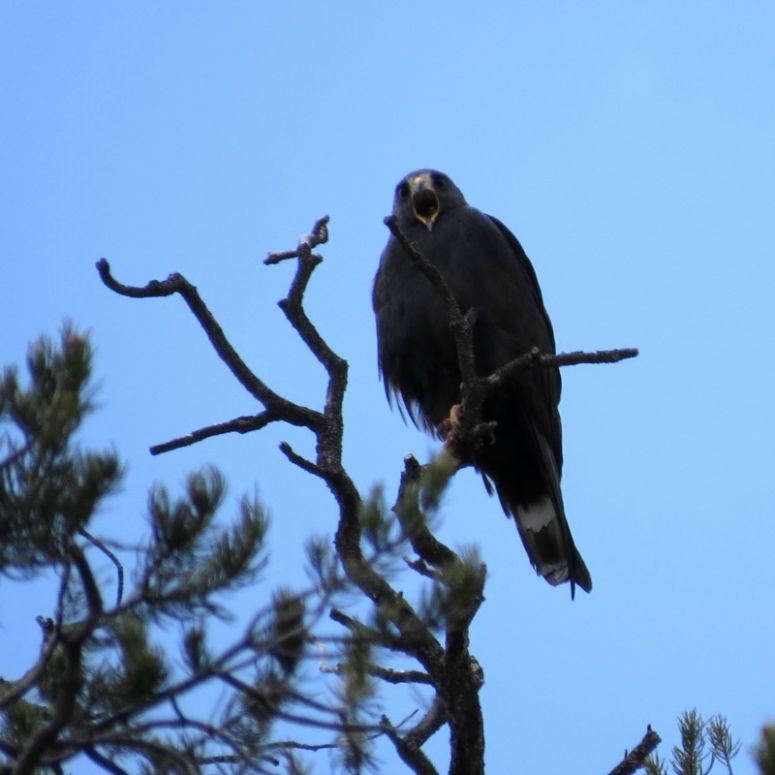 Over the last few years, researchers from the Museum’s Birds and Mammals Department have documented range shifts of numerous birds, including the expansion of the nesting range of the Zone-tailed Hawk (Buteo albonotatus) into California for the first time.

A nesting pair was discovered in April 2016 during field work at Cedar Canyon in the Providence Mountains, Mojave National Preserve. Another nest was found at the nearby Granite Mountains that same year. Both nests successfully fledged, and there has been re-nesting at both sites since then.

These discoveries reveal a substantial northward range expansion, as the raptor was formerly known to breed only southeast of California, including Baja California and Arizona, with only rare winter vagrants into this state. In Arizona, there are indications the Zone-tailed Hawk has been spreading generally northward over the last 50 years, and there have been increased sightings of the hawk in California over the last few decades.

The new nesting data for the Zone-tailed Hawk was collected during extensive work The Nat has been doing to replicate the historic surveys of Joseph Grinnell, who was the first director of the Museum of Vertebrate Zoology at Berkeley.

Beginning in 1904, Grinnell and his students and colleagues conducted extensive field work at over 700 locations in the western United States, particularly in California, documenting species of birds, reptiles, mammals, and amphibians. The information and specimens his group gathered have provided us with crucial baseline data prior to the surge in human population and habitat alterations. Grinnell’s collecting party conducted field work at Cedar Canyon in June 1938, and it was to this very same location that the researchers from the Nat returned to investigate any changes that may have occurred in the intervening ~80 years.

Scientists from The Nat have now wrapped up their Mojave Desert resurveys and have documented numerous important range shifts that are being analyzed in the broader context of climate warming and habitat change.

As an interesting sidelight to this story, the Zone-tailed Hawk may benefit from its close resemblance to the Turkey Vulture, particularly in the nature of its flight and general appearance. For this reason, scientists hypothesize that it may surprise prey animals that are accustomed to disregarding the presence of vultures, which feed on carrion.