The Making of the Griffin Pediment 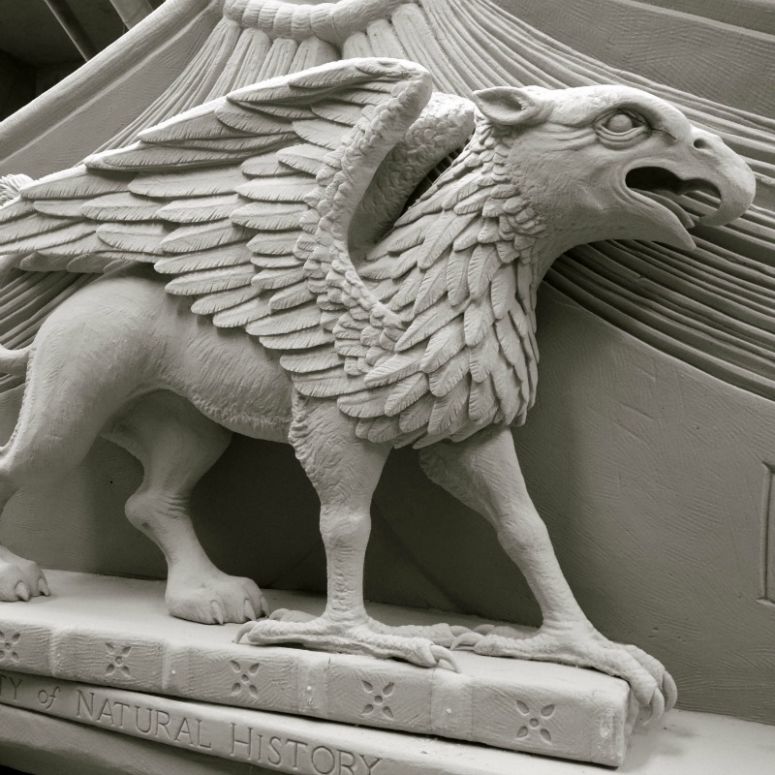 Have you noticed something new on the Museum’s mezzanine above the third floor? Early in the planning for Extraordinary Ideas from Ordinary People: A History of Citizen Science, our new permanent exhibition scheduled to open August 20, the decision was made to create a triangular architectural element called a pediment over the entry doors. The idea was to pay homage to the classical pediment from the original 1933 design over the south entrance of the Museum. It would also help to draw visitors up to the third floor Research Library, an area not previously open to the public. Exhibit Designer Michael Field suggested that the new pediment’s triangular shape be represented with an open book, facing downward. From this early idea, the concept grew and morphed as the exhibits team brainstormed various configurations. Finally, a consensus was reached to add the image of a griffin, which came from one of our rare books.

Exhibit Artists Jim Melli and Brian Gibson moved from rough sketches, to small models, to ever-increasing sized models as the brainstorming sessions progressed. The end product features a book with pages slightly curved with the large griffin in the center mounted on two horizontally-stacked narrow books. At this point, Malama Composites, the San Diego company which manufactures the bio-foam used to carve the pediment, delivered a generous stock of green foam sheets, and work began in earnest in the Museum’s fabrication shop. Soon there was a fine green powder-like material all over the shop floor as Jim and Brian cut and shaped the sheets.

This foam is a “green” product, both literally and figuratively, manufactured from plant material with zero emissions. The artists used their detailed drawings carefully done to scale to begin to carve out the general shape and aspect of the pediment. They sent a month carving and refining the sculpture of the pediment and griffin. As days went by, the griffin gained more and more realistic details such as finely finished feathers on the wings and carefully sculpted claws on the feet. Visitors to the shop marveled at the artistic skill displayed in this creation!

We decided the phrase “Historia Naturalis,” which is Latin for “natural history,” would be chiseled into the book pages, since that sums up the content of all the holdings in the Research Library, and also is the actual title for many of the books from the Rare Book Room. Many of our books from the 1500s and 1600s were in Latin since that was the language of scholars at the time. On the spine of one of the books on which the griffin stands is a bit more text: “San Diego Society of Natural History, 1874.” This celebrates the incorporation of the parent organization of the Museum in that year and commemorates the long legacy of our institution.

Finally, the day came when the carving of the entire object was finished. Next Jim and Brian applied a special epoxy resin to make the surface harder and more durable. Then they applied a base color of tan and dry-brushed on a lighter beige. Wherever there were low spots they retained the darker color, heightening the effect of depth and dimensionality. Additionally, a dark pigment mixed with water was spritzed over the whole sculpture, resulting in a randomly mottled surface, creating the effect of an old sculpture made of stone.

The final version of the pediment was delivered to the Atrium on February 22. Major donors to the new Eleanor and Jerome Navarra Special Collection Gallery, the home for Extraordinary Ideas, had the opportunity to be photographed in the Atrium standing next to the pediment on the next evening when the “topping-off” celebration occurred in the library construction area. On February 24, we began the elaborate procedure of lifting the pediment into place, three stories above the Atrium floor. Although the sculpture was not particularly heavy, given its large size it was still a challenge to lift it successfully into its final spot.

Now that installation is complete, people have commented that the pediment looks as if it has always been there. In fact, it has become hard to remember what that bare spot looked like before. We are so proud of the fact that our own staff not only designed this object, but carried out all the fabrication in house. It stands as a testament to the talent and creativity that comes to the surface when we work collaboratively and each person contributes their own ideas and talents to a group effort such as this!

We look forward to opening the newly remodeled library space with its beautiful new entrance on August 20.