The Hidden World of the Maritime Maya 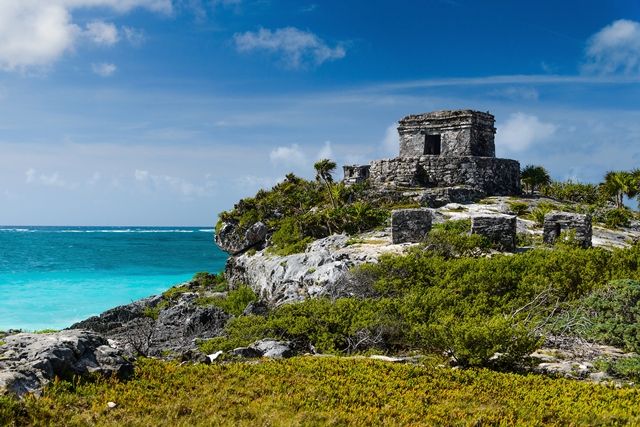 Maya civilization was among the greatest of the ancient New World. Their culture endured the span of Mesoamerican history – witnessing the rise and fall of Teotihuacan and surviving the expansion of the later Aztec Empire.

The Maya, emerging as early as the 9th century BC, never constituted an empire themselves. Rather, the Maya area – encompassing southeastern Mexico, all of Guatemala and Belize, and portions of Honduras and El Salvador – can be best characterized as a diverse political, social, and economic landscape once dominated by semi-independent polities. Divine kings ruled over civic-ceremonial centers and their peripheries, like those of famous Tikal and Copan, as well as presided over the complex shifting alliances that engaged and divided the world around them.

What provided cohesion for this constantly reconfigured mosaic? Maya peoples, across time and space, were essentially bound together by a pervasive and persistent shared ideology and a unique set of cultural traditions. Their ingenuity and contributions to human knowledge are legendary, and include true writing, place value-numeration, mathematics, astronomy, and calendrics. Many of these developments matured and flourished during the Classic Period.

The "collapse" of the Classic Period Maya of the southern lowlands is fixed in the popular imagination as the end of Maya civilization, but nothing could be further from truth. At the beginning of the 10th century AD, the majestic cities of Yucatan, to the north, rose to power and ushered in a new Maya era. This was a time of great internationalization across Mesoamerica – a development related to the rise of maritime commerce and interaction.

Who were these ancient Maya seafarers? It is believed that long-distance coastal trade was initially dominated by the so-called Putun Maya of the Gulf lowlands. Archaeologist J. Eric S. Thompson once referred to these shrewd and intrepid merchants as “the Phoenicians of the New World.” Throughout the Terminal and Post-Classic Maya periods, precious goods and commodities – including jade, pottery, cotton, obsidian, cacao, and salt – made their way along a coastline stretching from modern Veracruz to Honduras. The vessel of choice was the dugout canoe. These were not humble watercraft, but massive affairs. On Columbus’ fourth voyage, in 1502, his son describes a canoe measuring eight feet wide and 50 feet long, propelled by 25 paddlers and carrying both passengers and cargo.

Interestingly, the ancient Maya were not drawn to the sea in quite the same way that other Pre-Columbian peoples were. Their civilization was fueled by agriculture, and the more productive lands were found well inland. These areas also offered better protection from frequent hurricanes that would ravage the coast. Hence, the massive Maya centers of renown are located not along what we perceive as idyllic stretches of beach, but rather deep in the interior. It was not until certain social and economic push and pull factors emerged that Maya peoples turned their attention to the sea.

Although the latter part of Maya civilization was supported, in part, by maritime trade, not a single complete and well-preserved ocean-going canoe has been found. Post-Classic Maya iconography provides hints as to what these vessels may have looked like, but perhaps one lies undisturbed beneath the mud of some ancient harbor, waiting to be discovered. Fortunately for archaeologists, the maritime Maya left behind coastal ports centers, rich with exotic goods from across Mesoamerica. It is here, at once bustling and now abandoned outposts shrouded in mangrove, that the stories of these great traders will be told.

Dominique Rissolo serves as archaeologist and special projects coordinator for the Center of Interdisciplinary Science for Art, Architecture, and Archaeology (CISA3) at the University of California, San Diego. He has been studying Maya ritual cave use as well as ancient maritime trade and interaction along the Yucatan coast for more than 20 years, and his work is regularly featured in National Geographic. Don’t miss his NATtalk on September 23 (see calendar for details).

A version of this article appears on the National Oceanic and Atmospheric Administration website.