The Dinosaurs (or Lack Thereof) of Southern California 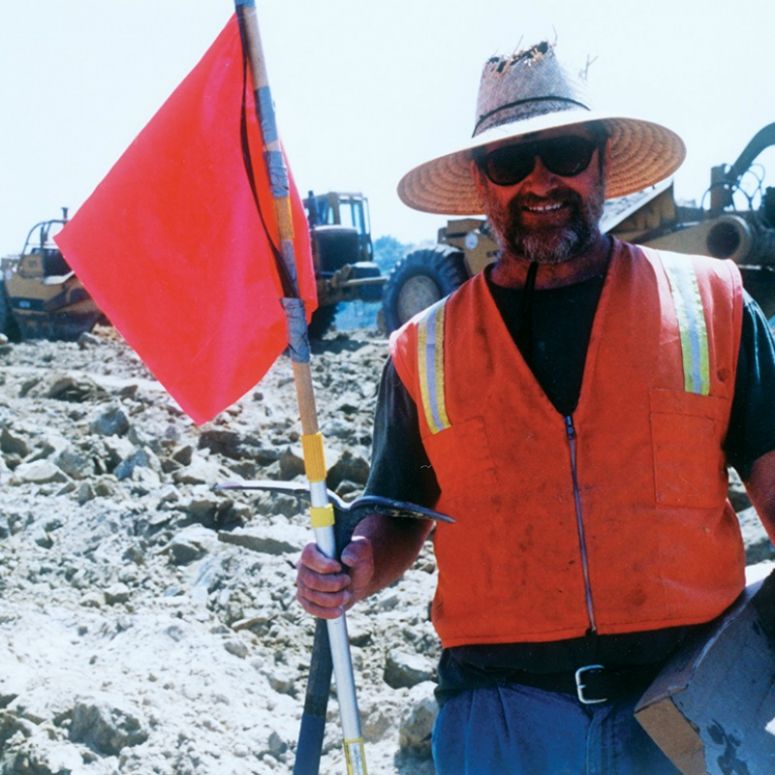 Brad Riney, a field paleontologist at the Museum, found his first dinosaur fossil in the La Jolla Bay area at age 13. A naturally curious and inquisitive kid, Brad grew up spending time outdoors. At the early age of 7 or 8, be began exploring the area around his Clairemont home, scouring the canyons looking to find deposits of shells from Eocene-age (~48 million years old) rock layers. He joined a club called the Southwest Fossileers and amassed big collections of fossil shells and bone fragments.

So even as a kid, while he was no stranger to finding fossils, Brad was understandably thrilled to come across a dinosaur fossil while looking for ammonites in the cliffs between La Jolla Shores and La Jolla Cove—an area that during the Cretaceous (~75 million years ago) was under the ocean.

"Two fragments were sticking out of the cliff. When I saw this, I knew it was bone. And I figured it was a dinosaur because it was in Cretaceous-age rock," said Riney.

These bones, which were very fragmented but still identifiable as neck vertebrae from a duck-billed dinosaur (hadrosaur), were described in a scientific paper and turned out to represent the first discovery of dinosaur remains in San Diego County.

That was 1967. The fossils are now on display in Fossil Mysteries and Brad is the most seasoned field paleontologist within our PaleoServices division, a unique fee-for-service arm of the Museum that handles paleontological mitigation for developers and land management agencies.

Finding dinosaur fossils is not something even veteran paleontologists experience every day. Our crews find fossils on about half of the job sites they work, but they simply don’t encounter many dinosaurs here in southern California. It’s not to say these beasts didn’t roam the area—surely they did—but the circumstances for the preservation of their remains were not ideal here.

In order for organic materials, like dinosaur bones, to be preserved, they need to be covered quickly by sediment—before they are scavenged by other animals or scattered by the elements. Riney explains, "The rate of sediment deposition needs to be greater than the rate of sediment removal. Then there’s a greater chance of preservation." In addition, once buried, the rocks containing fossil remains need to remain buried and not get eroded away during subsequent geologic periods. And in the case of dinosaurs, there also needs to be the right environmental and ecological conditions to support dinosaur communities. Dinosaurs were terrestrial animals that lived in a variety of habitats from the coast to upland areas. They did not live in the sea.

Here in southern California a perfect storm of circumstances have conspired to greatly reduce the chances of finding dinosaurs. For example, during the Cretaceous, the region was tectonically active with a narrow coastal plain backed by steep-sided mountains that provided limited habitats for dinosaurs. Subsequent erosion removed virtually all traces of Cretaceous-age terrestrial sediments, but left extensive deposits of Cretaceous-age marine sediments.

So that means in our area of southern California, fossils that have been preserved—such as the ones found by Riney at age 13—were likely animals that had been flushed out into the ocean after they died, quickly sinking to the bottom of the sea and being covered by mud, getting preserved in marine deposits. In fact, a different dinosaur he found in Carlsbad in 1985—which turned out to include the back legs, pelvic region, front limbs, dermal armor, and teeth of an armored dinosaur (ankylosaur)—had become a natural reef on an otherwise barren mud sea floor. This carcass had likely washed into the ocean, settled on the bottom, and become a habitat for marine organisms. There were even fossil oysters still attached to some of the ankylosaur bones. Fossil oysters were also found on a hadrosaur femur Brad discovered in Carlsbad in 1983 and fossil clam shells were found adjacent to a string of hadrosaur vertebrae he discovered in Carlsbad in 1984. All these Riney dinosaur finds are currently on display in Fossil Mysteries.

So, yes, we had dinosaurs roaming SoCal. We just don’t find many of them because what we have here in San Diego is limited to whatever individuals floated into the ocean somewhat intact and covered relatively quickly by sediment.

"There may have been these animals, but preservation was just not as ideal. We probably had a huge diversity that no one will ever know about," explains Riney. But it’s incredible to imagine, isn’t it?