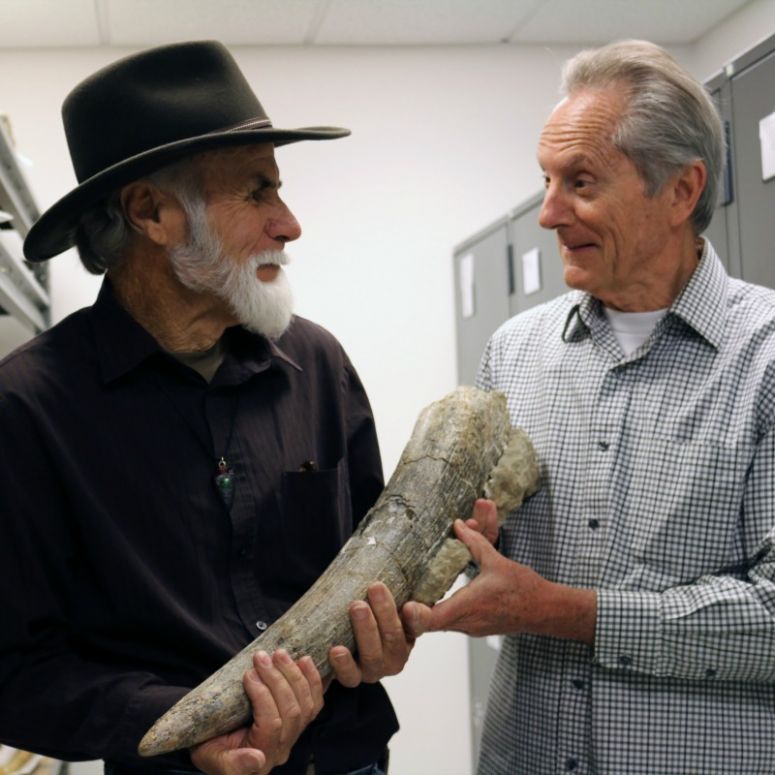 In February 2017, the San Diego Natural History Museum received word that a manuscript written by staff paleontologists and outside colleagues about the discovery of mastodon fossils showing signs of human activity had been accepted for publication in the scientific journal Nature.

The 130,000-year-old fossil remains were discovered in November 1992 and excavated over the next 5 months by Museum paleontologists at a freeway expansion project site in San Diego (learn more about the discovery here). The discovery (named the Cerutti Mastodon site after Richard Cerutti who found it) consisted of sharply broken mastodon fossils found alongside 5 large stones that appeared to have been used as hammers and anvils. Research into the site occurred over several decades from 1993 to 2017 and involved a multi-disciplinary team of respected scientists from the US and Australia.

If interpreted correctly, the Cerutti Mastodon site becomes the oldest archaeological site in the Americas, pushing back the record of early humans on this continent by more than 100,000 years. Folks knew it was a bold claim, one that would be received with extreme skepticism by many.

“As scientists, we seek explanations that best fit rigorous evidence, even if they conflict with previous thinking,” said Dr. Tom Deméré, curator of paleontology at the Museum and one of the study’s authors.

As expected, the April 26 announcement—which coincided with the date the paper was published in Nature—garnered widespread media coverage and stirred dialog within the scientific community. A selection of some of this week-of coverage is included below. In addition there have been several more formal critiques of the published study that appeared several months later in scientific outlets. A selection of these are also listed below, along with the responses by the original authors. Some have been supportive and consider the hypothesis compelling and one that should not be ruled out. Others have dismissed it as questionable science or outlined why various interpretations of evidence are wrong.

The authors were not surprised.

“I was a strong critic when I first looked at the evidence and said ‘I can’t believe this is really here,’ but it is and it’s shocking,” said archeologist and lead author Dr. Steve Holen, referring to the moment in 2008 when he first examined the Cerutti Mastodon site specimens. As the April 2017 publication date approached, Dr. Holen added, “We’re expecting pushback and expect people to be critical, we want people to be critical.”

While acknowledging that it takes a huge amount of evidence to overturn current thinking, the authors of the paper also hoped there would be more openness and discussion.

“Healthy skepticism is the foundation of good science, and the publication of this discovery is the beginning of a scientific debate, which I welcome and encourage,” said Deméré. “What I didn’t expect was the reluctance of scientists to engage in a two-way conversation to objectively evaluate our hypothesis.”

More recent articles, published online in scientific journals like Paleo America and Nature, consist of critiques by archaeologists who claim the Cerutti Mastodon evidence is not enough. These articles were published alongside responses from the manuscript’s original authors. One article in Paleo America is supportive of the hypothesis. These articles are generating additional discourse and media attention.

According to Deméré, all of the published comments utilize evaluations from afar without actual examination of the specimens or discussions with the team of researchers who worked on the discovery for decades. “We hoped that the publication of our findings would spur more meaningful, evidence-based conversations. So far, the academic debate has not been based on direct observation, but rather on long-distance interpretations of our data,” he said.

Moreover, the alternative hypotheses that have been presented—ranging from fluvial/flood processes, trampling by other large mammals, sediment compaction and weight, or damage from construction equipment—simply do not account for all evidence presented.

“By ignoring the most important bone and stone evidence, the commenters have discarded from their analyses precisely those features that are individually and collectively least likely to have been caused by non-cultural processes,” said Deméré.

Another approach in these published reactions is invoking the issue of equifinality—in which multiple possible scenarios may be responsible for producing a given outcome. In the case of the Cerutti Mastodon site, the issue of equifinality has been raised to emphasize that it is one thing to show that broken bones and modified rocks could have been produced by people, but it is quite another to show that people, and people alone, could have produced those modifications.

“The commenters are demanding unequivocal proof of human agency,” explained Dr. Dan Fisher, professor of paleontology at the University of Michigan and one of the authors on the original paper. “This is an unreasonable requirement—having to define a priori what evidence must be present at a site to qualify as acceptable grounds for inferring human presence is largely a construct of a certain faction of the archaeological community.”

In other words, insisting that they alone know what evidence is sufficient and on what grounds we should base our arguments is largely the problem, according to the Cerutti Mastodon team.

“No site is perfect, but by being aware of what evidence we have to work with and what we don’t, we can still develop robust and parsimonious explanations of causation,” Fisher continued. “Demanding proof beyond any doubt—rather than beyond a reasonable doubt—is an unrealistic standard.”

For example, it would have been ideal if human remains or even flaked stones tools were found at the Cerutti Mastodon site, but none were. However, a majority of archaeological sites lack human remains, and the absence of flaked stone tools at a site does not necessarily mean an absence of humans. In proposing that the Cerutti Mastodon site was a bone processing site—not a meat butchering site or a campsite—the authors suggest that only expedient tools in the form of cobble hammers and anvils were required to break bones and molars into smaller pieces that could be as raw material for other needs, or to harvest marrow.

Deméré admits that, “One site does not a new paradigm make.” But he adds, “We think the evidence from the Cerutti Mastodon site is really compelling, and we encourage the scientific community to reconsider the current paradigm and to attempt to replicate this find by looking in places that may have previously been written off simply because they were thought to be too old.”

Broken Bones and Hammerstones at the Cerutti Mastodon Site: A Reply to Haynes | PaleoAmerica| November 21, 2017