Q&A with Wildlife Biologist Drew (a.k.a. The Batman) Stokes 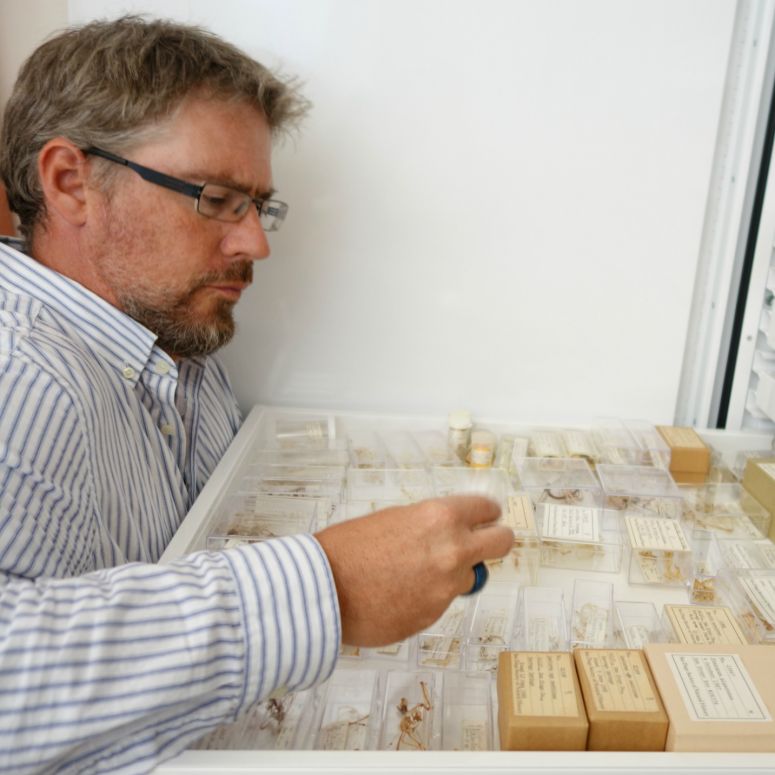 Drew Stokes is a veteran wildlife biologist at the San Diego Natural History Museum. He has almost 20 years of experience researching, preserving the livelihood, and physically handling all species of bats in southern California. After acquiring a bachelor’s degree in biology with an emphasis in zoology from San Diego State University, Drew dedicated his life to protecting this misunderstood taxa and teaching everyone how we can live in harmony with bats, instead of in fear. Whether it’s listening to the echolocation sounds that bats produce or hiking miles through mountains and exploring abandoned mines, Stokes does what it takes to ensure the quality of life is maintained for these fascinating creatures of the night.

Q: What, specifically, do you study about bats and why?

A: I study the history and ecology of bats, but my job at theNAT primarily focuses on management in conservation. What that means is when our services are contracted by either private entities or government organizations, I am responsible for informing property owners that they have bats occupying a section of their estate. I help them become aware of their presence and teach them how to peacefully coexist with animals on their property. I take pride in the fact that the research I conduct saves bats’ lives while simultaneously educating the public about the species.

Q: How did you become interested in this subject? Why bats?

A: As a boy, I was always fascinated with reptiles and amphibians, but my true attraction was to bats. One day in second grade, I was outside playing during recess and I found a live bat on the playground and decided to take it home with me as a pet. Being able to see and feel the texture of the bats wings up close was incredible. This was not only my first real encounter with a bat, but is most likely what encouraged me to turn the study of bats into my career.

A: On any given day, I can be found researching bats in my office or in the field. Not too long ago, I drove near the Cleveland National Forest and hiked to a remote area where an abandoned mine was located. Outside of the mine, I set up multiple electronic location devices in order to record the echolocation sonograms that bats produce. I study these high pitch frequencies in order to identify what species of bats live in the mine. The information I gather is then used to inform bat enthusiasts and property owners about the bats inhabiting the mine.

Q: What kind of bats live in our region?

A: San Diegans are likely to see a few different bats in the region. The Big Brown Bat can be occasionally spotted at night in both suburban and rural areas—typically foraging around trees as they hunt for insects. For a more specific destination for bat watching, the Big Brown Bat, Mexican Free-Tailed Bat, and Canyon Bat can be observed foraging in the skies at sunset near the old mission dam in Mission Trails Regional Park.

Q: Why are bats nocturnal?

A: Bats have been called “the creatures of the night” because birds dominate the sky during the day. Birds are basically faster and more capable fliers than most bats. Bats simply can’t compete against birds when hunting for food, and several predatory types of birds would easily capture and eat bats. As a result, bats evolved to seek their prey at night.

Q: What is the oldest bat specimen in the museum's research collection?

A: One thing a lot people don’t realize is how vast our research collections are at theNAT. We have more than 7.4 million specimens of various taxa that have acted and continue to act as viable research tools for scientists, students, and enthusiasts around the globe. The oldest bat in our collection is a California Leaf-Nosed Bat which was collected by Frank Stevens on July 9, 1885 in Riverside, California.

Want to learn more about bats? Drew dispels commonly adopted myths about these misunderstood creatures in this blog post.