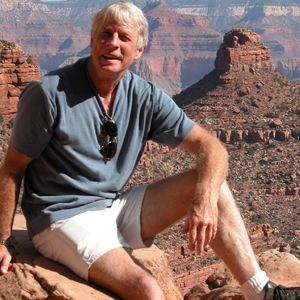 Soames Summerhays is a British-born oceanic adventurer who has produced and directed several award-winning films that are a must-see when visiting theNAT. For more than 30 years, Summerhays has literally traveled from one side of the planet to the other while documenting the natural world and, as an interpreter of science, paints the bigger picture of nature’s processes for all to see. We discussed with Summerhays how he first got into oceanography, the challenges that he has faced while filming, and how exploring the world has led to the creation of his new groundbreaking film A Reef Reborn 3D.

Q: How and when did you become interested in film? Why our oceans?

A: I have always been fascinated by nature and the 3D giant screen theater has the power to immerse audiences so they can share in the visceral experience of actually being there. While spear fishing in the Mediterranean during my teens, I realized the negative impacts we could impose on ocean ecosystems. This experience fired my passion in marine conservation leading, at first, to a B.S. in Biology and, subsequently, to postgraduate studies in oceanography. Over the course of a decade I led more than 100 expeditions from pole to pole in all oceans studying a wide range of marine ecosystems that confirmed my original observations in the Mediterranean. Ultimately, it led to working with a team on the Great Barrier Reef, Australia, to establish the first managed region in the Capricorn Bunker group at the southern end of the Great Barrier Reef Marine Park.

Q: Out of all the places in the world to film, why Cabo Pulmo?

A: I came across this incredible story when Dr. Exequiel Ezcurra, the director of the University of California Institute for Mexico and the United States (UC MEXUS), informed me that there had been an astounding 463% increase in biomass at Cabo Pulmo. This powerful story about a community responsible for its recovery perfectly illustrated what can be accomplished when a goal is shared amongst many. After Visiting Cabo Pulmo, I was entranced by its beauty, and knew it was a story that had to be told.

Q: What is the primary objective of creating A Reef Reborn 3D?

A: First is to share with audiences on an international level the amazing story about the extraordinary community in Cabo Pulmo and what they accomplished. Secondly, I want to create a program similar to my previous film Ocean Oasis, which allows schools and communities across the world to become educated about marine wild life, and how they can implement these strategies in their own neighborhood.

Q: What was theNAT’s involvement in this film?

A: Ever since 1996, when I first pitched my idea for creating Ocean Oasis to Dr. Michael Hager, the CEO and president of the Museum, he and the rest of the Museum were on board. Mick’s role as executive producer made Ocean Oasis become a reality. Now, more than 14 years later, theNAT has once again supported our efforts by serving as the fiscal sponsor to bring A Reef Reborn 3D to life.

Q: I understand you’re trained as a biologist and have participated in and led many expeditions. Can you tell me more about this and what you studied?

A: My formal studies during my time in university were quite a long time ago, and while I do stay up to date on recent literature in regards the ecosystem while filming, my numerous travels gave me the true insight that I needed to begin my journey toward filming. By actually living at the Galapagos Islands, I witnessed the islands’ coastal ecosystems deteriorate to an unrecognizable state. Each time I traveled to a new part of the world I rediscover the commonality to the struggles that these ecosystems face.

Q: What other films have you produced? Do you have a favorite?

A: My work for the Australian government on the Great Barrier Reef is on the top of my list because it’s a prime example on a large scale of the various impacts of humans on marine ecosystems, but I would have to say that my newest film A Reef Reborn 3D is my favorite—not just because it’s new, but also because of how much potential it has. Educational modules for the film are available for schools, NGOs (non-governmental organizations), and programs related to terrestrial and marine conservation.

Q: What was the biggest obstacle while creating this film?

A: Your idea is only a dream until you can find people who believe in what you’re trying to accomplish. However, even when you find people who will help you get started, nature only provides you with extremely limited windows of opportunity to capture its beauty. During production of natural history films adverse conditions are typical. We endured two hurricanes, with consequent powerful winds and turbid waters.  El Nino conditions persisted during both years of filming. Some sequences we planned to film never transpired during that period while others we had not planned fortuitously presented themselves providing a rich tapestry of material to complete the story.

Q: What do you want audiences to take from A Reef Reborn 3D after leaving the theater?

A: I want people to leave the theater inspired and motivated by this remarkable story of nature’s irrepressible ability to heal itself… if we give it a chance. The film illustrates the story of a community that has done just that, and by so-doing has helped heal itself.