Pages from the Past: Charles Russell Orcutt 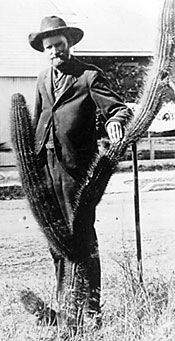 The pages of history of this Museum are full of colorful characters, and none more so than Charles R. Orcutt, the quintessential citizen scientist, collector, and entrepreneur. Born in Vermont in 1864, Orcutt was a self-educated man who moved with his family to San Diego and immediately began exploring the area with his father, who was an early horticulturalist and owned a local nursery.

In 1882, Charles accompanied his father and scientist Charles Parry on a collecting trip to Ensenada in Baja California. After that grand adventure, Orcutt was hooked. His natural history travels throughout his lifetime took him on numerous adventures not only in Baja California, but the entire area of southern California, mainland Mexico, Central America, and finally to the Caribbean, including Jamaica and Haiti. He was particularly interested in collecting and learning about new cactus species, which earned him the nickname of “The Cactus Man.”

He also worked tirelessly trying to establish many local serial publications, ranging from his West American Scientist to a myriad of other titles including Cactography: All About Cacti—over 40 publications in all.

Orcutt participated in the early founding of the San Diego Society of Natural History, the parent organization of our Museum. Orcutt was elected a life member in 1885. An eccentric man, he was eager to support the idea of the Museum, but very protective of his own vision for the form that this Museum should take, and had difficulties compromising with other early founders. However, he did end up donating many specimens to our botany, marine invertebrate, paleontology, and herpetology collections. Over the years Orcutt collected at least 45 new taxa, including 15 plant species and one genus that were named in his honor. Many plant names exist today with the specific epithet of orcuttii as a reminder of his dogged collecting in our study area.

Some of the descendants of Charles Orcutt still live in the San Diego area, including the George and Lonnie Muenkel family and the Bill Orcutt family. Last summer, several generations of family members came to the research floor of the Museum for a specially arranged behind-the-scenes tour of each science department. Curators and collection managers had pulled specimens out of the collections so that family members could look at the original labels and hand-written notes made by Charles Orcutt and appreciate the work he had accomplished in his lifetime. Who knows—it is possible that some of the youngest members of the family may be inspired to follow in the footsteps of their intrepid relative!