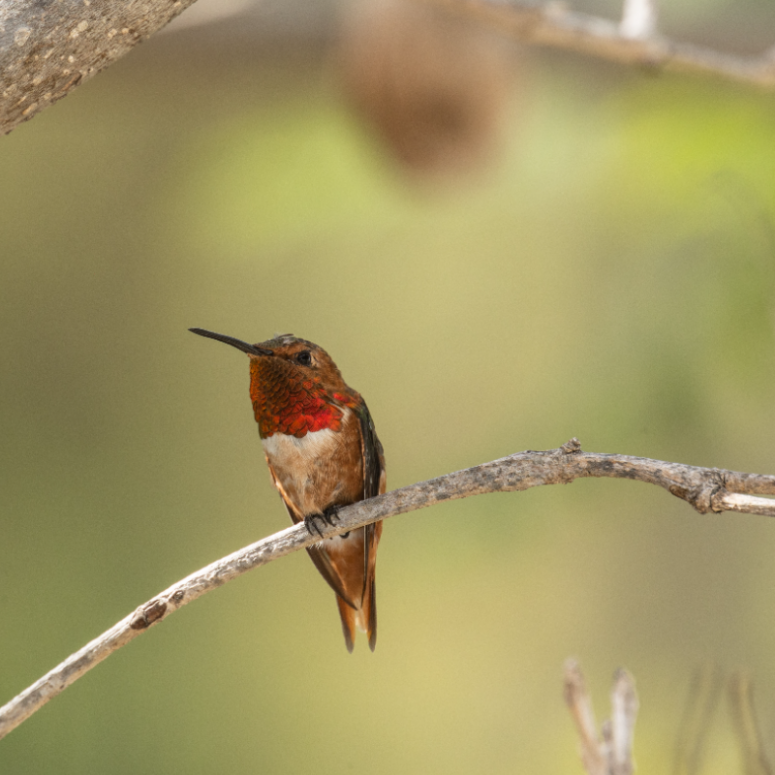 My office mate is a bit of a jerk and a major source of drama, but he has been a welcome companion through the pandemic. Buster has been hanging around my nectar feeders for a while, but it wasn’t until the San Diego Natural History Museum sent us home to work that I realized Buster has likely been spending more time at my house than I have.

I received an oriole feeder as a present. For a while it was like one of Edward Hicks’ Peaceable Kingdom paintings, with Anna’s, Rufus, and Allen’s hummingbirds cycling through, and later in the season, the flashy hooded orioles. Then Buster, a male Allen’s showed up.

As an ornithologist, I knew that sometimes the smallest species are the most pugnacious, but this one took aggression to a new level. Buster—what other name could I give the little guy with anger management issues—seemed so frantic to guard the feeder that I added a hummingbird feeder thinking he might refocus his attention.

Buster has different levels of anger: his most mild is a buzzing call, which he has the audacity to direct toward me if I venture out onto the deck in daylight. He can add physical intimidation by puffing up his feathers and fanning his gorget—the iridescent patch around his face, which seems to work on other small hummingbirds. He flies aggressively past larger birds, and DEFCON 4 is a dive bomb directed toward intruders, while buzzing angrily. Sometimes this will dislodge much larger birds from the feeder, but most often he is ignored.

With the addition of another feeder, Buster’s territory got bigger, and he had more motivation to chase the other birds away. Plus, he showed a clear preference for the oriole feeder, which has more perch space and slightly larger feeding holes. Worried that Buster was spending more time guarding than eating, I added another oriole feeder. My hopes that he would find three feeders too much to defend were dashed. I was already buying white sugar in 10-pound bags like a crazy lady, so I stopped at three feeders.

Like many houses in San Diego, mine is on a slope leading to a canyon, so the large jacaranda tree in my yard has its canopy at eye level with my windows, giving a marvelous treehouse effect, and making the feeder drama unavoidable. I try to give my full attention to Zoom meetings, but after almost 16 months of working at home I have been sucked into nature’s office politics.

Migratory hooded orioles visit the feeders as well, and the first arrivals are the cartoonish adult males. They are followed by females, then last year’s birds—still in immature plumage, but not too young to hang out and cause trouble. The adult orioles chase them off with angry calls and aggressive lunges with open bills. When the year’s young hatch they crowd the feeder trying to sip from the same hole, knocking each other off, even though there are other perfectly good holes and another feeder with the same nectar.

Buster’s aggression extends to seed- and insect-eating birds when they happen upon the feeders. House finches try mightily, but can’t open their thick bills in the small holes. The juveniles are downright comical, but I admire their persistence—they will shuffle all the way around the feeder trying each hole as if they are sure one will work. Sometimes they’ll just hunker down on the feeder perch and wait. If an oriole happens by, the immature house finch will crouch down and sidle to the opposite side of the feeder as if hiding.

When mockingbirds pass through the tree Buster will buzz at them as well. If a raven is in the area the mockingbirds noisily dive bomb the raven. And if a red-tailed or Cooper’s hawk alights in the jacaranda, all hell breaks loose with mobbing behavior—squawking, aggressive flight (although not too close), and so much noise that on the Zoom call someone will invariably say “whose birds are those?”

Like Buster, all this drama was happening at home before I started working there full time. Early in the pandemic I had towhees, two species of wren, and hummingbirds fly into my living room. Lizards and squirrels walked in the open doors, and the evening I found a raccoon checking out grocery bags near the back door, I immediately ordered screens.

At the Museum, we encouraged everyone to take advantage of the downtime the pandemic created and spend time outside in nature where it was relatively safe. I did the same—hiking and exploring fascinating areas I never before had time to visit. However, I was far more steeped in nature just sitting at my pandemic desk. I’ve started moving back to my perfectly lovely office in the Museum, but I know I’ll sorely miss Buster and the daily circus. 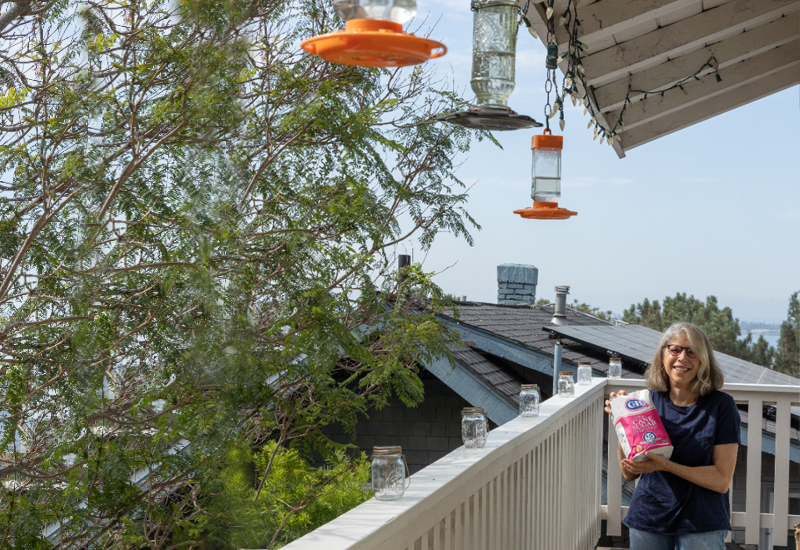 The three feeders getting ready for a refill from my vast sugar supply.​ 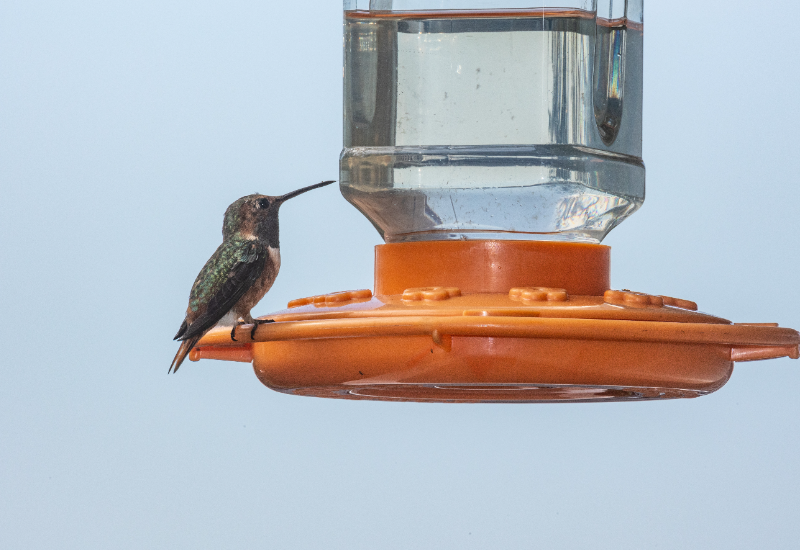 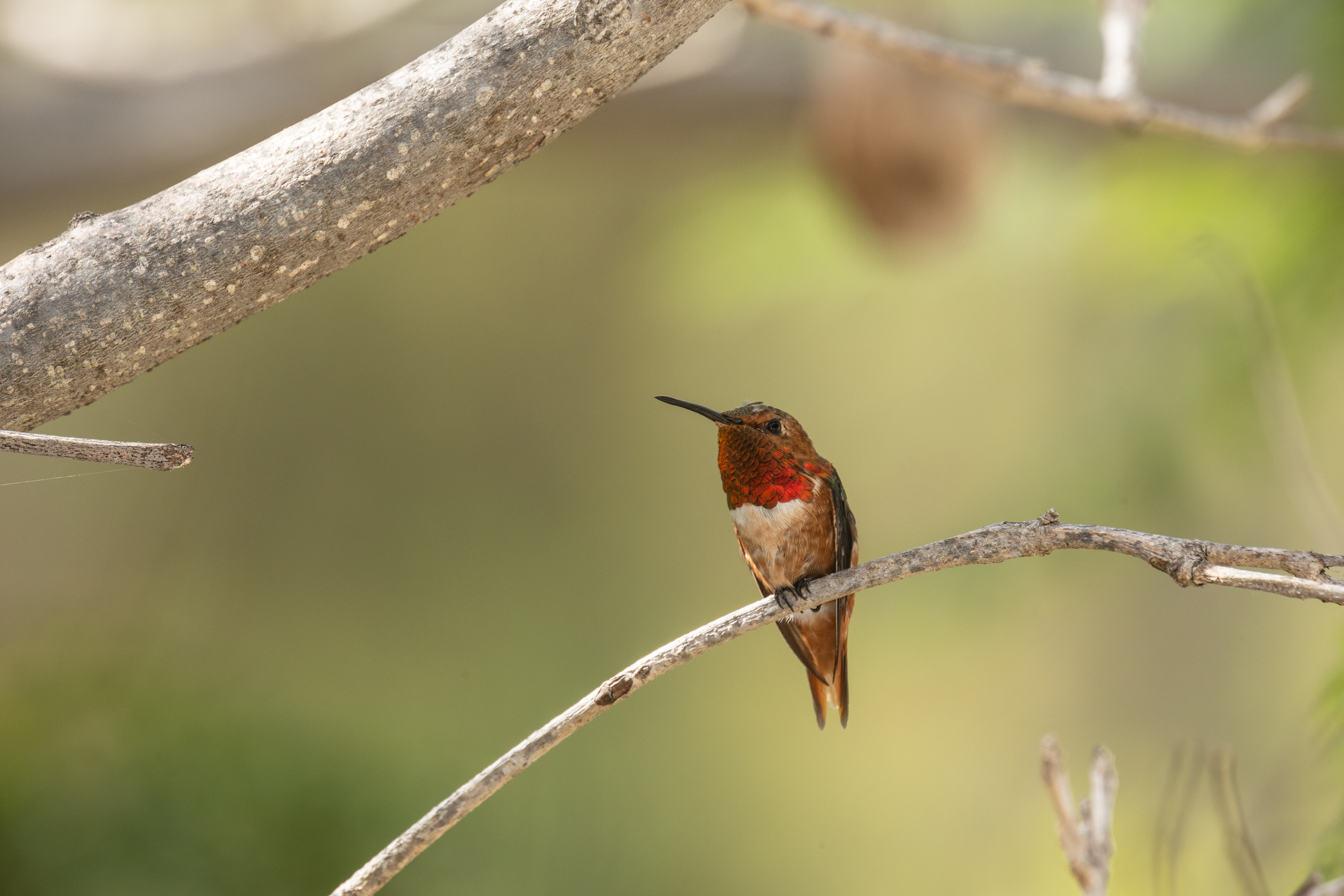 Buster flashing his flame-colored gorget. The color, produced by feather structure, looks black unless he is seen head-on. 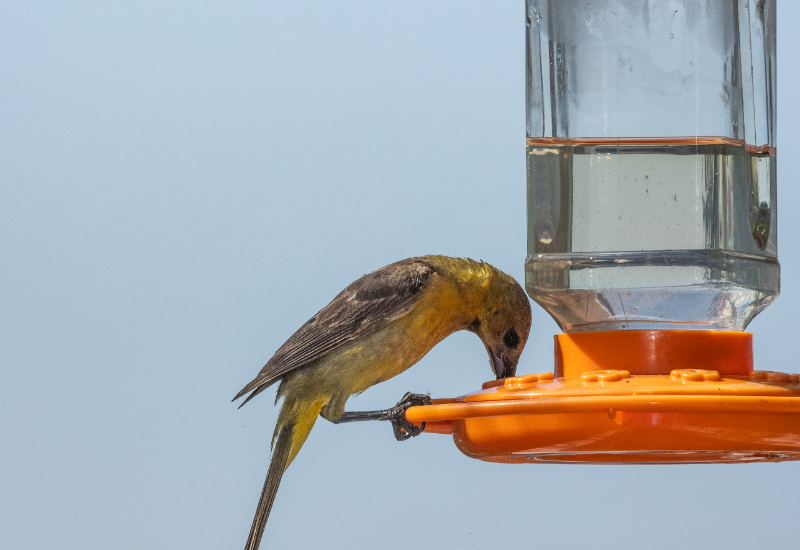 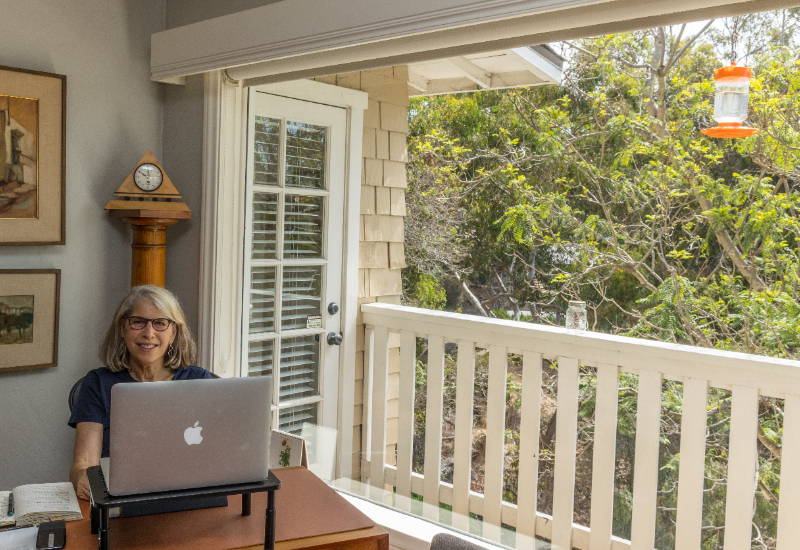 My front-row seat for the bird wars.


Posted by President and CEO Judy Gradwohl on August 4th, 2021