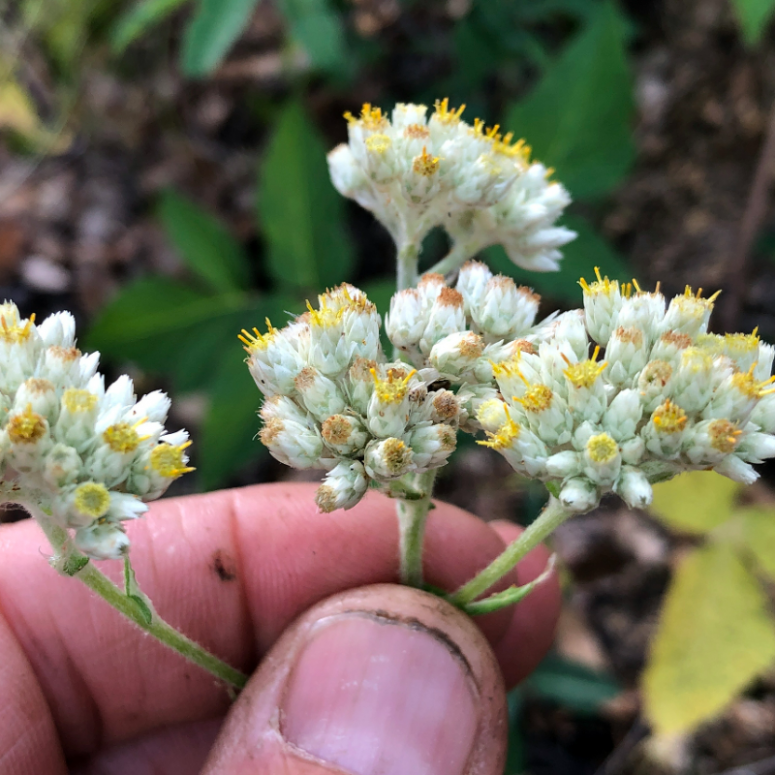 When it comes to discovering new species, our Curator of Botany Dr. Jon Rebman is pretty prolific. He estimates he’s named about 30 species throughout his career—and counting. Whether he’s describing new plants himself, or letting other botanists who visit our collections decide what’s new and what’s not, Rebman’s meticulous notes and identifications are a crucial part of the process.

“We do the best we can based on current taxonomic knowledge and literature,” he says. “But because we are usually working from only a few specimens, we can hedge our identifications by using certain annotations."

Notes like “aff.” or “cf.” indicate uncertainty, or that the specimen is extremely similar to, but not exactly the same as, another named species. Rebman uses these as reminders that there’s still work to be done. He says he often groups his unknown specimens by their taxonomy, or relatedness, so he can pull them all out each time another expert visits the collection.

“Some people don’t like leaving specimens unidentified, so they’ll guess, add it to their collection, and it never sees the light of day again,” Rebman explains. “But allowing them to be question marks, and revisiting them—this keeps the collection alive.”

Indeed, Rebman’s philosophy served The Nat’s botany collection well this spring, when distinguished botanist Dr. Guy Nesom paid us a visit. Rebman’s hope was that Nesom could lend his expertise in the Asteraceae, or sunflower family, to several unidentified specimens from Baja California. Nesom served as curator at the Botanical Research Institute of Texas in Fort Worth for many years, but also spent significant time studying the sunflower group in mainland Mexico.

“Guy had never been to our collection, but he saw one of my digital records of Cirsium, and wanted to be sure it wasn’t a new species,” says Rebman. “While I had him in the collection, I put a bunch of unidentified specimens in front of him and he kept saying ‘Whoa, this is new…This is new…That’s new’.”

Shortly after his visit, Nesom wrote up the descriptions and published them in his digital journal Phytoneuron, which he created in 2010 with the purpose of helping botanists swiftly publish their plant taxonomy and distribution findings at no cost.

In total, Nesom’s visit added six new species to our planet’s list of known plants. For many of them, Rebman’s collections are the designated type specimens, meaning they will forever serve as primary reference material for that species.

Please welcome these six species to the taxonomic table: 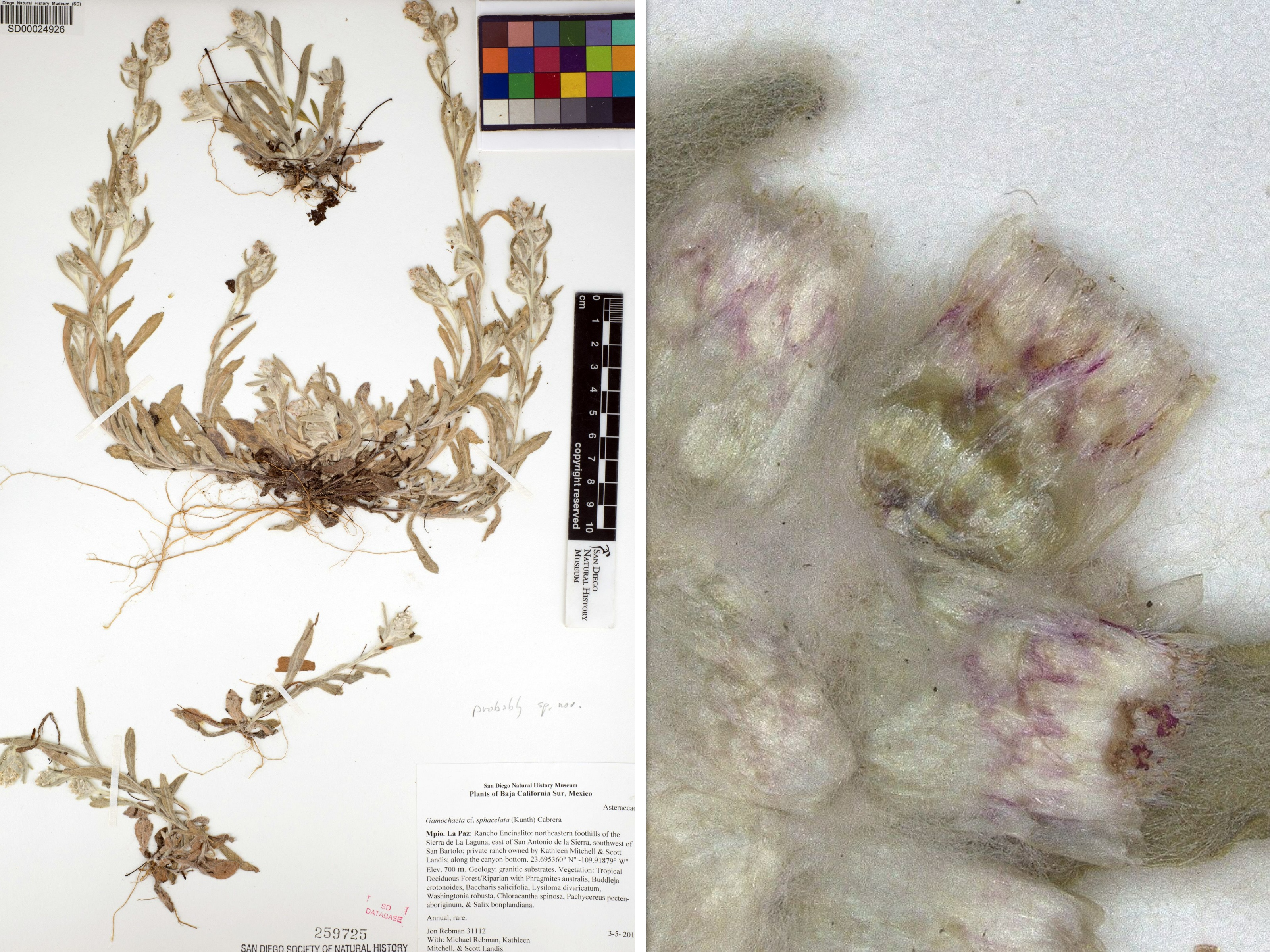 Gamochaeta rubrolinea. This rare plant is currently known from only one collected specimen. It came from a cattle-excluded property in the Cape Region of Baja California Sur, suggesting that it may only survive in areas that aren’t grazed by cows. It is named for the red lines on its calyx (rubro + linea = red + lines), which distinguish it from other similar species. 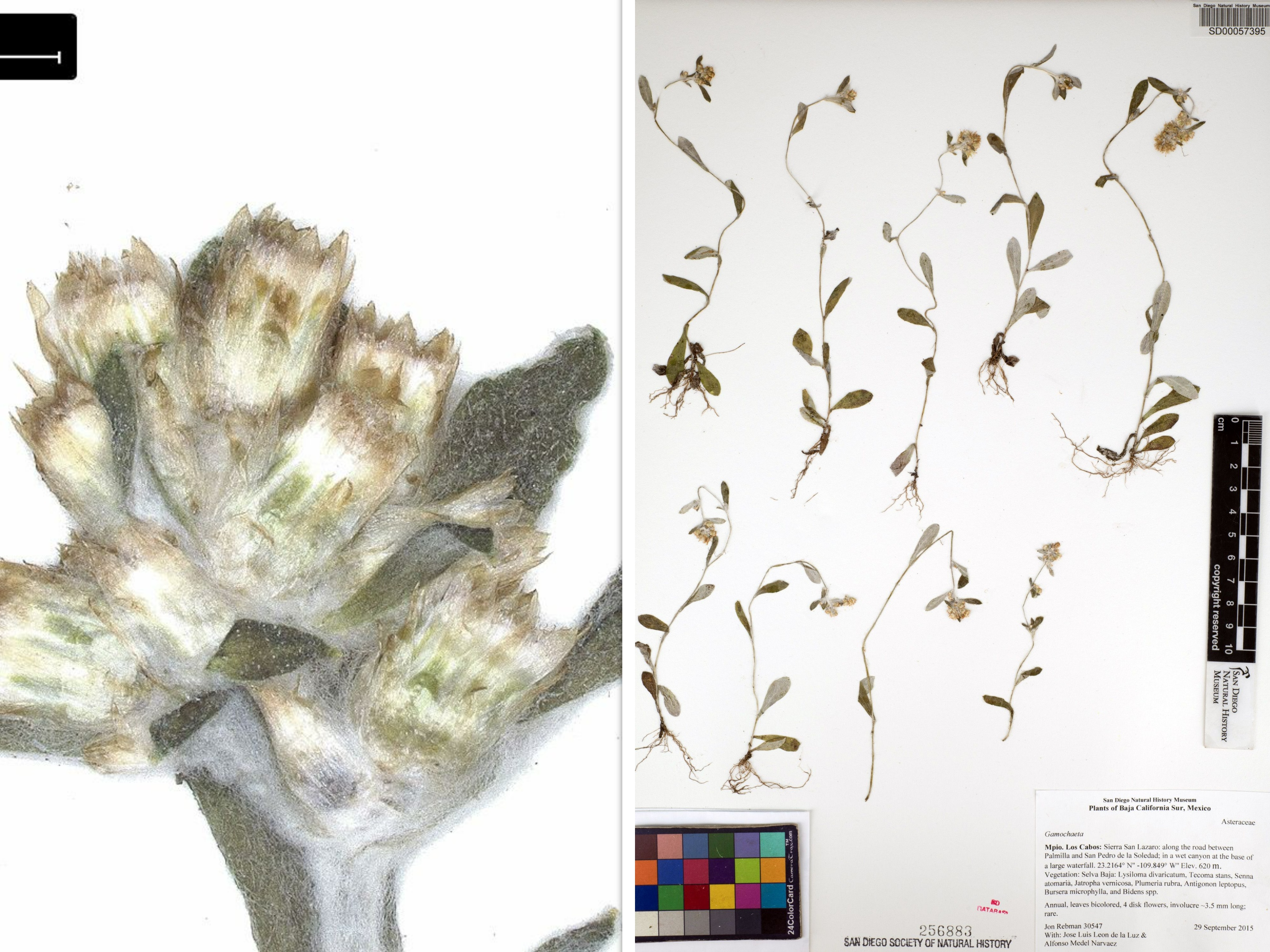 Gamochaeta capensis. Named after the cape region where it was found in 2015, this rare plant lives high in the San Lazaro Mountains. One of the specimens used to describe it was part of an institutional specimen exchange with the Centro de Investigaciones Biológicas del Noroeste in Baja California Sur. Rebman has a strong relationship with the botanical researchers there, and we trade specimens with them all the time. 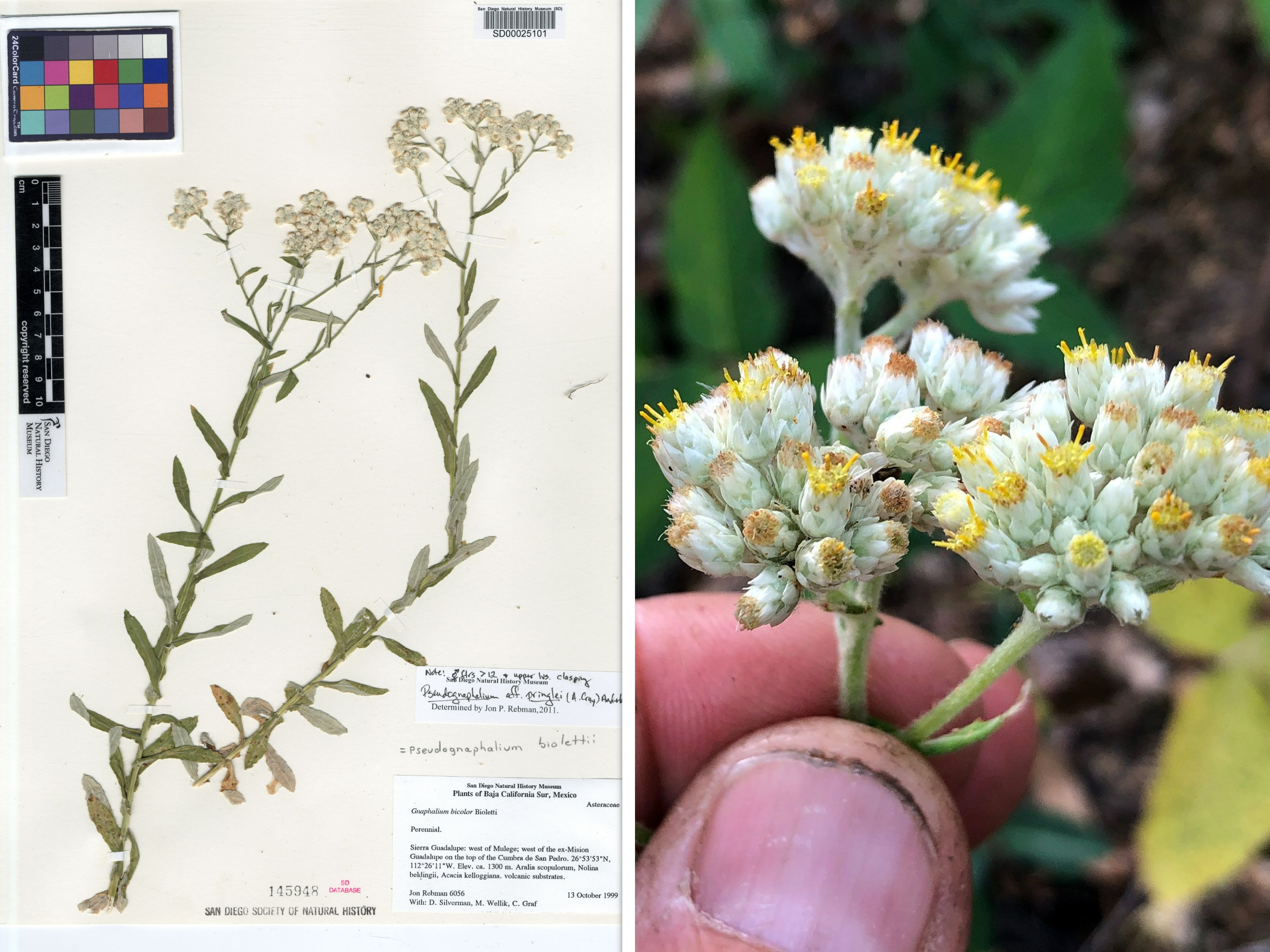 Pseudognaphalium rebmanii. Found in the northern edge of Baja California Sur in 1999, this plant lives in the sky islands—peaks of high elevation that are surrounded by desert scrublands below. The genus Pseudognaphalium is commonly known as rabbit-tobacco or cudweed. Nesom decided to name this species after Rebman because he had done most of the work differentiating it from similar species—Nesom simply confirmed its novel status and wrote up the description. 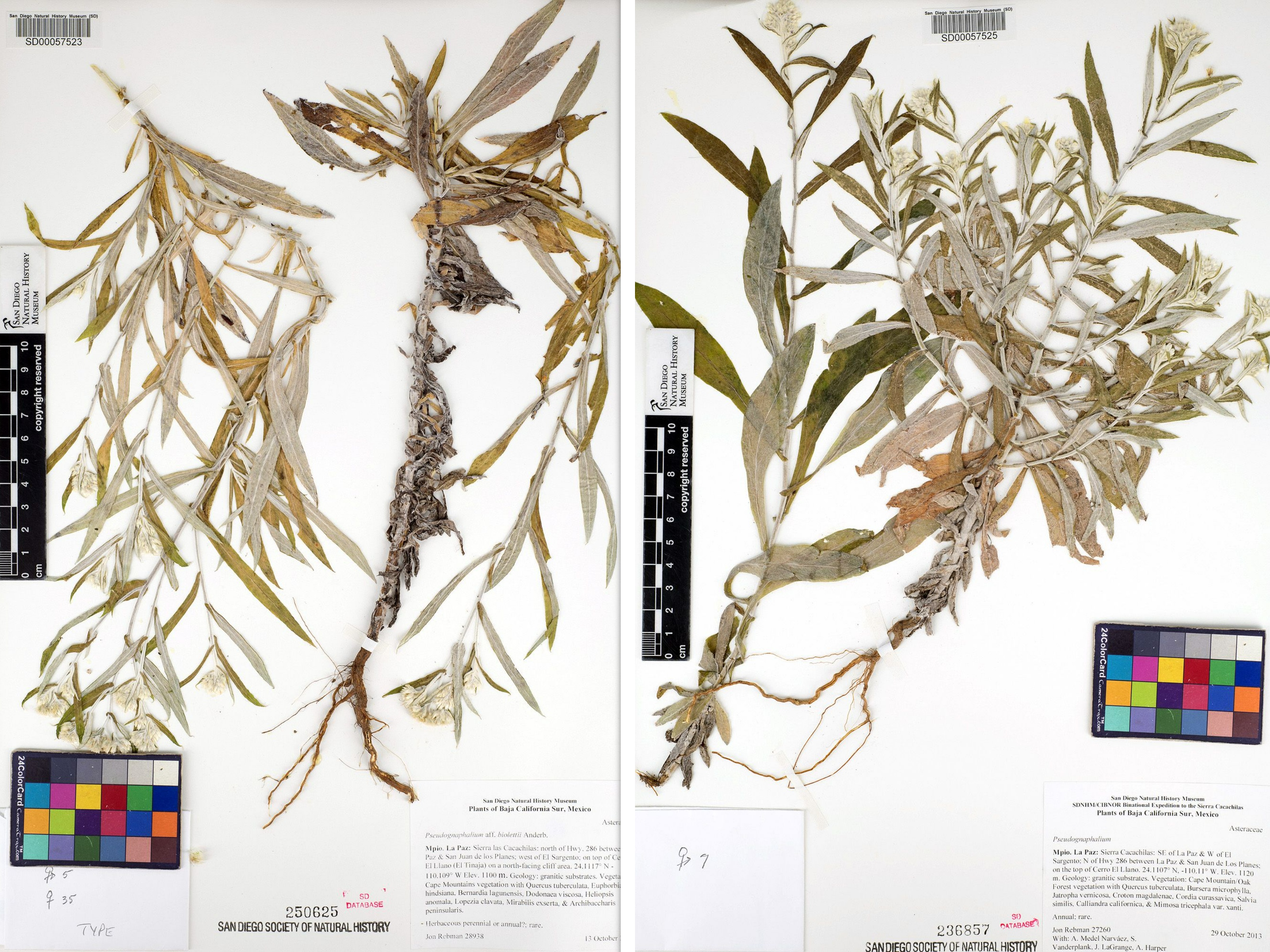 Pseudognaphalium cacachilense. Found in the Cacachilas Mountains in 2014, this plant is known to exist only on the highest peaks of the range. As temperatures continue to rise, many of the plants and animals that require the cooler temperatures of Baja California’s highest elevations are being squeezed upward into a smaller and smaller range. 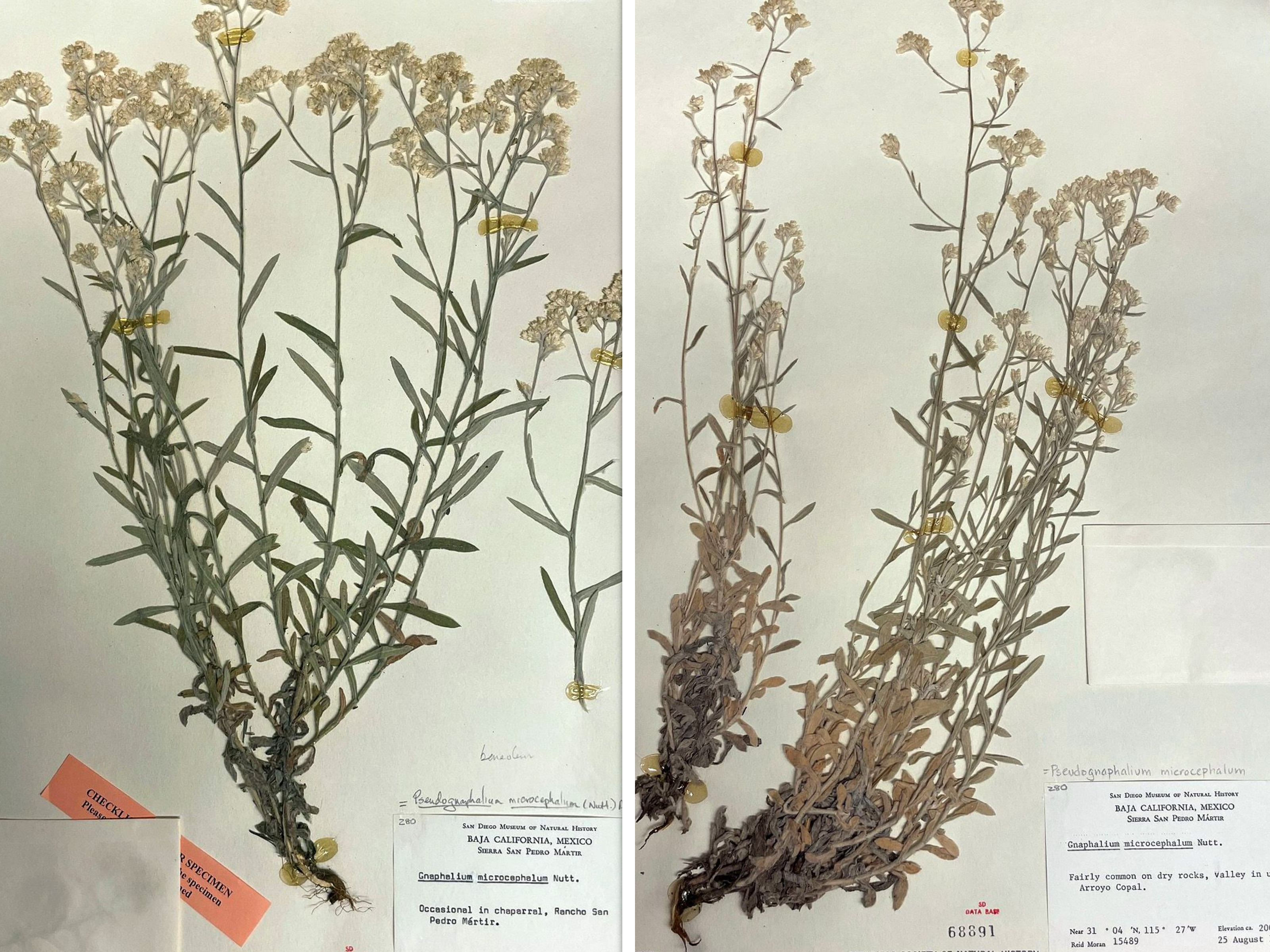 Pseudognaphalium martirense. After 55 years in the collection, this species finally bears a name, and Rebman was the one to describe this species. It was collected by our former botany curator, Dr. Reid Moran, in 1967. Rebman named it after the San Pedro Mártir Mountains where it is found, in northern Baja California. 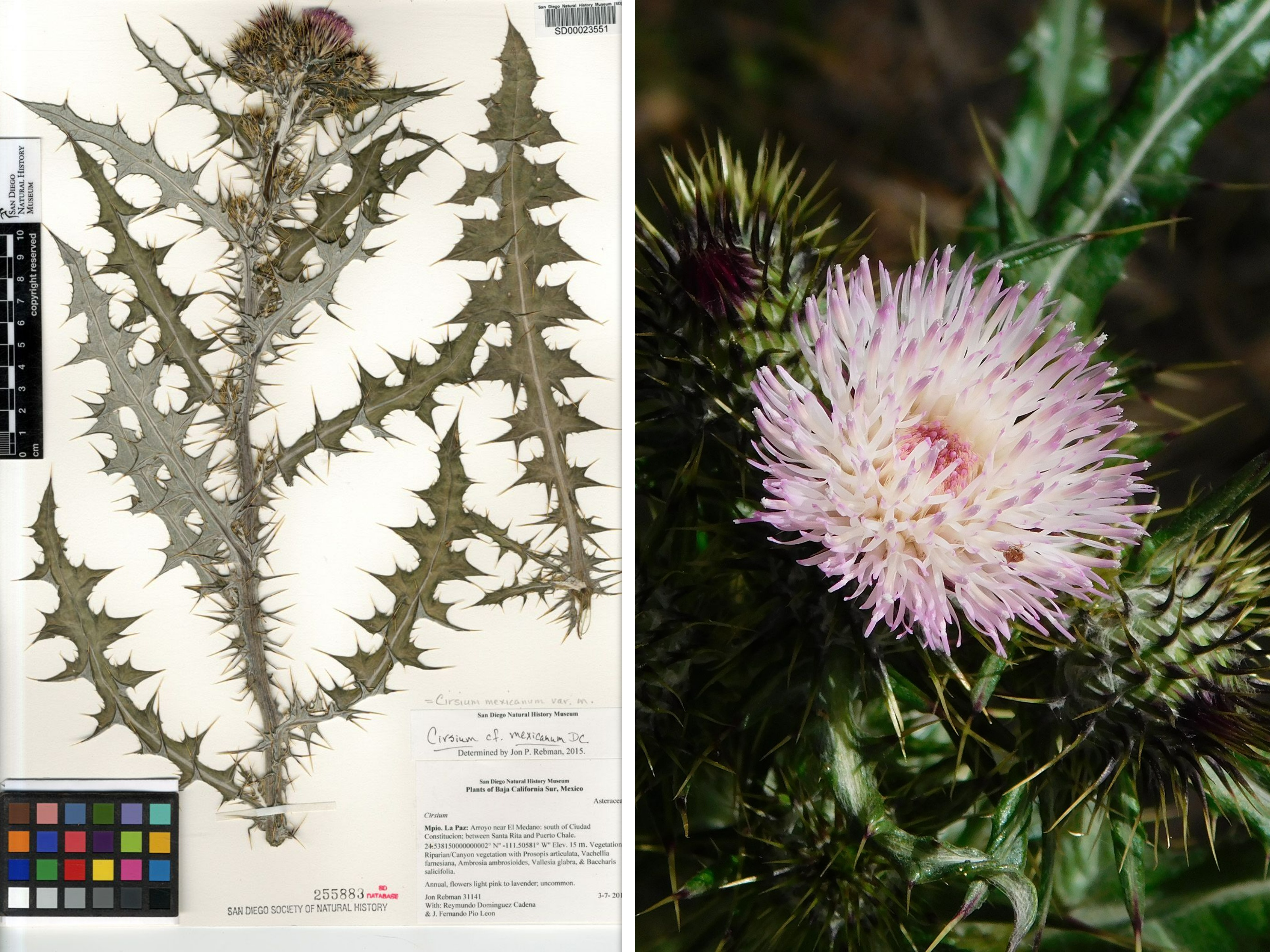 Cirsium magdalenense. A type of thistle, this plant was collected in 2015 from the Magdalena Plains in western Baja California Sur. This is the specimen that originally caught Nesom’s eye and drew him to our scientific collection.

Rebman jokes that if he never went into the field again, he could still discover new species left and right, purely from our vast collection of pressed specimens. “That wouldn't be much fun without the excitement and adventure of field exploration,” he says, so he’s grateful when visiting scholars can lend a helping hand.

For more details on these novel species, click the links below to read their published descriptions.