Identifying New Treatments for Dementia from the Museum’s Plant Collection 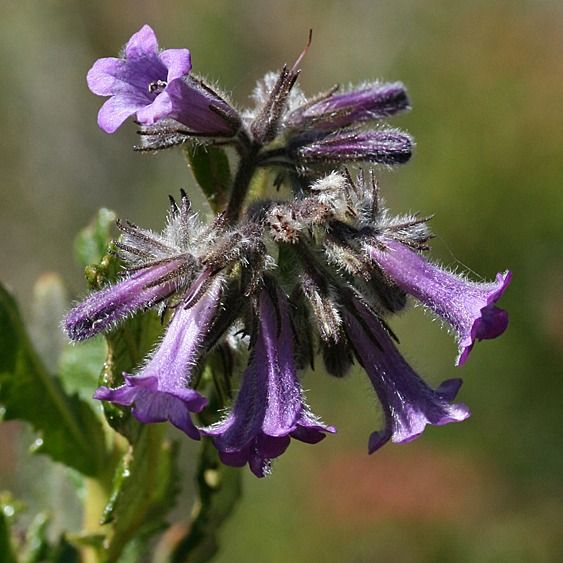 It’s a one-of-a-kind collaboration that may save lives. Researchers at the Salk Institute are working with members of our Botany Department to identify plants that may play a role in combating dementia and Alzheimer’s disease. And they’re doing this research using dried leaf material from specimens within the Museum’s collection.

Salk researchers discovered that a potent neuroprotective and anti-inflammatory chemical, called sterubin, has anti-aging properties that protect neurological cells from breaking down and dying. This compound was originally found in a California native plant called yerba santa (Eriodictyon californicum). Native California tribes have used this plant for its medicinal properties for a long time, but the colloquial term “yerba santa” has been applied to a huge, sometimes unrelated, variety of plants.

Identifying Eriodictyon californicum was the first step, and that’s where our team came in. An herbarium is a systematically arranged collection of preserved (dried) plant specimens and associated data used for scientific study. The Herbarium at The Nat is expansive—it contains approximately 274,000 specimens representing more than 25,000 species collected over a period of 184 years.

Curator of Botany Dr. Jon Rebman and his colleagues at the Salk sourced various yerba santa specimens from the Museum’s herbarium—specimens that were both recently collected and others that were up to 140 years old. Incredibly, many contained sterubin that showed promise in the treatment of dementia.

Salk researchers plan to test sterubin in an animal model of Alzheimer’s, then determine its drug-like characteristics and toxicity levels in animals. With that data, it may be possible to test the compound in humans, albeit from plants grown under standardized, controlled conditions.

Salk Institute and The Nat documented their findings in a paper that was published today in Frontiers in Pharmacology, "The Value of Herbarium Collections to the Discovery of Novel Treatments for Alzheimer's Disease, a Case Made With the Genus Eriodictyon."

This discovery underscores the important yet somewhat unexpected role of museum collections in medical research. Natural history collections are used by researchers around the world to study biodiversity, climate change, and much more. It’s less common that they’re used for medical research—in fact, this is potentially the first time someone has shown this can be done using plants from herbarium collections—but it opens up new possibilities.

Using plants from museum collections saves time and resources. There’s no need to go trekking out into the field to collect massive quantities of a plant for testing. With rigorous curation and record keeping dating back to the late 1800s, the Museum is uniquely equipped to provide plant material resources and to locate the places most likely to have plants researchers might be looking for. And today’s techniques and technology allow for minute amounts of material, even from preserved collections, to be used in the investigation of these chemical compounds.

Rebman has since branched out the search, helping researchers at Salk’s Cellular Neurobiology Laboratory identify other plants that may have promise. Currently, the teams are seeking support to test other plants with medical value.

This partnership is giving us a new way of exploring potential uses for museum collections. After all, The Nat has been preserving these specimens for the future since 1874. Why can’t the future be now? 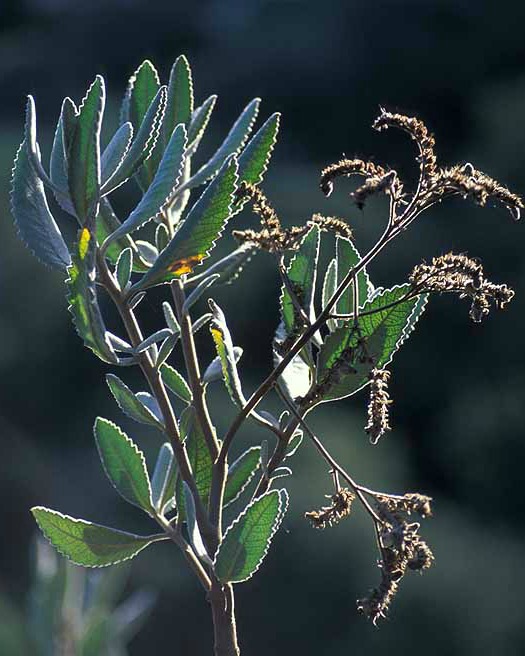 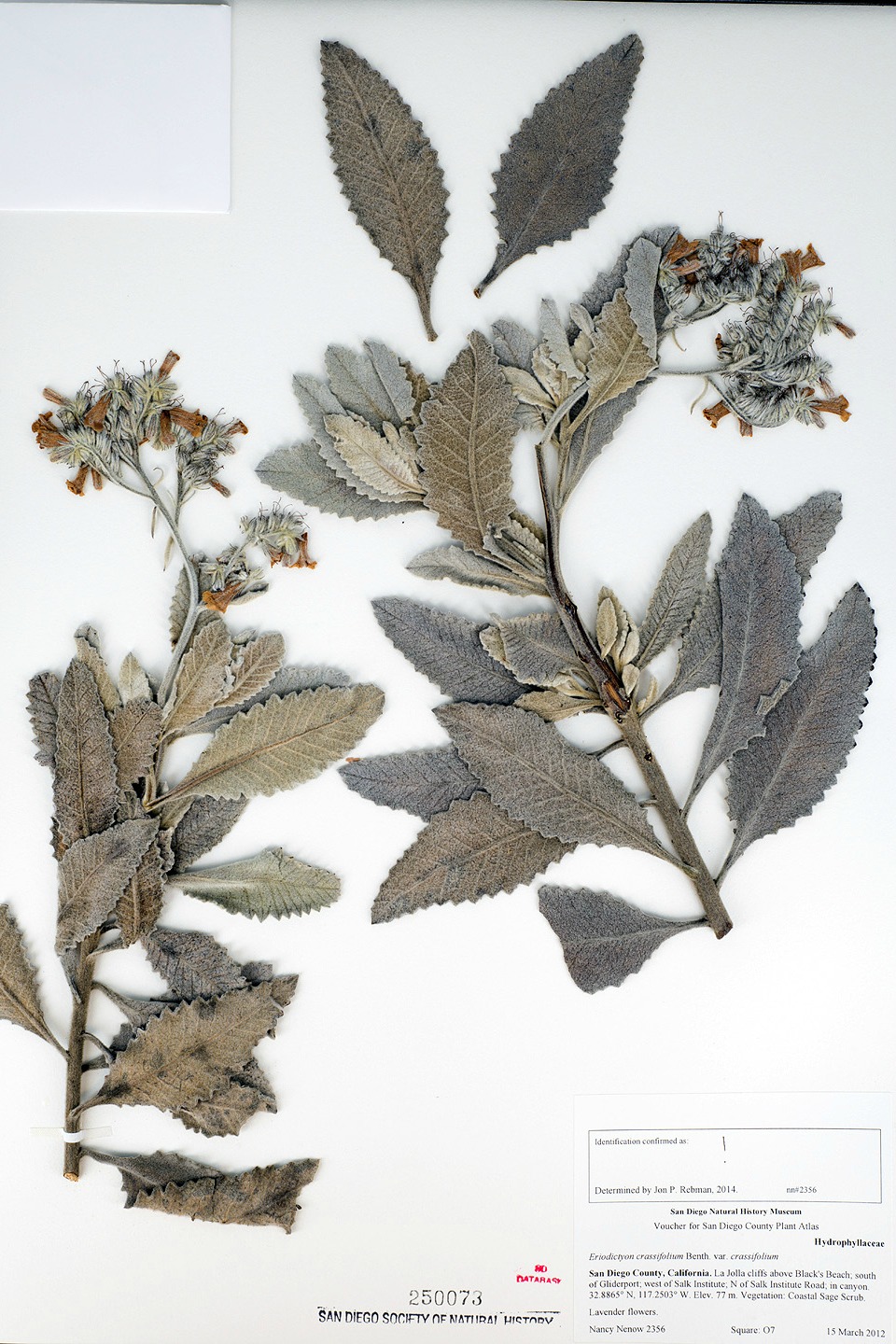 Eriodictyon crassifolium as it appears dried and preserved within The Nat's collection. 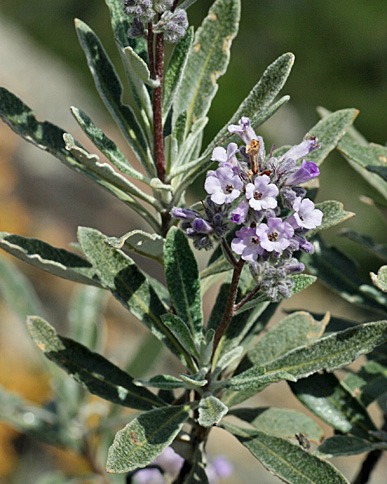 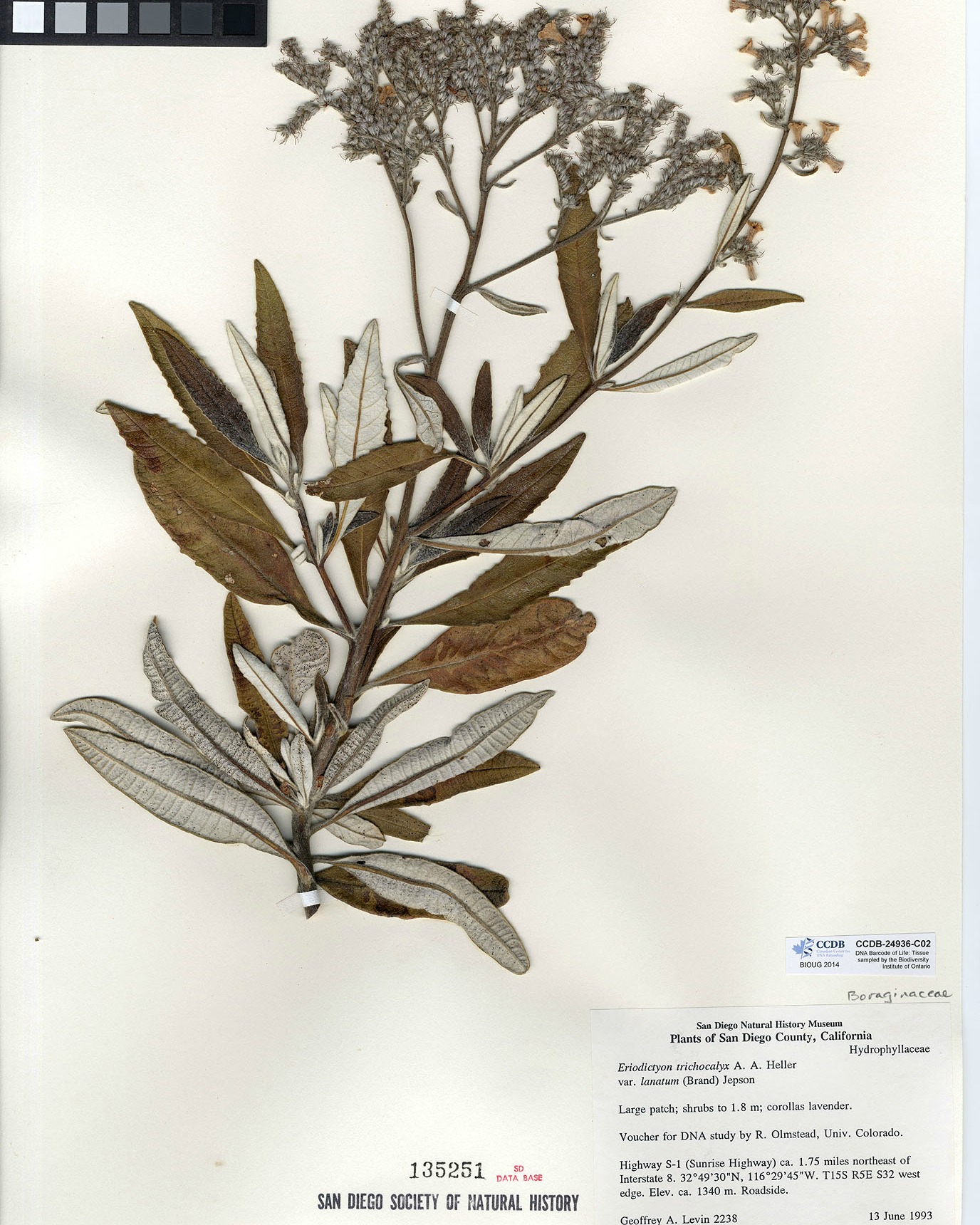 Eriodictyon trichocalyx var. lanatum as it appeared dried and preserved within our Botany collection.