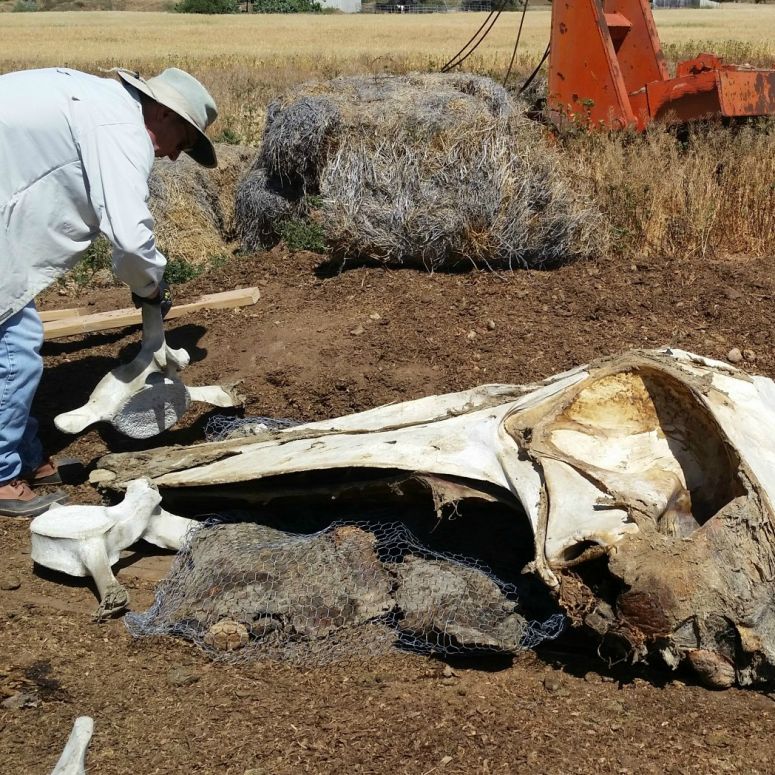 On February 12, 2015, a 30-foot sub adult humpback whale (Megaptera novaeangliae) washed ashore at the tip of Point Loma. Scientists from NOAA’s Southwest Fisheries Science Center (SWFSC) in La Jolla contacted the Museum to ask if we were interested in recovering the skeleton. Over the next nine weeks staff scientists and citizen scientists from the Museum’s departments of Paleontology and Birds and Mammals, together with staffers from SWFSC, the San Diego Zoo, and Cabrillo National Monument worked on the rocky beach (tides and work schedules permitting) flensing the carcass and consolidating skeletal parts above the high tide line. Also helping out were flocks of scavenging sea gulls and lone pelicans, the sun and surf, and omnipresent bacterial decomposers.

Over this period some bones ended up clean enough to haul up the cliff using ropes and pure muscle. However, the rest of the skeleton including the skull—measuring almost 6 feet long and weighing close to 250 pounds—remained on the beach as a major logistical challenge. The challenge was solved on April 14 when a Coast Guard Sector San Diego MH-60 Jayhawk helicopter and crew came to the rescue and airlifted the skull off the beach as part of a training exercise. Other whale parts were manhandled up the cliff using the many helpful hands of the assembled crowd, which turned out for the media event. The skeleton was then transported to an inland site for temporary burial and dermestid beetle processing, and a final round of maceration. Eventually, the skeleton will be brought back to the Museum and catalogued into the research collections of the Department of Birds and Mammals.

It turns out this is not the first time in recent years that Museum scientists have worked with stranded baleen whales. In December 2014, the carcass of a 15-foot Bryde’s whale calf (Balaenoptera edeni) was found floating in San Diego Bay, and in October 2014 the body of a 23-foot female humpback whale was found stranded on the beach at Marine Corps Base Camp Pendleton. In both cases, the Museum was again contacted by SWFSC and in both cases staff scientists from the departments of Paleontology and Birds and Mammals responded. And, back in January 2012 a 13-foot gray whale calf (Eschrichtius robustus) washed ashore on the beach at Moss Landing near Monterey, California. However, this time the Museum, working in collaboration with scientists and students in the Department of Biology at San Diego State University (SDSU), was only able to obtain the whale’s frozen head.

So, why is the Museum interested in these specimens? Obviously, the death of an animal as majestic as a humpback whale or gray whale is a sad event. However, as Museum scientists interested in documenting the natural biodiversity of our region and in increasing our understanding of the evolutionary and ecological history of that biodiversity, we view such events as learning opportunities.

In the case of the Bryde’s whale calf, we were given a rare opportunity to study and sample a specimen of this uncommon species of baleen whale. The skeleton of this whale has now been completely cleaned and recently catalogued into the Museum’s research collections as perhaps the only complete skeleton of a Bryde’s whale from California coastal waters.

In the case of the gray whale, the Museum/SDSU team conducted a detailed series of muscle-by-muscle dissections and carried out additional analyses, including CT imaging and histological sampling. The research results of this work were published in April of this year in a special issue of the journal, The Anatomical Record. Separate technical articles in this special gray whale issue focused on the structure and distribution of facial hairs (vibrissae), the gross anatomy and musculature of the tongue, the musculature and functional anatomy of the lower jaw joint, the pattern and anatomy of palate vascularization, and the structure and comparative anatomy of baleen.

The amazing thing about publication of this basic anatomical work is that it had never been done before for gray whales, in spite of the fact that gray whales have been known to science for hundreds of years. Stepping back and placing the knowledge gained from this work in an evolutionary context reinforces our understanding that organisms (including whales) carry within their bodies evidence of their evolutionary history—the retention of facial hairs in fully aquatic mammals, the retention of deciduous teeth in fetal baleen whales, the retention in vestigial pelvic bones, and the co-opting of arteries and veins originally associated with teeth to a new role supplying blood to the baleen plates.