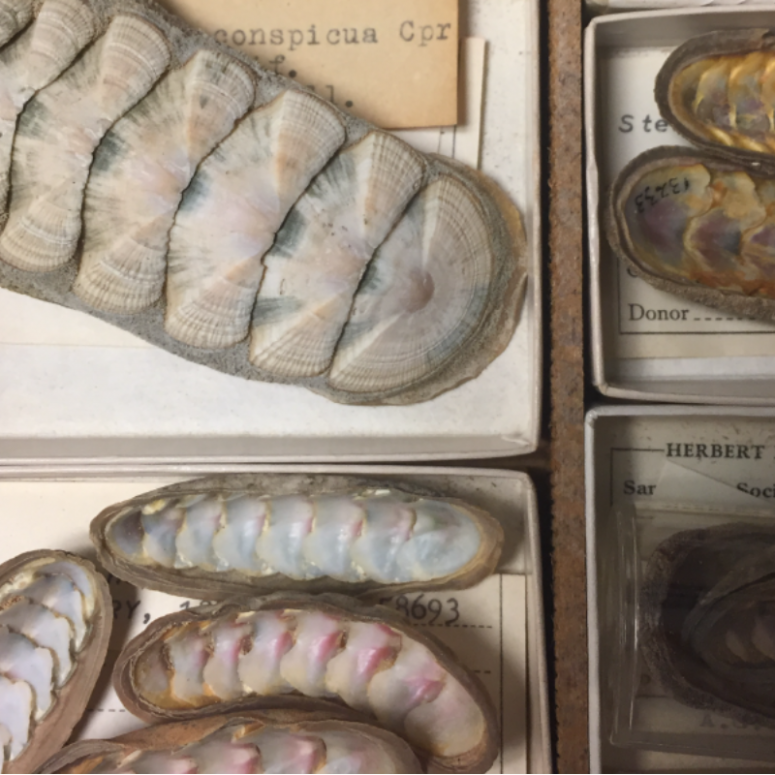 Pamela Horsley happily returned to The Nat in 2020 as entomology collections manager and collections registrar—she previously worked here from 2009-2012 as part of a National Science Foundation grant to curate and increase the accessibility of the entomology collection. Upon her return, Pam spent time exploring our extensive collection of marine invertebrates. Learn about what she discovered—or rediscovered—and how we are working to make the collection more accessible to other scientists and the public.

As a collections manager and registrar, I have a keen interest in the best practices and management of pinned, slide, and fluid-preserved invertebrate collections. So when I came back to The Nat, I took a deep dive into ours.

After spending some time digging up the rich history and poking through many of the drawers, I am blown away by the interesting specimens we conserve and have a new appreciation for this incredible collection.

Not everyone knows we have a marine invertebrate collection, but we do, and it’s huge! Estimated at nearly 5 million specimens, it contains primarily gastropods (snails, limpets, etc.) and bivalves (clams, mussels, cockles, etc.) housed in trays and vials within 108 steel cabinets.

The collection has taxonomic strength in Mollusca and Crustacea and geographic representation from around the world, with particular concentration on the Philippine Islands, Cuba, Panama, and the eastern Pacific, including California and Baja California.

It is also regionally strong for collections predating World War II, representing an important snapshot of this area before the Baby Boom, contemporary climate change, regional fishery depletion, and other environmental declines.

The marine invertebrate collection was among the first active collections at the Museum and dates back to the founding of the San Diego Society of Natural History in the late 1800s. Shells donated from this time were from “False Bay,” which today is known as Mission Bay. This area used to be marshland, and the specimens we have are important records about the habitat before it was developed into the recreational playground we know today.

A number of notable malacologists—people who specialize in the study of mollusks—have contributed to and influenced our collection.

Among the first collections donated were from Henry Hemphill, a local amateur collector, who sadly died of arsenic poisoning while curing shells. In 1910, Kate Stephens, an authority on terrestrial and marine mollusks of the San Diego area, was hired and later served as the first Curator of Mollusks and Marine Invertebrates (the Museum was ahead of the times in hiring awesome women!). Along with her husband, Frank Stephens, who was a mammalogist, one of the Museum’s founders, and its first director, they helped influence and shape the early museum we all love today. Between 1913 and 1938, the Stephens duo and Dr. Fred Baker (also a founder of the Scripps Institute in La Jolla) added thousands of specimens to the collection just before the Museum shut down and became the infectious diseases ward for the U.S. Navy during the World War II.

Post-war, the Museum hired Emery P. Chace, who helped lead the Belvedere Expedition to the Gulf of California islands in 1962. Later, in 1968 George Radwin was hired and changed the name of the department from the Department of Conchology (the scientific study or collection of mollusk shells) to the Department of Marine Invertebrates (expanding to studying mollusks as whole organisms). At this time, our shell collection was one of the top 10 in the United States.

Side note: Yes, mollusc or mollusk are both acceptable spellings for the phylum Mollusca, which is the second-largest phylum of invertebrate animals after the Arthropoda (<-- my="" main="" jam="" ------="">

Back to some history...Following Radwin’s unexpected and sudden death in 1977, Anthony (Tony) D’Attilio became Acting Curator, a position he held from 1980 through 1987, except for two brief periods when other full-time curators were in charge of the Department. It was during this time that Carole Meisner Hertz and Barbara W. Myers (whom we lovingly referred to as the “Shell Ladies”) began volunteering, using their vast knowledge to work through the archives, updating taxonomy and curating some of the largest and coolest groups in the collection.

The last curator in charge of the marine invertebrates collection was Dr. Richard (Rick) Brusca who served from 1987 to 1993, making it nearly 30 years since the collection has had dedicated staff to help manage it.

Today, employees are working to increase access to the specimens and improve the integrity of this unique and underutilized collection. We’re currently working on a project to digitize 90,000 catalog cards and extract the data using optical character recognition (electronically converting images of typed, handwritten, or printed text into machine-encoded text) in order to populate the first ever specimen-level database for this collection.