Curatorial Milestones at The Nat 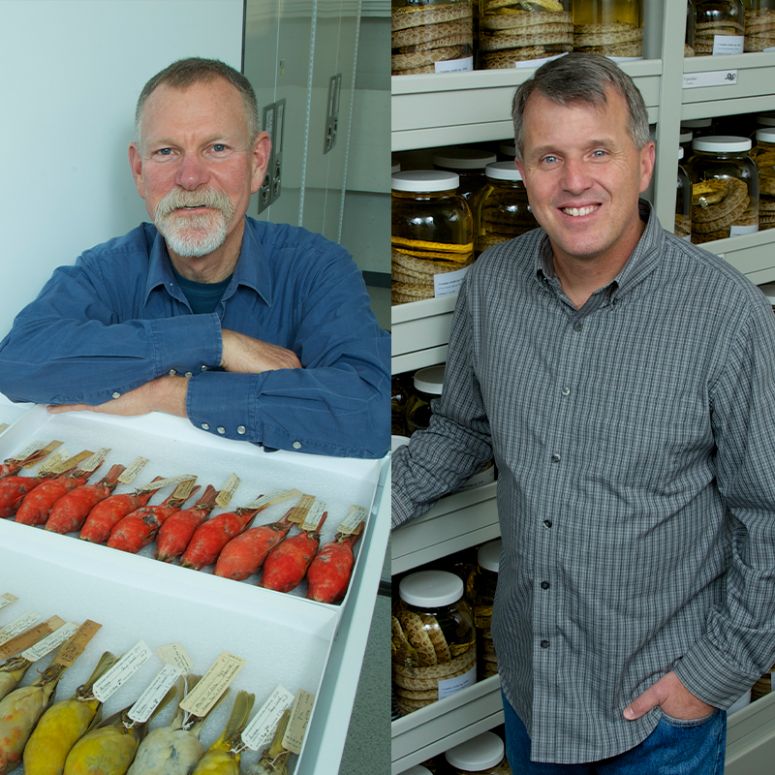 The Museum is delighted to celebrate milestone promotions for two of our long-time curatorial staff members. Phil Unitt in the Birds and Mammals Department and Dr. Brad Hollingsworth in the Herpetology Department were promoted from associate curator to curator in fall 2019.

Phil Unitt started at the Museum as a volunteer in 1974 where he met Amadeo Rea, the curator of Birds and Mammals at the time, who became his mentor. They remained in contact, even after Phil left the Museum. Finally, after returning to San Diego in 1984, the opportunity to work with the Birds and Mammals Department again presented itself, and Phil has been with the department ever since. As our resident citizen scientist, Phil has published 65 papers and performed 34 studies relating to the birds of San Diego County, many of which are endangered species.

One of Phil’s most notable accomplishments is the completion of the San Diego County Bird Atlas, one of the most ambitious research projects the Museum has undertaken. It was a multi-year project that involved an incredible amount of field work and assistance from hundreds of volunteer naturalists. Some credit the Bird Atlas with starting the modern era of citizen science. The atlas is both a book and an online database, and provides a comprehensive list of all known resident birds of San Diego County, including those that pass through during certain times of the year. With this atlas, the birds of San Diego County are now among the best known in the world.

In addition to his role at the Museum, Phil has served as the editor for Western Birds, the regional journal of ornithology for western North America, since 1986. From the beginning, he has enthusiastically supported the goal of the publication, which is to produce articles that contribute significantly to scientific literature and that are useful and accessible to professional and amateur field ornithologists. Many citizen scientist birders have made important scientific contributions to the field, and Phil has especially appreciated the fact that Western Birds speaks to both of these important and collaborative audiences.

Brad Hollingsworth started at the Museum in 1988 as a volunteer and became a curator in 2000. Over the years, he has made notable contributions to the institution as well as the field of herpetology. He has authored more than 130 scientific publications including peer-reviewed articles, book chapters, technical reports, conservation assessments, and field guides.

While Brad’s research focuses on understanding our biodiversity and the origins of the region’s herpetofauna, he is also deeply involved in conservation issues effecting amphibians and reptiles in peril. Some of the species Brad focuses on include the Arroyo Toad, Flat-tailed Horned Lizard, island iguanas, and California Red-legged Frog. Brad serves with the International Union for Conservation of Nature with their Iguana Specialist Group and is a founding board member for Fauna del Noroeste, A.C., a conservation group located in Baja California.

One of Brad’s most distinguished accomplishments is merging the citizen science observations from iNaturalist with the Museum’s historical collection data in the Amphibian and Reptile Atlas of Peninsular California. The Atlas has a comprehensive coverage of the amphibians and reptiles of southern California and Baja California and through its interactive mapping system serves as a portal to the department’s collection database. At the moment, he is digitally photographing more than 60,000 specimens, so everyone can see the specimens in our collections. After two decades of collection improvements, our amphibian and reptile biodiversity data is now readily accessible to both the scientific community and public.

The San Diego Natural History Museum is grateful for Phil and Brad’s work, dedication, and many years of service.