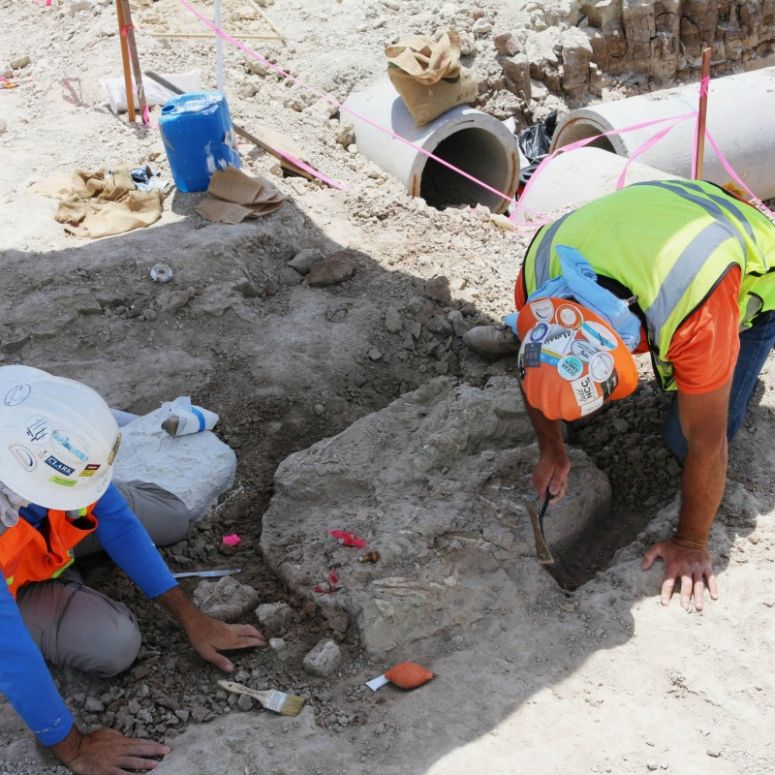 An unusual fossil deposit containing skeletal remains of extinct mammals—including camels, oreodonts, rodents, and possibly a large carnivore—was recently unearthed by The Nat's Paleo Services team at a construction site for new U.S. Land Port of Entry in Otay Mesa. The project is a joint venture between Caltrans and the San Diego Association of Governments (SANDAG), and will result in a new 21st century border crossing.

Our Paleo Monitors are critical “first responders” who are responsible for spotting potential fossil remains at local construction sites. They say the fossils from this site appear to be from a new geological formation that has not been mapped before in the area. The deposit also contains plant fossils as well as volcanic bombs (masses of rock ejected by a volcano).  This newsworthy discovery was covered by the San Diego Union-Tribune and Channel 10.

The Nat team excavated the fossils and brought them to the Museum, where they will open and prepare field jackets from the site and catalogue the fossils into our collection for future study.

Fossil preparation has only just begun, but has already uncovered some interesting fossils from the early to middle Miocene (between 20 and 13 million years old). The terrestrial mammals include at least two lineages of horses—one being only about 3 feet tall and having three toes on the feet as opposed to the single toe of the modern horse. Also exciting is the recovery of upper and lower teeth and jaws of an ancient camel and lower jaws with teeth of an as-yet unidentified carnivore.

These specimens will contribute to our extensive knowledge of local paleontological history. Every fossil discovery leads to a deeper understanding of evolution and how life has changed over time. They allows us to recreate a picture of what life was like in the past and come away with lessons about in the interaction of climate, ecosystems, and species survival or extinction.